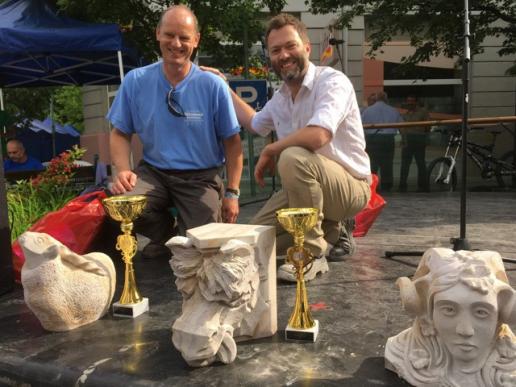 Brits took the top two places in the European Stone Festival this year, but that’s just the icing on the cake, says Maya Martin. 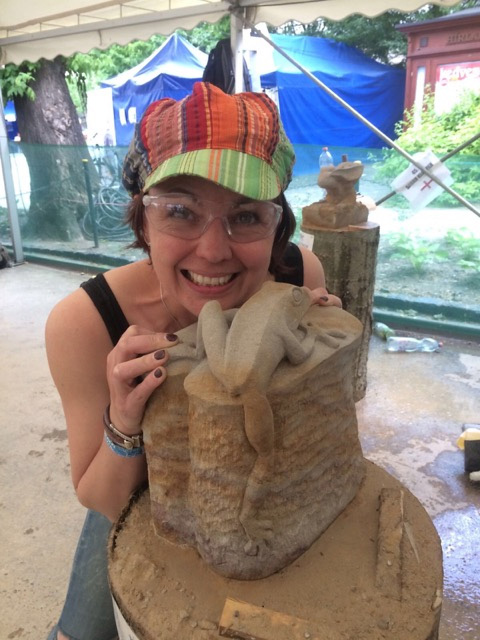 Maya Martin is a British stonemason living in Hampshire with her young family. She qualified from Weymouth College in 2012 and is now self-employed, taking commissions and working as an assistant to independent stone carvers and memorial artists. She also runs stone-carving courses around Hampshire and Wiltshire. She has a long-term ambition to develop her own thriving business and open her own workshop. If you want to employ her stonemasonry or carving skills, email her at [email protected]. You can find more information about Maya and her work on her MAYA STONE Facebook page (@Mayamartinstonecarver).

This year’s annual European Stone Festival was hosted by the town of Kiskunfélegyháza in Hungary. It was the fourth European Stone Festival I have participated in and this year I was excited to discover that the location was in a country I hadn’t been to before and in a smaller town outside the capital. It seemed exotic and far away, with a history quite different from home.

The first European Stone Festival took place in 1999 in Freiburg, instigated by the stonemasonry college there. It has grown in popularity over the years and been hosted by many different European countries, including twice in England (at Canterbury and Lincoln).

I travelled to Hungary ahead of the Festival to spend a day exploring Budapest, strolling along the banks of the Danube and admiring some of the beautiful neogothic architecture. 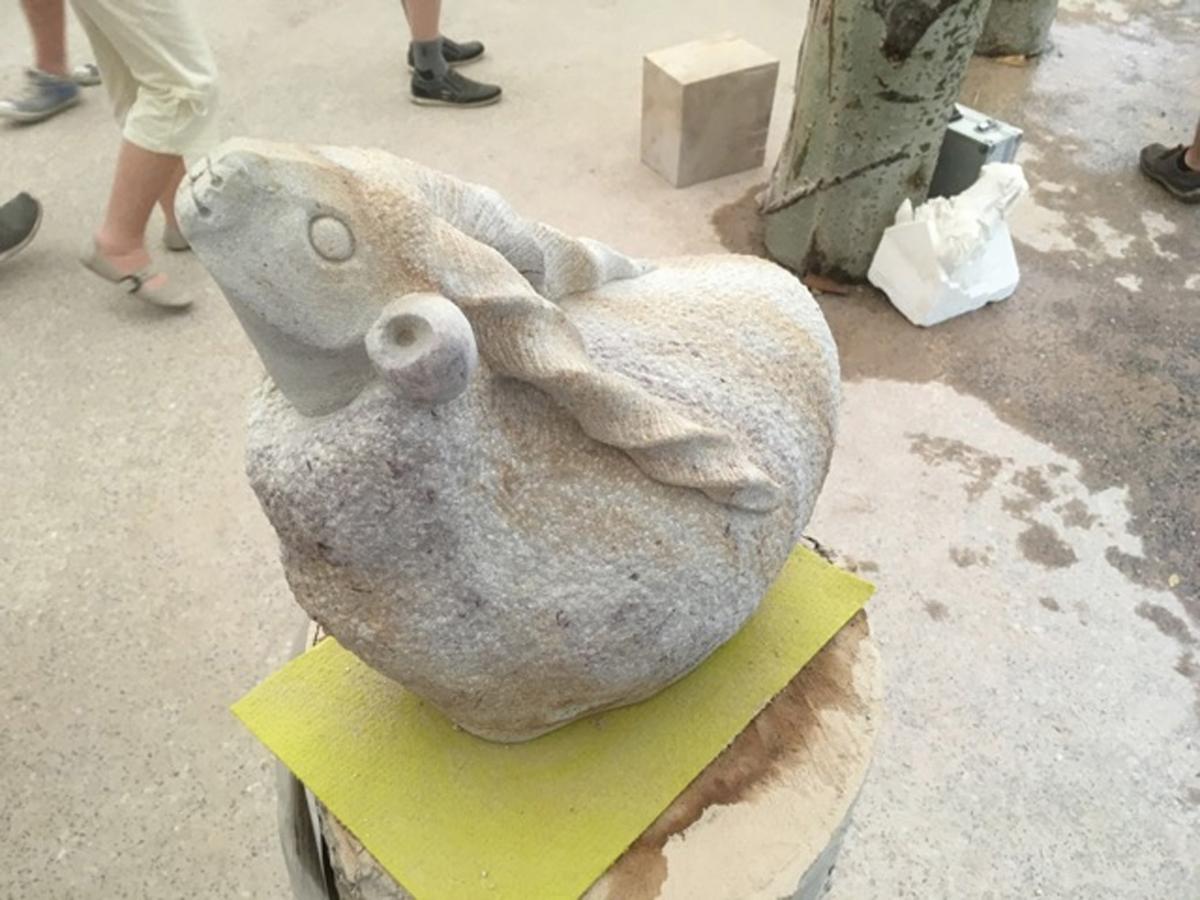 Kiskunfélegyháza, with a population of approximately 30,000, is 130km south-east of Budapest in the middle of the Puszta, a grassland biome on the Great Hungarian Plain, which we looked out on as we travelled there by train. This was fascinating, especially as the theme of the festival was ‘Secession and Life on the Puszta’. Preparing our designs meant we’d all read about the Puszta in the months approaching the festival, learning about the people, their way of life and the wildlife.

The ‘secession’ part of the theme refers to a period in art history beginning in 1897 in Austria and Hungary paralleling the Art Nouveau period in France. It incorporated sculptures, paintings, architecture and interior design, and became increasingly popular in the early 20th century. Gustav Klimt and Egon Schiele are among the best known secessionist artists.

Although participants in the festival are bound to the theme, it leaves plenty of room for interpretation. It is an opportunity to carve something to your own design, using your own inspiration and ideas.

You have the springboard of the theme to get you started but then you can let your imagination take over. Participants are able to demonstrate not only their skills but also their creativity.

For me, it’s really important to find something I’m going to thoroughly enjoy and feel proud of creating. It wasn’t easy to decide what to make. I had designed a few pieces and made clay maquettes. But my heart wasn’t in it until the idea of a frog climbing on to a lily leaf came to me. I was inspired by wildlife photos of real life frogs and pictures of secessionist earthenware.

In Kiskunfélegyháza we arrived at a large marquee in a prime position in the town centre, next to the beautiful secessionist town hall. This was a perfect location for the stone Festival and there was a real buzz in the air – a sense of anticipation about the weekend ahead. 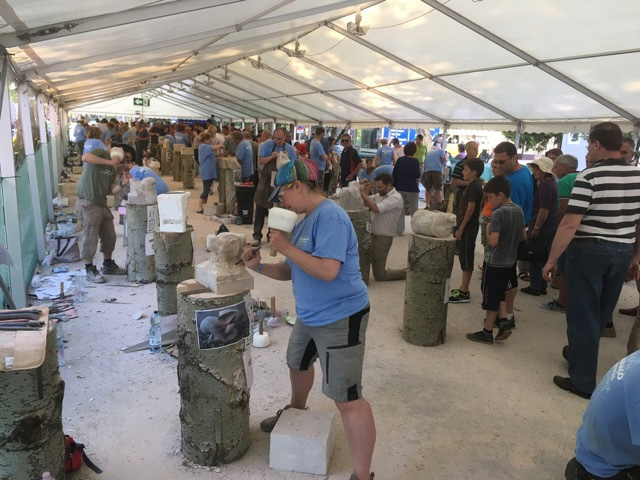 The first thing we did was to choose our stone and write our name on it in a wax crayon. Everyone was determined to get a good stone with the right dimensions for their design and no vents or grizzly bits. For some it was important to find a squarely cut piece to apply templates.

I had read the articles about the previous years’ European Stone Festival written by reigning champion Alex Wenham. Having travelled out to Hungary with Alex, I knew I was in the company of a more experienced and accomplished carver than I am. I welcomed his advice and encouragement, particularly in choosing a stone. It paid off.

My piece of stone was a sandstone with beautiful purple and brown streaks running through it. It was consistent and predictable, not too hard or too soft and nice to work. Not everyone was so lucky.

The public turnout for the opening ceremony was impressive, especially as it started at eight-o-clock in the morning.

The Festival was organised by the Hungarian National Trade Association of Stone Carvers & Producers of Cast Stone, together with the Kiskunfélegyháza Town Council. The Mayor of the town, Csanyi Jozsef, expressed how proud the town was to be hosting the festival. 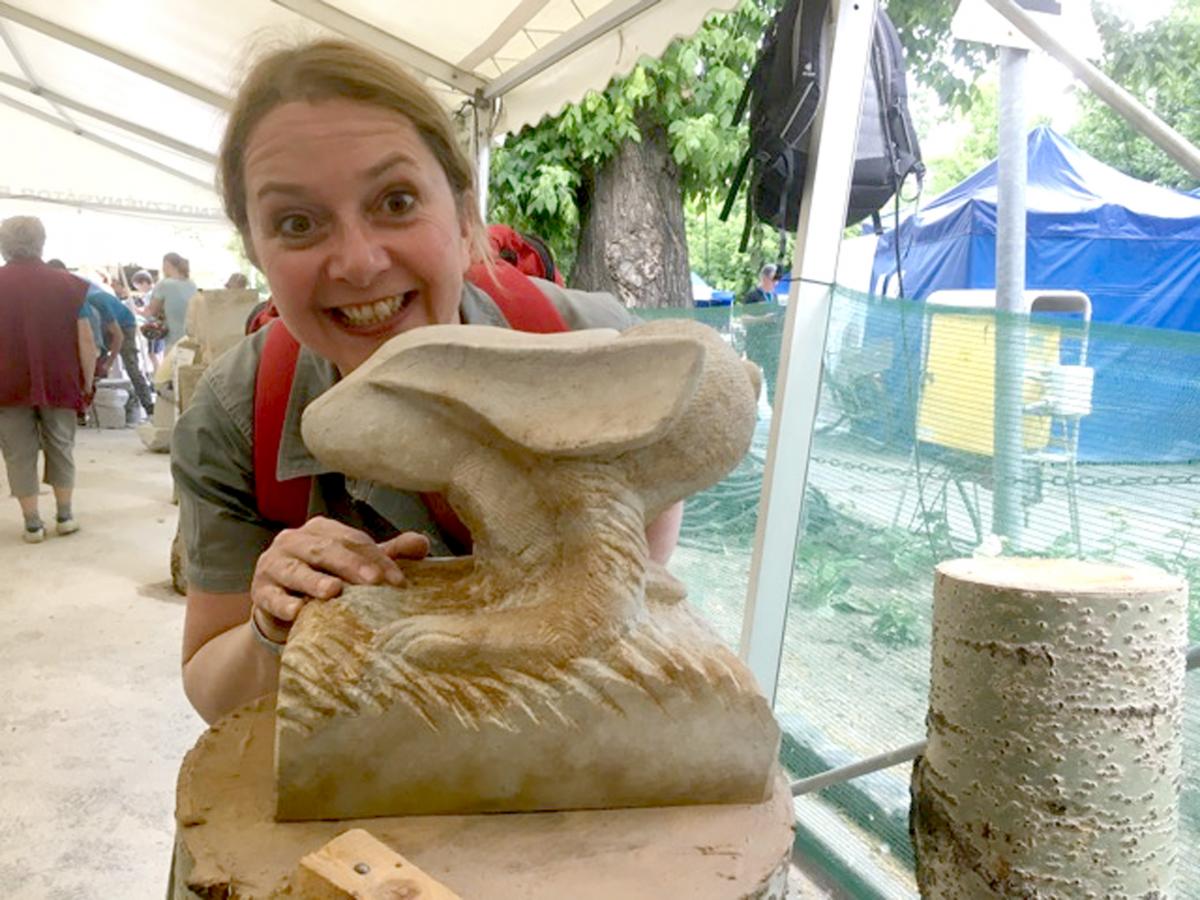 The atmosphere on that first morning was electric. More than 100 stonemasons feverishly bashing stone and removing waste, accompanied by folk music, song and dance from Hungarian performers.

It’s almost freeing to be under so much pressure to complete your work in the two days of the event – it stops you being over analytical. The festival aim is to raise public awareness of the stone industry and our skills, and it seemed this was really achieved. People were out in their thousands to find out what we were up to. They took a genuine joy in watching us at work. It makes you appreciate how respected our skills are.

After 12 hours of carving, with only a short break for some delicious local fare, we were exhausted but the adrenaline was still running. Many of the contestants seemed happy with their progress. You could see the form of the different designs starting to appear. It was fascinating to see the wide variety of interpretations that the theme had inspired. 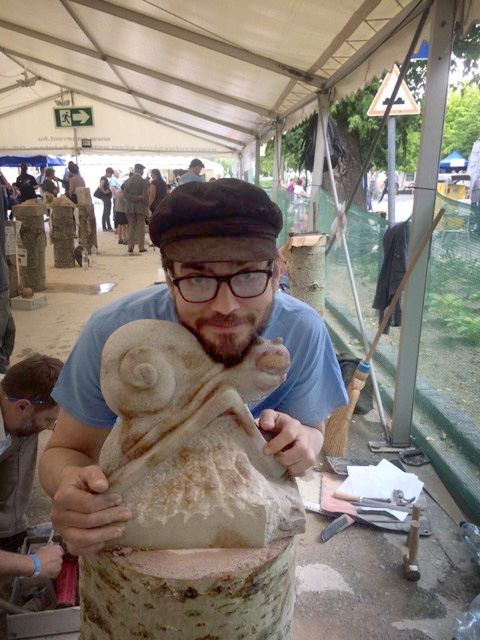 That evening we enjoyed great food, music and beer provided by the organisers. It was one of the highlights of the weekend. Away from the fever of the carving tent, this was an opportunity to relax and let our hair down, to catch up with old acquaintances and make new ones.

For stonemasons, who often work in isolation, it’s great to talk to other people as passionate about their work as you are, in a relaxed non-judgmental environment.

The following morning, after too little sleep and several coffees, we were feeling a little delicate but raring to go again.

With seven hours remaining, the pressure was relentless. Some people were pressed for time while others finished with time to spare. There was a good community spirit and those who finished early helped out the others, fetching food, water, cigarettes and lending tools as the intensity increased and the countdown approached. At 3pm we breathed a big sigh of relief and put down our tools. 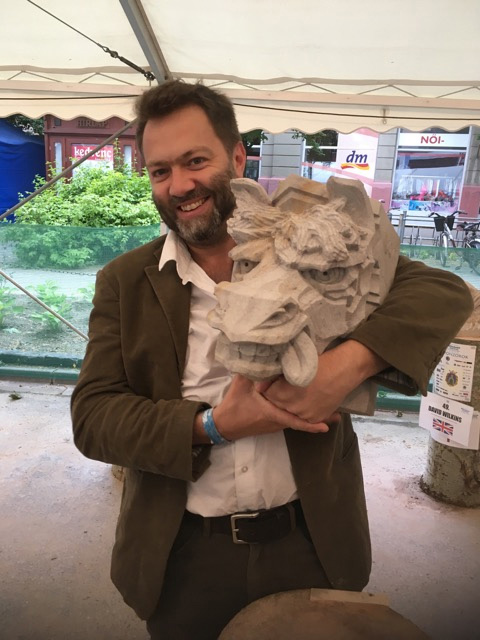 It is a competition but there is no prize money (although there are some very nice tools as prizes). The masons and carvers take part for the enjoyment of doing so and the kudos of winning.

This year the winners received trophies along with a selection of tools as a token of appreciation of their skills and effort. There were some highly creative and inventive designs and beautiful execution of work in the time required.

For me and the vast majority of us, it’s not about winning; it’s about taking part in the event and creating something to be proud of. Nevertheless, it was fantastic to see Great Britain bring home first and second prize.

It was no surprise to anyone to see Alex Wenham, a self-employed architectural stone carver from Oxford, on the podium again as he had won the competition in three of the previous four years. This time his carving of a horse’s head was beaten into second place by Mark McDonnell’s sheep.

Mark McDonnell is a technician from Moulton College. He took up stonework following his retirement after 30 years as a policeman. His interest in stonemasonry was fired by visiting the 2012 European Stone Festival when it was held in Lincoln, after which he enrolled on a course at Moulton College in Northamptonshire. Last year he participated in the European Stone Festival in Salzburg, Austria, and took honours in the apprenticeship class with his leaf boss.

Having completed his studies at Moulton he has stayed on to help out in the stonemasonry department as a technician and was competing in the European Stone Festival this year in the qualified mason category. His full-size maquette showed his thorough preparation. The simple yet strong design was very much in keeping with the theme. This and the speed and confidence with which he produced the beautiful, elegant finished piece made him a worthy winner. Third prize went to Guth Bence from Hungary (pictured top left). 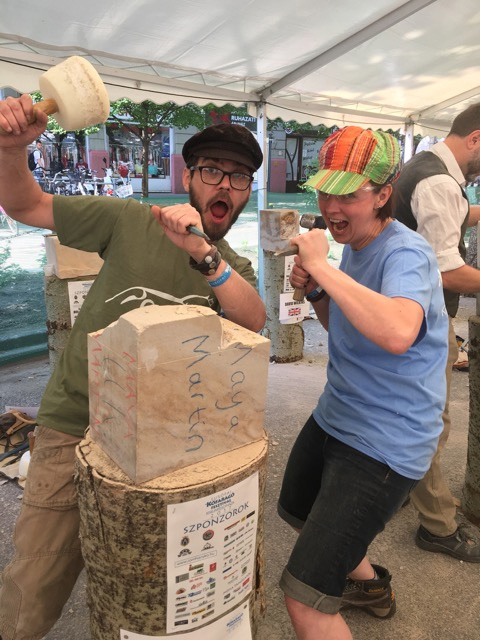 Most years the finished works are auctioned to raise money to help pay for the Festival and to raise money for the town or cathedral hosting the event. This year there was no auction because it was felt there was not enough wealth in the area to fetch respectable prices for the works. Instead, 30 pieces were chosen to be displayed at the town hall before being taken on tour around other towns in Hungary.

Kiskunfélegyháza was an idyllic setting for the Festival. The organisation couldn’t have been better from a participant’s perspective and all the local people were welcoming and helpful. From the moment we arrived we were taken under their wing. The weather was beautiful, the food was tasty and plentiful, the accommodation comfortable.

We returned home exhausted but buzzing and thinking about the theme for next year’s Festival, which will be held in the French city of Saverne. The theme is to be ‘The Invention of Romanesque Art in the Modern Period (17th to 19th Centuries)’.

This year, 18 stonemasons and apprentices travelled from England and Wales to the European Stone Festival, which I would thoroughly recommend to anyone in the industry. Whatever your level of experience there is so much you can get from just being there and working alongside such talented people from around the world.