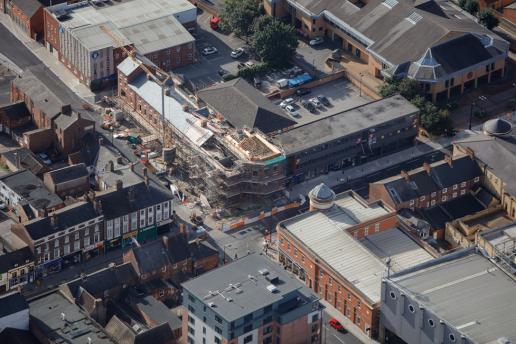 Rose House gets its new Cwt-y-Bugail slate roof from Welsh Slate after its 6m move.

A former music warehouse that had to be moved out of the way of a new link road in Lincoln and rebuilt brick by brick, now sports a new roof from Welsh Slate, part of the Lagan Group.

Rose House, on the corner of Lincoln High Street and Tentercroft Street, a Conservation Area, had to be moved 6m back to allow for the width of the new £22million east-west link road as part of the city centre's regeneration.

Main contractor Balfour Beatty was tasked by English Heritage with taking down the building, most recently Gadsby's shop, brick by brick and rebuilding it as four ground-floor retail units and 11 apartments on the three upper floors, using existing materials where possible.

But the Welsh slates, which had been on the roof since the former Rose Musical Warehouse was built in the 1860s, were replaced like-for-like with 650m2 of Welsh Slate's Cwt Y Bugail slates from the Blaenau Ffestiniog quarry in North Wales.

A team of up to six roofers at a time from sub-contractor Bracknell Roofing installed the slates on new open rafters. It took 12 weeks. The roofing included gables pointed with a slate undercloak and anchor points for solar panels.

Bracknell Roofing's Regional Contracts Director, Ian Bladon, who visited the site weekly, said: "Because the property could be viewed from the cathedral we had to use like-for-like, in this case Welsh Slate. It was a pretty straightforward contract for us. Bracknell also installed a fibreglass barrel roof, flat roof areas, leadwork canopies, chimneys and Velux windows.

The Rose Musical Warehouse was inherited by Edwin Samuel Rose, youngest son of founder William Rose. The business had stayed in the family for five generations until Jane Kinnear (nee Rose) and John Rose agreed to sell it to Lincolnshire County Council so the East West Link Road could go ahead, with its sections of dual carriageway and wider junctions.

An archaeological dig carried out on the site uncovered evidence of Roman remains and relics from the 1850s and 1860s with the coming of the railway and the urbanisation of this part of the city.