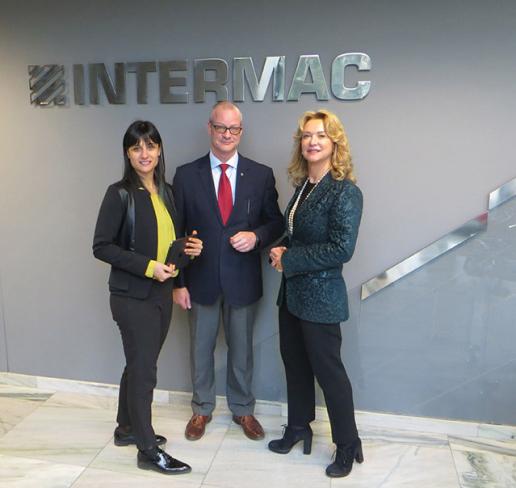 The UK premises of workcentre and waterjet company Intermac are being extended this year to accommodate the company’s expansion, part of which has come from co-operation with Donatoni bridge saws. But the company’s ambitions don’t stop there.

Intermac put the cat among the pigeons of stone machinery supply when it started selling the bridge saws of Donatoni. It has not bought Donatoni, but it is collaborating with its fellow Italian manufacturer on the sale of the saws, which is why the two companies had a joint stand at the Marmomacc exhibition in Verona last year – the largest stand at the show – and why they will exhibit together at the Natural Stone Show in London 25-27 April this year.

The collaboration was agreed just before Marmomacc 2015. By this year’s Marmomacc it had increased Donatoni’s turnover by 50% and made the company’s Jet the world’s best-selling five axes bridge saw, according to Biesse, the group to which Intermac belongs.

And it is not only Donatoni that has benefited. Having a bridge saw to sell alongside its Intermac Master CNC stone workcentres and Primus waterjets helped increase the Biesse Group’s sales by 21% in 2015 to €535million. Sales are expected to have grown another 20% in 2016.

Chris Arend from Intermac in the UK says that of all the machines sold by Biesse Group UK in 2016, 25% were Donatonis. And, he believes, at least half of the Intermac CNC workcentres sold to stone companies were as a result of also being able to offer the bridge saw. It has meant the stone side of Intermac’s business in the UK is now almost as large as the glass side, even though glass is a bigger industry.

And sales have remained strong since the referendum result to leave the European Union. “We had a record month in October,” says Chris, “despite the fall in the pound that was, in effect, a 15% price increase.”

He says there are always extra sales after exhibitions (at the end of September Intermac was at Marmomacc in Italy and at Glasstec in Germany) “but this year was exceptional”. In October alone there were, he says, 19 machines sold in the UK.

Because one bridge saw can feed two workcentres, every time Intermac lost a sale (because it could not offer a bridge saw prior to the Donatoni agreement), it had potentially lost the sale of three machines.

The arrangement with Donatoni has been such a success that it has helped spur Intermac on to further expansion… at its headquarters in Pesaro, Italy; at its premises in the UK at Daventry, Northamptonshire; and at sites across the world, including Dubai, Australia, America and Turkey. It also wants to further expand its product range.

Matteo Traini, Intermac Product Director in Pesaro, says: “For sure we are looking for new products.” And he wants those products to be integrated, working together seamlessly with minimum handling. In the Intermac factory in Pesaro there is a demonstration area showing the latest Master 33.3 being automatically loaded and unloaded by a robot arm in a continuous manufacturing process. It is working with glass, but it could just as easily be stone.

With the expansion has come a refocusing, with teams concentrating on the various market sectors so they understand the specific requirements of customers. Matteo Traini says Intermac wants to be a consultant to its customers.

The expansion in the UK sees more people being recruited to complement the 84 already employed. Chris Arend, who has been at Biesse Group since 2006, has taken over from Simon Manley, now retired, to be in charge of the Intermac stone and glass side of Biesse Group (UK) as its UK Business Manager. Alex Piccafuoco is Customer Services Manager, heading the customer interface. Steve Bulmer remains Chief Executive of the Biesse UK Group.

On the sales side, the people now dedicated solely to the stone industry include Jason Barratt, an ex-engineer, and Phil Breeze, who comes from the chemicals industry. Customer Liaison is fulfilled by Emma Dunn, who responds to telephone enquiries and generally supports the sales function in terms of customer relations management systems and data cleansing.

Intermac will have seven engineers in the field and three people on the telephones in Daventry to help customers.

New engineers and an apprentice are currently being recruited and will spend an extensive period with existing engineers in the field in the UK and in Italy getting to know and understand the machines before they start working on their own.

They will be installing new machines and handling maintenance and repairs if something does go wrong, although the onboard analytics mean that 50% of any problems that do arise can be quickly diagnosed and remedied remotely without the need for a visit by an Intermac engineer.

In fact, machine operators often do not even need to call Intermac because the final part of their training after a machine has been bought covers trouble-shooting. However, Intermac does like feedback from customers so it can design out any problems in the next generation of its machines.

The new series of Masters shown at Intermac this year, for example, have responded to customer comments by having control panels integrated into the machines and a new door configuration to take up less space. They also have lower tables for easier loading and unloading.

There will inevitably be a bit of disruption for the staff in Daventry while the extension there is built this year, but it is not something that will impact customers.

The work to the UK premises should be completed by the end of this year, adding 485m2 to the existing 900m2 showroom and test area (known as the technical centre) and an additional 340m2 of office space.

The extra space will mean there will be permanent displays of Intermacs and Donatonis that customers can see and operate when making purchasing decisions. Until now, the technical centre has been dominated by Biesse’s woodworking and special materials machinery.

The technical centre will be closed for most of this year while the work is carried out and will be officially re-opened with a bit of a fanfare in 2018. It is hoped it will host events for some of the bigger companies in the market. Indeed, some are already planned.

Chris Arend says the extra space has become essential because of the growth the company has seen. “When I joined in 2006 we were a company of 36 people with a turnover of £10million. There are now 84 people, rising to 87 in 2017. The turnover will exceed £34million for 2016. We have run out of room.”

The growth in the UK has been reflected worldwide by the Biesse Group, which is why the factory in Pesaro is also being expanded, adding more production lines. As Miranda Tomatis, Subsidiaries Sales Manager on the glass side in Pesaro, says: “Intermac, our customers understand, belongs to Biesse. It’s important to buy from a company that gives you stability. More and more companies prefer to do business with a company that has a strong shoulder.”

Diamut, Biesse’s diamond tool maker, will also be moving into a new factory, although close to its existing site in Lugo, Italy, because it needs to retain the expertise of the people who work there.

Diamut was bought by Biesse in 2007, although the two companies had been working closely together since 1987.

Alberto Bisio, the Diamut Product Manager who some will know from his time spent with Biesse UK, points out that Diamut is a small part of a big group, even though it believes it is the third largest diamond toolmaker for stone and glass processing in the world.

It is, nevertheless, an important part of the Biesse group, especially when customers want a tool specially made for them. Diamut gets requests from more than 1,000 customers a year, including stone firms, for tools of a special size or shape.

And as well as making tools, Diamut refurbishes them, giving an extended life to a tool that might cost €600 to replace for less than a tenth of that price, although that is less significant in stone, where a tool might last for years, than it is in glass, where it has done well to last six months.