UK and Irish businesses unaltered as Brachot-Hermant and Beltrami merge 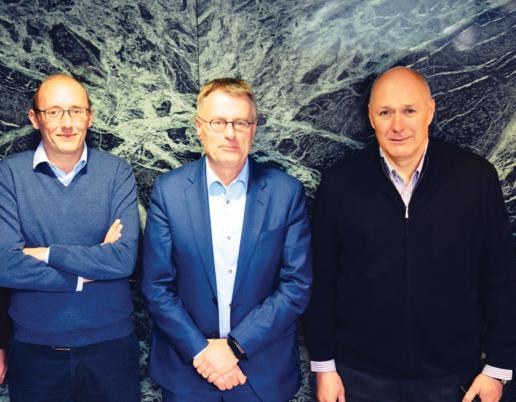 Belgian stone wholesalers Brachot-Hermant (with a depot in Erdington, Birmingham) and Beltrami (in Halesowen, West Midlands) have joined forces.

Both are family businesses. All the shares of Beltrami have been sold to Brachot. All the depots and employees of both companies are retained.

The combined companies include Stoneasy, the online direct importing business run by Bram Callewier, the only one of Beltrami owner Herwig Callewier’s seven children who is in the business with him, which was part of the reason behind the move. Herwig Callewier was succession planning to ensure all his children benefitted from the success he has made of his business.

For Gilles Van Overberghe , Managing Director of Brachot-Hermant, the move was about scaling up to allow for the continued investment in extraction and processing that the sector demands.

Brachot has 11 quarries (including the Kilkenny Irish Blue limestone quarries formerly owned by Feelystone and Stone Developments), six sawmills and 10 warehouses across Europe, Africa and India. Beltrami has depots in Belgium, France and England, although Beltrami’s online business of Stoneasy.com was also an attraction for Brachot.

In a statement to customers, Gilles Van Overberghe said: “We firmly believe that the products, services and staff of both companies complement each other to the effect that this will allow us to give you, our customer, a better and more complete supply.

“The companies Stoneasy.com, Brachot and Beltrami will remain in the market and are expected to supplement and strengthen each other in due course.

“We are pleased to announce that Herwig and Bram Callewier will stay, not only as a manager in Beltrami and Stoneasy, but furthermore as a member of the management committee at our company.

“We are convinced that this will allow us to form a stronger, more reliable and complete natural stone supplier, with a vested interest from the quarry to our customers.”

The addition of Beltrami, with 90 people and a turnover of €42million, makes Brachot-Hermant a group of 550 people with an annual turnover of €140million.

Bram Callewier told NSS that when his family was approached by Brachot their first reaction was negative. “But we are open people, always interested to listen to what people have to say. We had some very interesting conversations with Brachot.

“For my father it was an emotional decision but once we reached the click, we wanted to get this over. It was horrible not to be able to tell the people here. They aren’t afraid for their jobs but they were proud to work for Beltrami. I said to them they should see it as a compliment.”

Both Martin Dolby, who heads the Beltrami depot in Halesowen, and Paul Sambrook at the Brachot-Hermant depot in Birmingham, will continue to run their respective businesses, although the product ranges and prices will converge.

Bram says the two UK depots complement each other, with Beltrami strong in the Midlands and North and Brachot focused on London and the South.