Sealing & Cleaning: The Marble & Granite Centre teams up with DryTreat 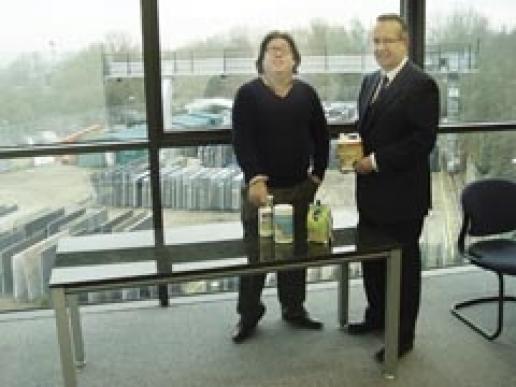 When The Marble & Granite Centre started trading in 1994 as a stone wholesaler, the industry was very different from today. Stone was a quality structural building product and a functional surface material and there were far fewer granites being used as worktops by householders.

The granites that were being used had a tight, regular crystaline structure – Balmoral Red and Impala/Bon Accord were hard wearing, took a polish well and lent themselves to uses such as flooring, cladding and work surfaces.

But the introduction of more decorative granites led to complications. Baltic Brown, for example, has a crystal structure that can result in minerals becoming detached when the slab is cut or polished, leaving small pits and microfissures.

At the same time as Stephen Pike was setting up The Marble & Granite Centre in Rickmansworth, Stuart Anderson was developing his DryTreat product in Australia. He invented it as a treatment for concrete – it was used to seal the Sydney opera house. It works just as effectively on other porous masonry, but 20 years ago it was not connected with stone.

The solution to the Baltic Brown problem was face-filling acrylic resin. Its use led to ever more decorative granites coming on to the market and a more discerning customer base. It changed the nature of stone use, from primarily functional to primarily decorative.

These days there are gneisses, schists, migmatites and conglomerates, as well as a huge range of more stones coming from an ever-increasing number of sources worldwide.

Some of the new stones seem as porous as England’s Jurassic limestones, judging by the speed at which they absorb liquids. It makes them susceptible to staining – and that means unhappy customers.

As many kitchen studio salespeople seem to find it difficult to advise customers on the nature of stone worksurfaces, it has been left to the stone processors to provide a solution, which is why it is now standard practice to seal stone and even engineered quartz worktops.

The initial type of fluorocarbon acrylic sealer used forms a layer that coats the surface of the stone. But it is only a coating and over a relatively short period it gets scratched and wears away, leaving the stone again vulnerable to staining and attack by acids such as citrus fruits and wine, for example.

Then came impregnators, designed to carry the sealer beneath the surface of the stone. These are a big improvement on the first generation of sealants but are still relatively short lived, requiring regular re-application.

DryTreat is a generation on from that, penetrating deeper into the stone and providing permanent protection – there is a 15-year guarantee on Stain-Proof, although the first applications of the formulation are now 20 years old and still performing to the original standard.

The DryTreat formula is a closely guarded secret, but the company says the molecules are 400 times smaller than those in other impregnating sealers, which allows them to penetrate deep into the microstructure of the stone. They do not block the pores, like sealers based on fluorocarbon, but form a chemical bond with them, making the stone water repellant without changing its appearance, slip resistance or ‘breathability’.

DryTreat has been imported to the UK for some time, but four years ago the company decided to establish its own business here, headed by David Coster, previously with Porcelanosa, the tile retailer. Having its own operation here has enabled it to offer technical support and back-up.

Until David started selling to the stone industry he had assumed it and the tile industry were much the same. “It wasn’t until I jumped over that I realised the knowledge I thought Iâ€ˆhad about stone was pretty much redundant,” he says. Which is why he is particularly happy to be working alongside Stephen Pike, with a provenance in the stone industry that goes back generations.