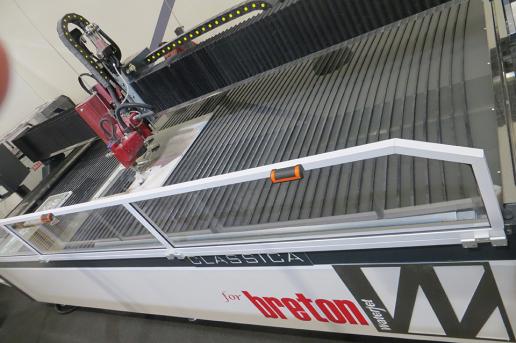 See Waterjet Corporation technology from Breton at the Natural Stone Show in London.

Breton is showing the new Genya five-axes monobloc cutting and milling centre, with its rotating head and suction system for moving pieces and optimising cuts. And it will have its Waterjet Classica on show, available in three and five axes versions for cutting natural stone, quartz, sintered stone and ceramics.

The waterjet is made by Waterjet Corporation, a fellow Italian company, which Breton entered into a co-operation agreement with in 2011, giving it exclusive rights for distribution of the machines that Waterjet Corporation has made for stone and metal cutting since 1991.

The machines are precise, powerful and fast (they can be equipped with a pump producing a pressure of up to 6200 bar). The novel 3D and 2D bevel cutting system uses an automatically positioned touch probe to maintain constant distance from the nozzle automatically, protecting the nozzle during angled cutting with ±69º interpolated tilt or with ITC technology.

The Edge 5 model system has five interpolated axes for taper control and 2D ±55º inclined cutting for mitres. A touch probe system allows accurate positioning of the Z axis and the ITC system is included in the package.