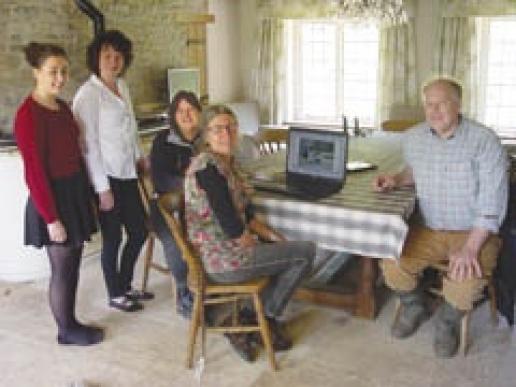 The Old Church at Clophill, Bedfordshire, that had become a centre of Satanism has had its reputation restored with a gentle VorTech clean.

What’s known as the old church in Clophill, Bedfordshire, has been a focus for devil worship to varying degrees since the 1960s. Having been abandoned after the new (Victorian) church was built, and then used as a mortuary chapel briefly in the 1950s, it is said that students dissected a cockerel there in the ’60s and the discovery of its remains led to speculation of devil worship in the local press. That duly attracted devil worshippers and escalated to the desecration of graves and the daubing of graffiti on the stone walls of the church that Satanists convinced themselves were the Gates of Hell.

It was certainly a hell of a job getting the graffiti off – although not as bad as it might have been, says Jamie Fairchild, Director of Restorative Techniques, the company that sells stone cleaning systems and products.

Restorative Techniques worked with English Heritage to find the best way of removing the graffiti from the walls after it had been decided in 2012 that the building should be cleaned up and, while left as a ruin, made safe for people to climb the tower and admire the landscape.

The church dates from about 1350. What made it easier to clean than it might have been was the organic growth that had colonised the stone before the graffiti was daubed on it.

The cleaning was carried out by Sean Brennan of masonry cleaning company SMB Restoration with Jamie Fairchild being asked to carry out tests for the removal of the graffiti and propose solutions. There were geometric patterns (consecration marks) underneath the graffiti. Sean discovered they had been given a colour wash when they were originally made, which excited the conservationists.

Various mechanical and chemical cleaning solutions were tested in inconspicuous areas of the walls and the system chosen for most of the work was Restorative Technique’s gentle abrasive cleaning system, Jos VorTech. It can be fine tuned by the operator, so the graffiti could be removed without damaging the substrate.

Restorative Techniques’ ThermaTech superheated water pressure cleaner was tested, but with the water at 150ºC it sterilises as it cleans. In many cases that is an advantage as it removes biological growth that is often unwanted. But at Clophill the biological growth had created a film over the stone that made cleaning the stonework easier than had been expected. Jamie: “It would have been difficult to predict that. It was the trials that made it apparent.”

After the walls had been cleaned, English Heritage specified the treatment of them with microcrystaline wax, which is an antigraffiti treatment from Restorative Techniques. It has minimal impact on the look of the stone and will protect the walls from graffiti attacks, and, importantly for historic fabric, is sacrificial and fully reversible. It does not seal the stone, so will allow biological growth to recolonise the stonework and once again create a natural film to make it easier to remove any future graffiti.

Restorative Techniques is critical of some anti-graffiti products on the market that form an impenetrable film over stone. They do alter the appearance of the stone, especially as they degrade over time, and because they prohibit the migration of moisture through stone and mortars they can accelerate decay. Some stone cleaning work involves removing antigraffiti treatments, which can be every bit as difficult as removing paint.

Because most of the graffiti at Clophill was paint, many people might have turned first to a paint softener. But that could have removed the 14th century colour wash over the consecration marks and in any case was shown to be unnecessary by the trials.

Restorative Techniques is often involved in finding the right solution for a cleaning job. When that involves the removal of paint or other applied material, the process frequently starts by analysing the material to determine if there are any toxic substances involved.

Old paint is often lead-based and even asbestos has now been found added to all kinds of building materials, including mortars. Cleaning off such materials might require ThermaVac, which is the optional vacuum recovery module that works with a standard ThermaTech. ThermaVac recovers waste, even at the top end hot temperatures, and automatically periodically discharges into a container (such as an intermediate bulk container or IBC) for subsequent safe disposal.

The constituents of materials also determine which are the best systems for removing it. Organically-bound acrylic and linseed oil-based paints are easily removed using the superheated water ThermaTech system or VorTech. But these mechanical systems do not work so well on

non-organically bound paints. “Just knowing what the coating is made of is half the battle,” says Jamie.

An issue with cleaning, especially historical stonework, is what constitutes clean. Often architects want a ‘conservation clean’ and are sometimes happy to leave the interpretation of that to the cleaning contractor. When Restorative Techniques is involved, Jamie is never happy with that. He would much rather provide a series of different levels of cleaning and have the architect choose which level is required and then the panels can be used as benchmarks to set the standard for the project.

Jamie: “Clients are becoming more… how shall I put it… Their expectations of how clean it should be are lowering. They want to retain a patina and look that’s commensurate with the age of the building. To achieve that they also want to use methods that have a lower ecological footprint – which is why our equipment is designed to last. It is made of materials that have a long life – we don’t use plastics or glass fibre. Our machines have been designed to conserve materials, which also keeps the price of them down.”

From the beginning, ThermaTech was designed to be versatile with options for different applications. The latest option to be introduced is a hose reel that fixes on to the machines but can be removed and will stand on its own. ThermaTech will also soon be available with its own integral compact diesel powered pump generator, that will power the system and also provide additional power for other items such as lighting.

The answer to what level of cleaning is required is not straightforward and can lead to a lot of debate. When it comes to the cleaning of cemetery memorials, Restorative Techniques recommends as a first point of reference Caring for Historic Graveyard and Cemetery Monuments, written and compiled by David Odgers and published by English Heritage in 2011.

Cleaning of memorials has been a growing business for Restorative Techniques, especially removing metal staining, particularly copper and iron. The company continues to develop more effective poultices for that work.

Another cleaning option is latex. It is applied as a liquid, allowed to cure then peeled off, bringing dirt with it. It is a good way of removing carbon deposits if there has been smoke damage from a fire, for example.

Latex can be applied by brushes, but it is a lot easier, quicker and requires less material to use an airless spray. The same is true of paint strippers. And the reason airless sprays are used is because a flow of air would cure the products too quickly.

Most stone cleaning involves historical structures but the methods are sometimes used on modern buildings and Restorative Techniques has specifically designed its machinery to be able to be taken on to scaffolding with adaptations for working more efficiently – such as making it possible to have two operators using a ThermaTech at full temperature but reduced pressure at the same a time.

Jamie: “We thought it would be something people would hire when they needed it, but people have bought them.”

All of Restorative Techniques’ machines can be hired from the company, but under strict controls and on a case-by-case basis. If it appears the company or the project are inappropriately suited, a request to hire will be politely declined.

By carefully managing the business, Restorative Techniques has grown 30-40% a year since the company was formed in 2009 by Jamie Fairchild and his wife, Julia. “Even right through the recession it hasn’t been quiet, especially in London. The Olympics helped – people wanted their buildings cleaned for the event,” says Jamie.

When they started, Jamie and Julia just had their son (also Jamie) working with them. Now there are 12 of them and the company has just doubled its storage capacity by taking on another 400m2 building.

With 60-80tonnes of abrasives and products normally held in stock, orders received even as late as 4pm can often be made up for delivery next day.

The company will deliver pallets of mixed materials and on products such as paint softeners has a sale or return policy for regular customers and those hiring the ThermaTech and VorTech machines, because often more than one paint softener will be required for a job where different paints have been used over time. Also, a contractor can never be quite sure how much of each material will be needed and does not want a job to come to a halt if he has not bought enough. On the other hand, he does not want to be saddled with full tins unused.

Sometimes customers want to carry out tests and require smaller amounts of materials. Restorative Techniques will repackage into smaller containers for a handling charge of £5. The company says that does not cover the cost of repackaging but it allows customers to calculate costings based on standard container prices.

“We try to be flexible,” says Julia. “We don’t want people feeling they can’t ring us to ask. We want people to be comfortable contacting us.”

Restorative Techniques got involved with UKTI to expand its customer base overseas – with some success so far in Hong Kong, Australia, Saudi Arabia and elsewhere.

But being so busy at home has left little time to concentrate on driving exports, which are typically more difficult because all kinds of visas and certificates are required, although UKTI has helped the company with that.

In fact, Restorative Techniques has been so busy it has not even had much time to pursue new business in the UK, let alone overseas. It has supplied some leading companies in conservation (DBR, Stonewest, PAYE, William Anelay) on major projects such as St Pauls, Westminster Hall, Royal Artillery, Trafalgar Square and Castle Drago. Many companies contact Restorative Techniques after seeing large / notable projects being directly specified for ThermaTech or Jos VorTech, such as Number One London, the popular name for Apsley House, one of the most interesting visitor attractions in the capital.

Julia and the two Jamies are continuing to achieve their growth forecasts for the company, actively expanding as well as widening their range of equipment and products. Two new recruits who have recently joined are Sue Bilney, who they have worked with in the past and takes responsibility for new business development, and Rory White, who assists with technical advice and product support to clients.

The first five years have undoubtedly been hard work at Restorative Techniques. But the hard work has paid off. Jamie: “What’s been particularly gratifying is the range, quantity and quality of the work we’ve been involved with.”