Stone Equipment International : From the top of the range to refurbs there’s even more to choose from 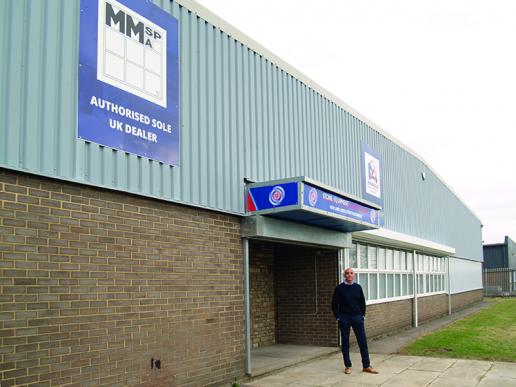 Having moved into new premises and taken on more staff,  Andy Bell of Stone Equipment International is ready to meet the changing needs of all sectors of the stone processing industry.

New premises with a lot more space and better facilities. A new customer care administrator in the office. A third engineer to refurbish used machinery. Water recycling and dust suppression systems from Dal Prete. They were all in place as Stone Equipment International (National Masonry) built its stand at ExCeL for the Natural Stone Show at the end of April / beginning of May.

Proprietor Andy Bell says this year’s developments are the culmination of the realisation a couple of years ago that a significant and increasing proportion of the UK stone industry is looking for the most sophisticated and productive machinery it can find these days. 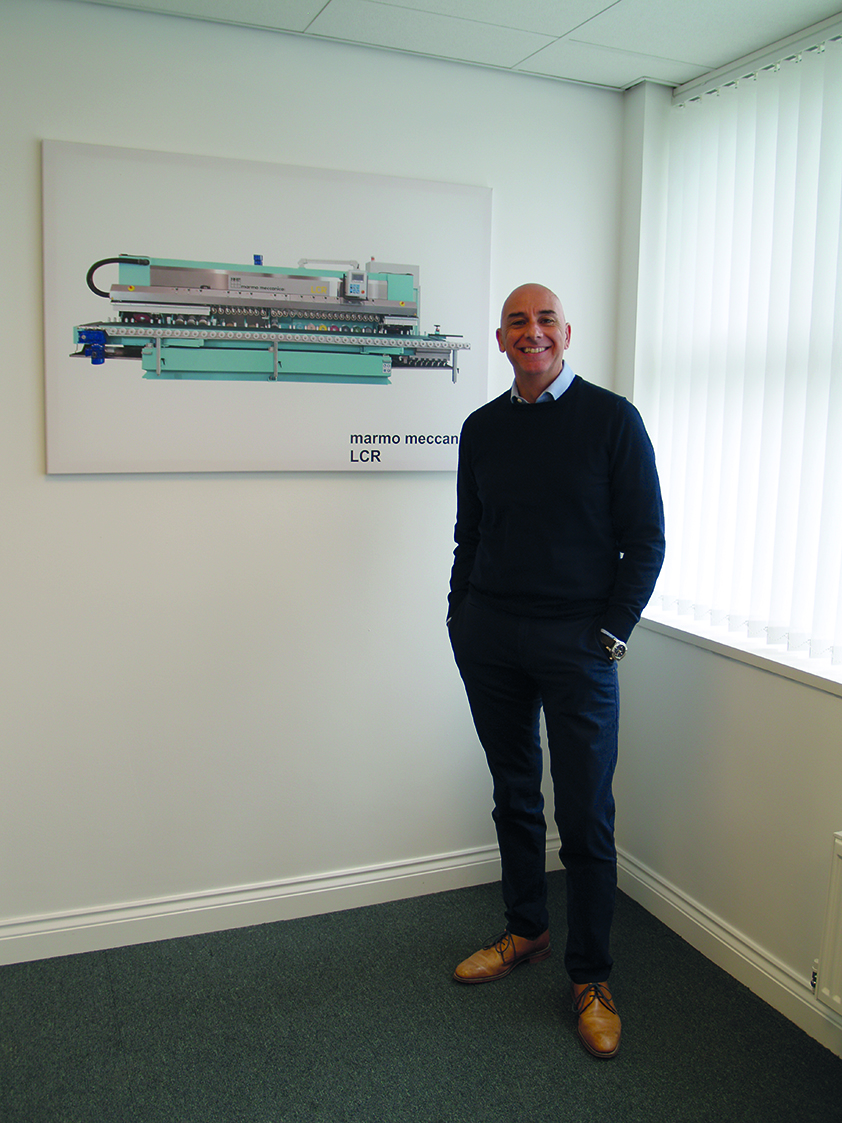 Andy Bell of Stone Equipment International in his new premises has everything in place to provide an even better service to the stone industry.

Stone Equipment International has UK exclusivity supplying Emmedue stoneworking saws and CNC workcentres, and MarmoMeccanica edge polishers. So he approached both companies and said he and his engineers (and Andy’s own background is in engineering) wanted training for installing and servicing the top-of-the-range machines from each company. Andy and his chief engineer, Paul Hamilton, then went to Italy for training with both of the companies Stone Equipment International represents.

A significant element of Stone Equipment International’s business is supplying refurbished machinery, which is why it has its own workshops and engineers. It is a part of the business that was its lifeline during the financial crisis following the credit crunch in 2007/08 when the stone industry was not buying much new machinery. 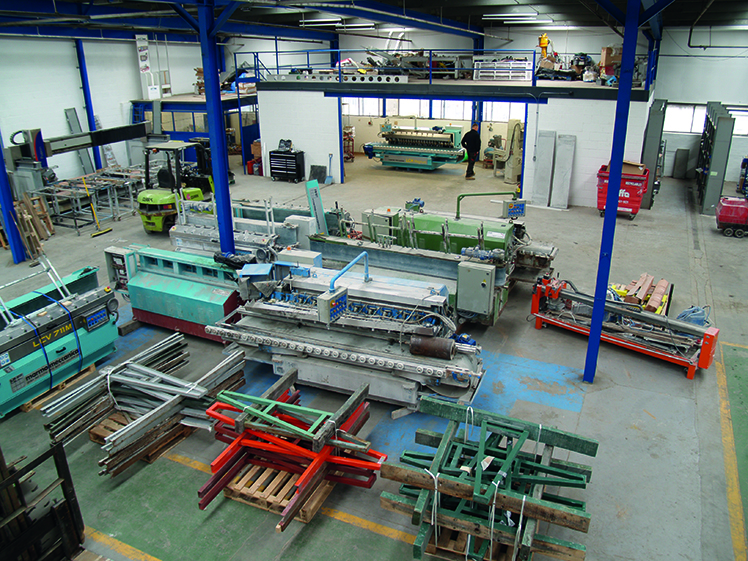 MarmoMeccanicas being refurbished in the company’s new workshop.

The company gained a reputation (which it retains) of giving exceptionally good deals on new machinery bought in part exchange for existing machines because Andy was prepared to accept that he got for the second-hand machines was all the profit he required from the deal because he was confident in his ability to sell the used machines quickly and at a good price.

The ‘International’ in the company’s name is there because it does not rely on the UK and Irish markets for the sale of those machines, but has established international contacts to be able to supply them to whatever part of the world the customer is in.

Although an increasing number of stone processors in the UK are looking for the latest, most sophisticated and productivity enhancing CNC machinery, there is still plenty of demand for refurbished machinery. So much, in fact, that Andy decided he needed more space and a third engineer to cope with the burgeoning work, hence the move to the new 1,250m2 workshop and offices in St Helen Auckland in County Durham, not too far from his previous premises.

The third engineer recruited is Cresswell Watson. He had been working for a company supplying parts to the car industry but had already resigned and was planning to move elsewhere when Andy, who has known him for many years, mentioned Stone Equipment International needed a new engineer. It is interesting and varied work and Cresswell offered his services, which were accepted and he is now working alongside Chief Engineer Paul Hamilton and Ryan Dwyer, who served his apprenticeship with Stone Equipment International, completing a college course  and now having qualified. 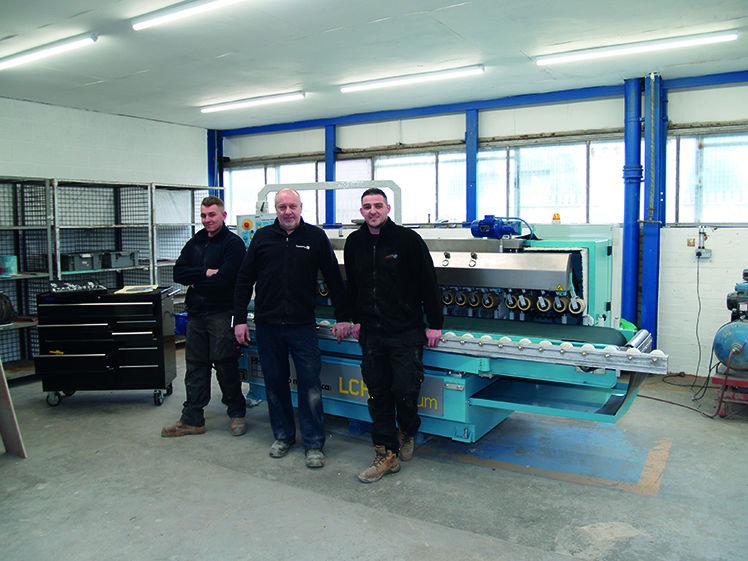 Paul Hamilton says that going to Italy to learn about the more sophisticated CNC machinery last year was not unusual because he goes to Emmedue and MarmoMeccanica eight or 10 times a year, either with customers or to learn some new piece of hardware or software that has been added to the machines. And because Stone Equipment International has its own engineers, it gives two years parts and labour warranties on all the machines it sells.

With customers in the stone industry becoming more sophisticated, Andy thought his response to them should be stepped up a gear as well, so he advertised for a Customer Services Administrator. The position has been filled by Jane Odwyer, who had the same role previously with a supermarket chain.

She works alongside the administrative staff and it is her responsibility to be in the front line to respond to all customer contacts with the company and ensure they are dealt with promptly and appropriately. There is always one of the engineers in the workshop who will often be able to help customers sort out any problems on the phone or by taking remote control of the machine via the internet to diagnose the problem. If it cannot be resolved that way and a spare part is needed, an engineer would normally be with the customer in 24-48 hours. It is one of the benefits of refurbishing machines that the workshop stocks a full range of spare parts.

Jane is not simply waiting for customers to contact her, however. She is proactively approaching them. “I’m trying to drive the role – calling customers when it is time for their machines to be serviced and making sure any problems they might have had have been dealt with and they are happy with the results. So far they have all been grateful to have been contacted.” 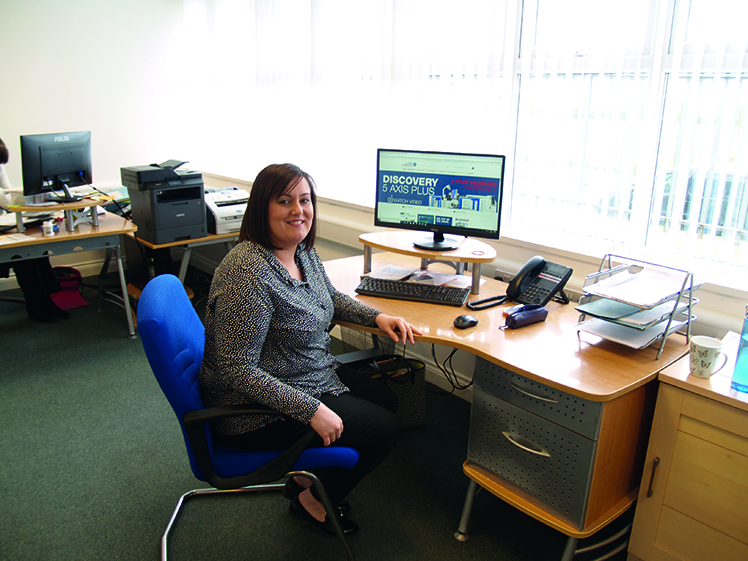 Jane Odwyer has been recruited for customer services. She is now customers’ first point of contact with Stone Equipment International.

Andy says the decision to go to Italy to find out about the top-of-the range machinery had been an eye opener for him, especially on the MarmoMeccanica edge polishers. “We learnt how far ahead of the game Marmo are, technically and design-wise. We didn’t really appreciate that before. The LCR can round and polish the top and bottom edges with pencil rounds, or chamfer them at 45º, as fast as a flat edge and with a better finish than torus polishers, even on difficult materials. We believe it to be the fastest in the world. And the fact it can smooth the underside of a worktop lip has been a phenomenal seller.”

When customers add to or upgrade their machinery they often take the opportunity to install new dust suppression and water recycling systems as well, so now Stone Equipment International is also supplying the Italian Dal Prete plant for that, which even produces purified recycled water for CNC spindles.

The result of all the changes can be summed up in an 18% increase in sales last year compared with the year before, which is especially impressive in a year full of Brexit uncertainty.

Now Stone Equipment International is working its way through the enquiries it has to follow up from the Natural Stone Show in London – and Andy is feeling confident this will be another bumper year.