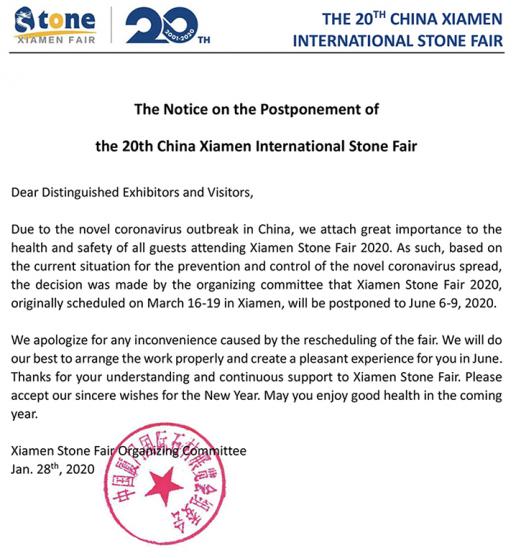 The announcement by Xiamen Stone Fair that the event has been postponed to 6-9 June because of the Wuhan coronavirus.

The Xiamen stone show in China, the largest of the world's stone exhibitions, has been postponed until June in response to the Wuhan coronavirus outbreak.

The show was to be staged 16-19 March. It has now been rescheduled for 6-9 June, by which time the epidemic will hopefully be over.

Xiamen Stone Fair is now one of the world's major international stone fairs. Its importance has grown on the back of the growth of China's trade in stone, with much of it shipped from Xiamen, where the country says 500,000 people work in the stone industry.

China' s total total trade in stone amounted to US$9.61billion in 2017, with 49million tonnes of stone being imported and exported. The imports reached 14.65million tonnes valued at US$2.79billion,  up 23.21% on the year by volume and 26.78% by value. No doubt the tariffs imposed by America have hit trade with the USA, but that just makes China even more keen to trade with the rest of the world.

China accounts for 25-30% of the world's trade in stone. Natural stones are imported from all over the world, mainly Turkey, India, Italy, Brazil, Iran, Egypt, Spain, Greece, Portugal, Norway, Palestine, Saudi Arabia, Finland and South Africa. The main export destinations of natural stone materials are Germany, UAE, Netherlands, Belgium, UK, Japan, India, Korea, Vietnam and the USA, which is likely to remain an important market in spite of the tarrifs.

Complete stone production, from raw material to finished product, is established and well-developed. Many of the top stone enterprises in China have built their processing base in Xiamen and continue to explore new markets worldwide. The Xiamen stone exhibition is their main shop window.