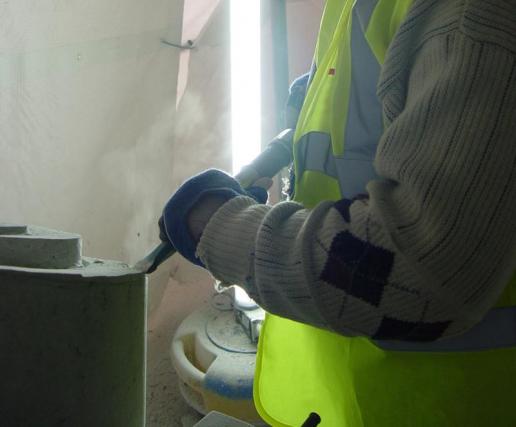 Pictured above is a mason using a pneumatic chisel. All power tools pose a potential vibration risk to the user and companies that ignore the risk are facing severe penalties when prosecuted as well as leaving themselves vulnerable to compensation claims and subsequent rises in insurance premiums.

Luton Magistrates’ Court heard the case on 3 September. Dacorum Borough Council had reported seven cases of HAVS between May 2015 and June 2016. The affected employees were all part of its grounds maintenance and street care team, looking after public spaces in Hertfordshire.

An investigation by the Health & Safety Executive (HSE) found that the council had neither adequately planned its working methods nor informed employees about the risks to their health nor trained them how to use tools safely and without becoming exposed to vibration injuries. The Council did not limit the duration or magnitude of exposure to vibration in any way and failed to put in place suitable health surveillance to identify problems at an early stage.

Speaking after the hearing, HSE inspector Rubeena Surnam said: “This was a case of the council failing to identify the risk from hand arm vibration, which is a recognised health risk with potentially disabling consequences.

“Unless vibration is identified and properly assessed, an employer won’t know the level of risk and whether action is needed to protect workers.”

HSE can help you calculate the risks of HAVS in your business with its hand arm vibration calculator and it offers HAVS training days at its training centre in Derbyshire... read more