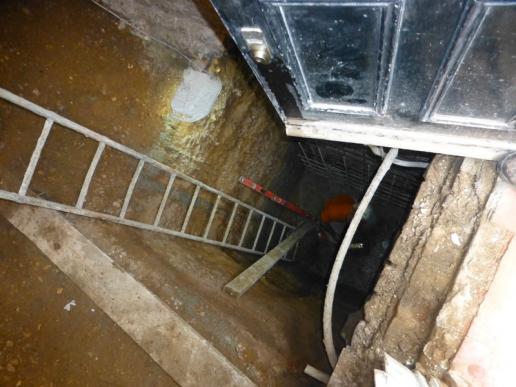 A scene that confronted an HSE Inspector at one site. There is a man working at the bottom of this hole with unsupported walls. You can read the story here.

A company has been fined £2.6million with £54,000 costs after an employee was killed when the trench he was working in collapsed on him.

James Sim, 32, from Barry, South Wales, was working as a sub-contractor on behalf of Balfour Beatty Utility Solutions Ltd on 14 April 2010 in Lincolnshire. He was working in a trench laying ducting for new cable for an offshore windfarm that was being built off the coast by Heysham, Lancashire. The trench was dug to a depth of 2.4m. It had no shoring. James was killed when he became trapped in the trench after it collapsed on him.

Balfour Beatty Utility Solutions Ltd pleaded guilty at Preston Crown Court on 6 May after an investigation by the Health & Safety Executive (HSE).

The Court heard that Balfour Beatty failed to assess the risks associated with the works  adequately or control the way in which the excavation took place.

HSE inspector Chris Hatton said after the hearing: “The level of this fine should serve as a warning to industry not to ignore health & safety matters.

“Balfour Beatty failed to adequately assess, plan and supervise the work being undertaken. Trench collapses are easy to prevent and it is disappointing that James’ life was lost in such a tragic way.

“The family has shown great patience and support throughout this investigation, which is a credit to both them and James’ memory.”

More information about structural stability during excavations can be found at: http://www.hse.gov.uk/construction/safetytopics/excavations.htm