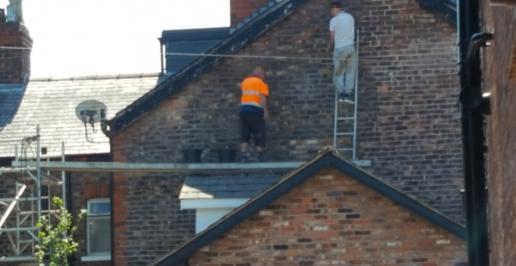 Uninsured employees working six metres off the ground without any safety measures and exposed to respirable silica dust because their employer wanted to save money.

A Salford building contractor has been sentenced after exposing workers to the dangers of falls from height and exposure to silica dust.

Manchester Magistrates’ Court heard on 26 March how, while carrying out repointing work at a house in Altrincham in Greater Manchester in July last year, Kenneth Morris allowed his employees to work on unguarded platforms six metres off the ground. The workers were also not provided with adequate protection from silica dust during the removal of cement-based mortar.

The Health & Safety Executive (HSE) began investigating after receiving information from members of the public. During the investigation, it was found that Kenneth Morris had made a deliberate decision not to provide the correct scaffolding or means of dust capture in order to save money. He had also failed to insure his employees against any injury or ill health they might have sustained during the course of their work.

Kenneth Morris, trading as K & M Pointing of Basten Close, Salford, pleaded guilty to breaches of Section 3 (1) And Section 2 (1) of the Health & Safety at Work etc Act 1974 and Section 1 (1) of the Employers Liability (Compulsory Insurance) Act 1969. He was sentenced to a 26-week prison sentence suspended for two years, 180 hours community service and ordered to pay £2,000 in costs.

After the hearing, HSE inspector Matt Greenly said: “HSE receives thousands of concerns from members of the public each year and we investigate those which show serious risk. Corners must not be cut when dealing with employees’ safety, such as working at height.”