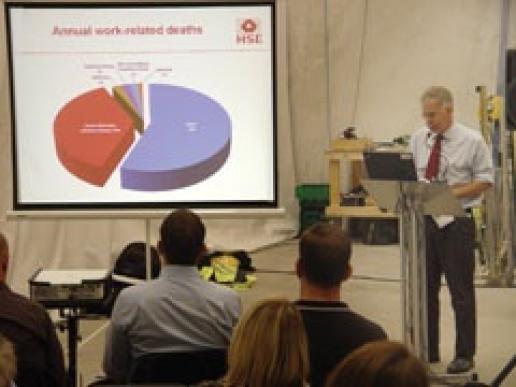 The Health & Safety Executive want to improve conditions in masonry workshops. In a two-pronged initiative they are holding awareness days in workshops around the country and are targeting stone companies for visits by inspectors this autumn.

You might be breathing a sigh of relief at the government’s promise to end Labour’s health & safety culture. But before you start celebrating the publication of Lord Young’s review, you should note his comment that “…all the rules and regulations relating to construction, manufacturing, chemicals and nuclear industries, even farming, are untouched”.

Margaret Thatcher’s former Trade Secretary says: “We have one of the best records in Europe for accidents and deaths in the workplace and nothing in my report will change that.”

So it’s business as usual on health & safety in the stone industry and the Health & Safety Executive have said explicitly that they will be visiting stone companies in the final quarter of this year – ie now.

They will, they say, be looking at the usual issues relating to the stone industry – dust, HAVS and manual handling. They will also be taking an interest in machinery guarding.

HSE Inspector Roy Bush, who has responsibility for the stone sector, says the stone industry is a strange case regarding machinery because while CNC workcentres are normally entirely enclosed, bridge saws and croppers are often left exposed and are operated with people in close proximity to them – certainly close enough to be injured – which contravenes the Provision & Use of Work Equipment Regulations 1998 (PUWER).

Roy says: “I have never come across a serious injury relating to a bridge saw but clearly they don’t comply with PUWER if they don’t have a guard. You see them with the control panel right next to the blade. Someone could trip and fall into the blade – and a 900mm disc has a reasonable run-down time.”

He says bridge saws should be enclosed and have gates with delayed locks that allow for run-down time before they will open.

Dust is a perennial issue in stonemasonry. Just about all stone has some measure of crystalline silica in it and crystalline silica is like asbestos – it can cause lung cancer. But because cancer takes years to develop, it is often discounted in the same way as smokers discount the fact that 50% of them will die prematurely as a result of their addiction.

By the way, if you smoke as well as breathe respirable crystalline silica (RCS) dust, you are five times more likely to end up with chronic obstructive pulmonary disease or silicosis than if you don’t.

“For the past 10 years or so HSE have recognised that there’s more danger to stonemasons from dust than from accidents,” says Roy. In the country as a whole, 800-1,000 deaths a year are associated with exposure to RCS and masons are exposed to more of it than most people.

Of course, it is much more dramatic when someone is crushed by a falling slab of stone. The result is immediate and tends to make an impression. Changes are made to materials handling procedures to avoid a repeat of the accident. And materials handling, especially the use of ‘A’ frames, is another area that the HSE is concentrating on when it visits masonry workshops.

There have been six fatalities in recent years as a result of slabs falling from ‘A’ frames, not to mention some serious and numerous minor crush injuries, and HSE strongly recommend masons to avoid ‘A’ frames that have not been modified to make it impossible for stone to topple forward. They would much rather see companies storing stone on toast rack style frames.

Lifting stone using caiman style slab grabs, scissor and vacuum lifts has improved materials handling a lot over the years and moving stone around a workshop is far more likely to be mechanised these days using pillar cranes, gantries and properly adapted fork lifts, but it is still an area HSE are looking at.

Vibration injuries are another area of concern to HSE. Masons tend to consider White Finger an occupational hazard but HSE believe it is avoidable.

They say the very least companies should be doing is checking for the condition in masons using tools such as spinners and pneumatic hammers. At the first signs of vibration injuries the masons should be taken off the tools and given alternative work. If they are not, the condition will get worse and it can be highly debilitating.

While these are the main problems HSE inspectors will be looking for during their unannounced visits to stone companies this autumn, they are also working with Stone Federation Great Britain to try to help masons avoid falling foul of health & safety regulations.

The Federation has published the first two documents so far in their StoneSafe campaign, covering risk assessment reviews of hazardous substances and hand arm vibration.

The guides aim to be of practical assistance by, for example, including vibration figures for some tools, forms to complete for Coshh assessments, tool box talks to involve employees, where to download the HSE vibration exposure calculator (www.hse.gov.uk/vibration/hav/hav.xls) and the like. These documents are only available to Federation members.

The Federation has also been working with HSE to stage Safety & Health Awareness Days – SHADs. The latest was last month (September) at the Park Royal workshops of Rafi Mimoni’s Mega Marble in London. It was attended by about 30 people. Other Stone Federation members have offered to host SHADs in their workshops and more are planned in the coming months for Wales and the South West, the Midlands and Scotland.

Although they are called ‘days’ they only last half a day (about five hours) although a lot of ground is covered in that time.

In London, Taran Hewitt spoke about materials handling and said all the most serious accidents involving ‘A’ frames, including those that had resulted in deaths when slabs fell on people, had occurred because there was nothing physically to stop the slabs falling forward. “They need to be restrained in the factory and especially on a vehicle,” he said.

He suggested an ‘A’ frame and toast rack combination, with steel restraints in front of the slabs on ‘A’ frames. “People will say you have to lift the slabs much higher to get them over the uprights. Well, yes, you will have to. But anything left on the ‘A’ frame won’t fall over.”

He said even with restraints, people should not stand in the fall zone in front of slabs but to the side.

Tim Ward, a specialist HSE Inspector in noise and vibration, said: “Any vibration going into the hand-arm system is a source of ill health.” For masons, polishers and grinders are common sources of vibration.

He said if spinning tools were being used for more than about an hour a day, or percussion tools for more than 15 minutes a day, action probably needed to be taken to monitor the effects.

He said firms should choose low vibration tools – and manufacturers are obliged to provide vibration figures – that are well maintained and used by people who have been trained to use them.

Anti-vibration gloves are not effective at reducing the frequency of vibrations that cause harm, he said, and most of the devices introduced to measure exposure to vibration by people using power tools are nothing more than expensive timing devices. A stopwatch would be as effective.

Martin Gibson spoke about the problems of silica dust. He said that RCS levels should be reduced to about 100mg/m3 of air by dust extraction systems and then operators provided with P3 or FFP3 masks.

Martin said booths with an air flow of 1m per second through them were best for containing and removing dust. He said water walls could work well if they were used properly with the dust created being directed towards them.

With all dust extraction systems filters had to be kept clean and the system checked for effectiveness every 14 months.