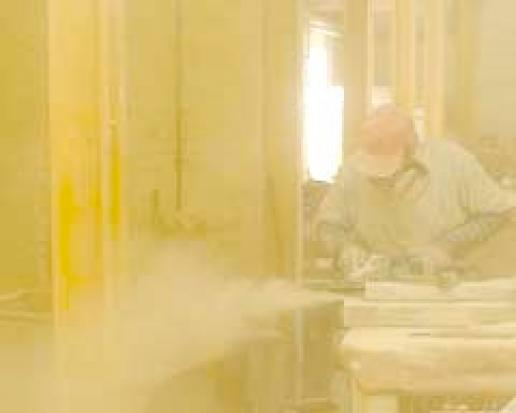 It's better with a vacuum extractor on the grinder but it can still exceed the legal limit of RCS exposure and you need a mask when working high silica content products such as granite, engineered quartz and sandstone, finds the HSE.

A report by the Health & Safety Executive (HSE) has called into question the effectiveness of the dust extraction systems of power tools.

RCS is now classed as a carcinogen coming under the Control of Substances Hazardous to Health (COSHH) regulations. The Workplace Exposure Limit (WEL) for RCS is 0.1mg/m3 during an eight hour working day.

The report was authored by HSE scientists Dominic Pocock, John Saunders and Adam Clarke. You can see it at bit.ly/2OO1r4H. It was directed by tool maker Hilti as part of its ongoing dust awareness campaign, further information on which can be found at http://hilti.to/health-safety-dust-series.