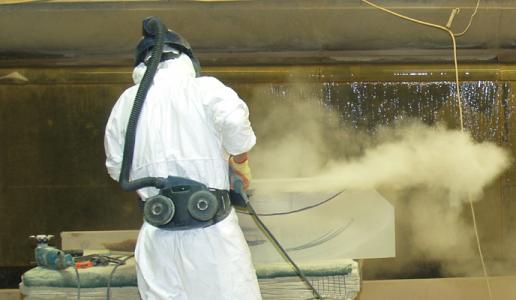 Most companies producing sandstone masonry in the UK understand the risk from silica dust and take appropriate precautions. The same is not always true in the worktop market, especially outside the factory environment when fixing.

Throughout October the Health & Safety Executive (HSE) once again targeted construction sites with an inspection initiative focussing in particular on measures in place to protect workers from occupational lung diseases caused by carrying out common construction tasks.

All natural stone and engineered quartz contains some level of silica. Engineered quartz, granite, sandstone and slate have particularly high levels of it while limestone has very little.

Stone Federation took the opportunity when mentioning the October clampdown to remind its members about its dedicated health & safety website at stonefed-safety.co.uk, where there is a section about the dangers of silica dust and how to combat them.

The HSE also has sections dealing with dust on its website (hse.gov.uk), including an area devoted to stonemasonry, which is a sector it monitors because it considers it high risk.

HSE said it was focussing on dust because priority is often given to safety on building sites, which is certainly important, but thousands more people suffer ill-health at work than are harmed in accidents.

Dust can be a slow killer. HSE estimates there are some 8,000 work-related cancer deaths a year as a result of it, with the construction industry accounting for around 3,500 of them. Asbestos and silica are the main causes.

The HSE inspection initiative in October was intended to help construction company owners, managers and workers to be aware of how hazardous such substances can be.

HSE Inspectors wanted to ensure those involved with construction projects know the risks, properly plan their work and use the right controls. Where poor standards were found, enforcement action was being taken.

Meanwhile, a report by doctors in America has once again highlighted the danger of silica dust from working engineered quartz.

The makers of quartz like to boast about the level of natural quartz (which is a form of silica) in their products, usually stating it is well over 90%.

Cecile Rose, MD, MPH, professor of medicine at National Jewish Health, who co-authored the American study, said: “We believe there may be hundreds, if not thousands of cases of silicosis among workers in the engineered stone industry.”

Once contracted, silicosis cannot be cured. It is progressive in the same way as asbestosis and the asbestos cancer mesothelioma are, accumulating in the lungs and worsening with continued exposure.

It was as a result of a rise in silicosis cases among her patients that Dr Rose decided to review patient files and discovered seven recent cases of silicosis among engineered stone workers in her Colorado practice alone.

Public health officials in California, Washington and Texas identified 11 more cases through surveillance programmes. Two of the California cases had resulted in the deaths of the sufferers, who both worked at the same stone fabrication factory.

Several of the patients with silicosis were found also to be suffering from autoimmune diseases such as rheumatoid arthritis and scleroderma. Two had latent tuberculosis infections.

Australia has also raised the alarm over the processing of quartz. Screening workers in the stone fabrication industry there has shown as many as 12% have developed silicosis.

The American stone fabrication industry is estimated to employ 96,000 people in 8,700 mostly small fabrication plants. Comparable rates of silicosis would mean 11,500 workers in the industry could have it.

In the UK there are estimated to be about 1,100 worktop fabrication factories. If they each employ eight people and the incidence rate is the same (12%), about 1,000 of them would be expected to be suffering from silicosis.

In Australia the leading cancer charity, Cancer Council Australia, is working with the international body for workplace health and safety professionals, the Institution of Occupational Safety & Health (IOSH), to raise awareness of the risks of silica.

One outcome is that the Cancer Council has published new online advice on its website. If you want to take a look it is at bit.ly/silicaau.