Video: Silicosis first hand. Stoneworker Terry talks about the disease he has contracted 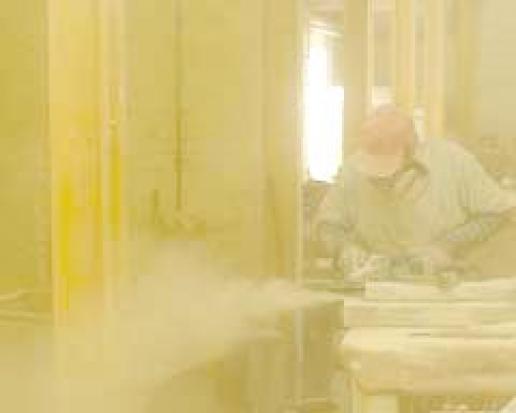 Dust can be a killer.

HSE (Health & Safety Executive) has posted a video of Dr David Fishwick interviewing Terry, a former stoneworker suffering from silicosis after being exposed to respirable crystalline silica (RCS) at work. Click here to watch it or see below.

Terry worked for more than 30 years with different types of stone. He has worked with marble and in recent years with sandstone that contained 90% crystalline silica.

Silicosis is a serious respiratory condition that will almost certainly shorten his life.

Terry is in the early stages of the disease. Another stone worker, Lee, was 36-years-old when he had a lung transplant as a result of silicosis. Lee was told a lung transplant sometimes gives people another 10 years of life. Lee didn't get that long. He is now dead.

This is what Lee told Natural Stone Specialist about the disease after his lung transplant:

Silicosis has wrecked my life. By the time they discovered I had it it was too late. I had started coughing. I sweated at night. I got out of breath just walking across to the office. I was still working. I loved the job. It had got to the point where the dust didn’t bother me.

First of all the doctors thought I had tuberculosis, then they thought it was sarcoidosis and gave me steroids, but that didn’t work. I went for an operation and they took a bit of my lung out, which was bad enough.

I got a letter about a month later saying you had better come and see us. They said they had sent a sample of my lung to London for analysis and I had silicosis.

I went in and told the boss. He was upset. I said: sorry, I’m going to have pack up work.

Within three months I couldn’t breathe without oxygen. I was there on the bed. My wife had to stay at home to look after us.

I had been working six days a week, lifting stone all the time, so I was fit. But I went from a healthy, fit, muscly person to nothing. When I tried to stand I would fall over. I was white. I looked as if I was dying. Every part of your body hurts. You feel like your body’s shutting down. I was screaming for the wife to help me – shouting for help. I would hate to think of someone else like that.

The doctor had said I had two weeks left to live when a lung became available from Ireland. I had been in hospital for three weeks by then. I’m grateful for it. I think: phew, I was lucky. I was only just over seven stone when I had the operation.

They don’t give you both lungs because there aren’t enough doners. They give one lung each to two people who need them. One of my lungs was shrivelled up and hard. The right lung. That’s the one they replaced.

What I went through I wouldn’t want anyone to go through. The operation was devastating. The surgeon told me afterwards a lung can only go seven hours without a blood supply and they got the new lung into me with only 20 minutes to go. They were running out of time.

Afterwards it’s all the drugs they put into you… the hallucinations, the pain, you can’t walk, you don’t know who you are. They put a trachea in my throat… you can’t speak. I thought they were trying to kill me.

The first month after the operation was difficult. It took a long time to recover. I had to see a psychiatrist for six months to get my head round it because of the drugs, but I’ve picked up in the past six months. It’s been more than a year since the operation now. I can breathe without oxygen, but I can’t push myself, only having one lung.

I can get up in the morning, go down stairs, get to the car and go to the shops, but if I try to move fast I get out of breath. I’ve still got a nasty cough and every time I cough it still hurts. I still feel ill, but not as ill as I was.

It was sandstone I was working. I was doing shot blasting before that, but you wear all the proper gear and the dust can’t even get to you. Then I moved on to the stone. I worked between eight and 14 hours a day. I never took holidays. I sort of wish I had.

I was making cills, doing lettering, basically anything that needed working. I was skilled and there’s not many of us about. That’s why I got the work.

I wore a mask, but you need a proper mask. You would take it off for a breather and the dust was still in the air. I was taking it home with me on my clothes. The car was full of it. It was there all the time. It was at home. My wife and two children had to have a check as well, but they are all right.

I went to the boss and said there’s something wrong with me and then I went to see the doctor. They thought I was too young to have silicosis, because the only time they had seen it was when people have retired.

My boss didn’t know he was supposed to report it. He was sorry it happened. He still comes to see me. It must be hard on him. It’s not like he’s personally to blame. I wouldn’t say anything against him.

We are suing the company for compensation. I thought it would be clear cut because of the Health & Safety Executive being involved, but it’s not. And I’ve still got all the bills to pay. Everything’s just as before.

I want to pay off the mortgage and spend some time with the family. I want to know it’s sorted. There’s nothing worse than scraping together enough to try to pay the bills when I know I’m owed something here.

It’s no good to think in terms of 10 years to get it settled. They have estimated I will only live another three or four years, although some people go 10 to 12 years with a new lung.

I wish now I hadn’t done the job – but I loved doing it. When I stopped I missed it. I liked working with the lads and everything. I thought: what am I going to do now? Sit in the house?

I hope talking about this will make companies and other masons realise that there is a danger and that they must sort it out from day one. I was well paid and you think you’ll work as much as you can to make good money. But that’s not much good to me now.