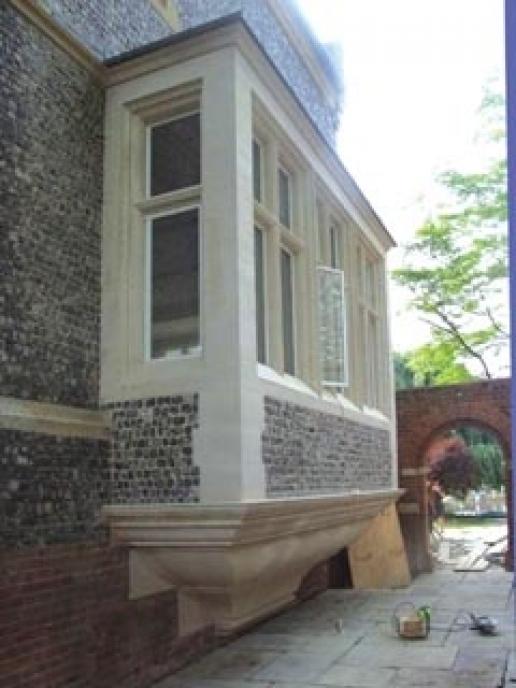 The picture here shows some of the Hartham Park Bath stone and knapped flint work of AF Jones Stonesmasons of Reading, Berkshire, on the privately owned Old Bridge House next to the Thames in Marlow. The main contractors were TBM and the architects Spratley Studios.

This emphasises that conserving the built heritage of the country does not mean simply preserving it, unaltered. Historical buildings can be altered sympathetically for modern use. It is, after all, often the alterations that have taken place over the years that give buildings much of their character.

The character of this large Victorian house has been enhanced by the work of the 21st century stonemasons, restoring and replacing Bath stone windows, including the new Bath stone oriole window and extension pictured, and carrying out repair and maintenance.

The house has solid wall construction with finely knapped flint of 50 x 150 x 50mm. Angus Jones, who heads AF Jones Stonemasons decries a lot of today’s flintwork but says Old Bridge House has some of the best he has seen – and the same quality was reproduced on the new work.

Because you can spend a long time producing such fine knapping, they re-used as much of the original flint as possible. Nevertheless, they did buy some new from CED, but it was supplied simply split in half and a lot of work was involved in knapping it to the required size and shape.

Lime mortar has been used throughout and to finish off, the faces of the flint were brought back to pristine condition with a rub of linseed oil.