Around the regions : Wales 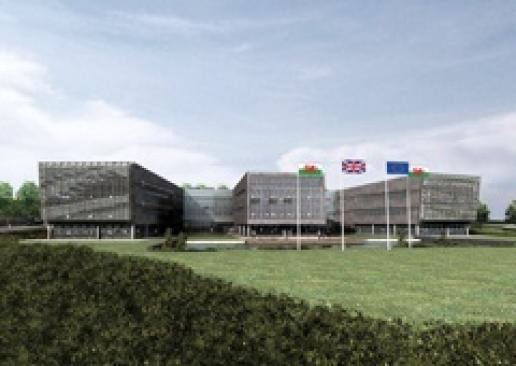 Wales might be best known for its slate, but its varied geology also includes granite, sandstone and limestone that all contribute to its built heritage.

When you think of Wales you tend to think of slate. But a lot of the varied geology of Wales has been used in the creation of the nation’s built heritage. Unlike the slate, much of the other stone has never been used beyond the borders of the principality, which means it is less well known further afield. Some of it is not even well known within Wales. Sometimes a local quarry, or delve, has been opened up simply to build a few unremarkable cottages and then never used again.

Granite from Gwynedd in the North, in the same region as the slate comes from, was exported as setts for roads in the north of England in the 18th and 19th centuries, and Trefor Granite is still available from stone specialists Cerrig in Pwllheli.

Some of the local granite – from the igneous overburden of Cwt-y-Bugail slate quarry – was used for the walls of the new visitor centre on Snowdon but, to the chagrin of the locals, the roof was covered in Roriz granite from Portugal that was believed to be more durable. The climate at the top of Snowdon is extreme. Windblown sheets of winter ice can become so heavy they will bend scaffolding.

From the island of Anglesey in the North West of Wales comes Penmon Marble, which, like most British marbles, is actually a limestone. Good examples of the use of this carboniferous limestone in construction can be seen in the bridges to Anglesey and in the walls of Penrhyn Castle, built in the 19th century on the site of a medieval castle. Inside the castle is a vast array of different stones, including fireplaces of Anglesey Marble with their dark blotches caused by shrimp burrows.

In the North East of Wales you encounter the coal measures, more carboniferous limestones and sandstone – echoes of the geology of the Pennines – that go all the way down to the edge of the Black Mountain.

In the middle of this area is the Welsh equivalent of England’s millstone grit.

This Carboniferous sandstone in the coal measures was important in these areas in the 18th and 19th centuries as walling and freestone. It was carried westward with the railway as the track was laid to Aberystwyth in the 1860s, not least because the developer of the railway, Thomas Savin, owned Cefn Quarry at Ruabon, south of Wrexham.

Wrexham church is a well-known example of construction in the stone. At the other end of the line is a building in the same stone that is now part of the university at Aberystwyth.

Coming further south, through Powys in the east and Cardiganshire in the west, the local stone is a hard, grey, slabby greywacke. It is known around Aberystwyth as Aberystwyth Grit. It has also been called Cwmystwyth Grit and Llanddewi Brefi Blue Stone, although Llanddewi Brefi is better known now as the home of the Matt Lucas character Daffyd (“the only gay in the village”) in Little Britain.

The greywacke was an important local building stone that became popular for building Welsh chapels. It occurs as slab 75-150mm thick and is supported on shale, which makes extraction easy.

In the South East of Wales there is a vast area of old Devonian red sandstone that stretches from the Brecon Beacons to Hereford and Leominster. It is from Callow Quarry here that Black Mountain Quarries extracted the stone that has recently been used for a major refurbishment of the butter market square in Abbergavenney because it was a good match to the 19th century market building. There are other working quarries in this area and the stone is frequently used for walling, paving and some roofing.

Pennant is produced from quarries around the old coal mining areas, including the Forest of Dean where Forest of Dean Stone Firms have expanded considerably in the past few years along with demand for their Pennant paving, in particular, and building stone (see page 34 of this issue).

But in spite of the variety of stones in Wales, it is the slate that is the most iconic of its building stones, which is why it was chosen for landmark buildings such as the Millennium Centre opera house and Welsh Assembly buildings in Cardiff Bay, the Waterfront Museum in Swansea (which also has Pennant paving from the local Gwrhyd Specialist Stone Quarry) and the £20million Welsh Assembly offices finished this month (May) in Llandudno.

The new offices have 2,385m2 of 20mm Heather Grey slate rainscreen cladding from Welsh//Slate’s Penrhyn quarry in the mountains just a few miles from the development. It was fixed by contractors Cerrig. The building is designed to achieve a Breeam ‘excellent’ rating, showing how indigenous natural materials like Welsh slate can be used successfully as a striking architectural feature in sustainable developments.

Championing stone in Wales is the Welsh Stone Forum, chaired by John Davies, now retired but previously with the Countryside Council for Wales. Dr Jana Horák, a geologist at the National Museum of Wales in Cardiff, recently took over as secretary of the Forum. The geological department at the National Museum of Wales is second only to the geological department at the Natural History Museum in London.

The Welsh Stone Forum was formally established in 2003, growing out of a conference in Cardiff the year before. Unlike the Scottish Stone Liaison Group, which was its model, it has never enjoyed the level of backing from Cadw that the Scottish Group receive from Historic Scotland.

Its main activities have been field trips, from which an impressive annual publication that the Welsh Stone Forum call their newsletter has been produced. The newsletter is doing a lot to collate the informal information about stones used for buildings in Wales. All the newsletters can be downloaded as PDFs from the Welsh Stone Forum website (the web address is at the bottom of this page in the ‘acknowledgements’ panel) and are well worth a read.

Having limited resources means the Forum has to call on the time of its 87 members whenever it wants to do something, such as creating an inventory of stones used for buildings in Wales similar to the Strategic Stone Study in England that English Heritage have committed £500,000 to, with another £500,000 to come.

Has the Forum achieved as much as had been hoped? “Yes and no,” says Jana. “There’s a network, so now if there’s something I can’t sort out myself at the museum I know other people who can help. We’re getting to the point where we have enough recognition and we’re ready to start pushing forward. There’s a question of what the Forum should be doing. John Davies and I would like the Forum to become more strategic and, in a minor way, start lobbying.”

They want to reach the local authority and Welsh Assembly planners to champion the cause of extraction and use of local stones, although Jana says one problem is that the 3.5million population of Wales lacks the equivalent of the Cotswolds or Harrogate – wealthy areas that will support the use of local stone in building to maintain the character of areas.

The Forum has been emphasising the issues of encapsulated carbon in imported stone and ethical trading. But, says Jana: “We’re on our own. A little band of crusaders.”