Book launch: After the Fire by Angelo Hornak 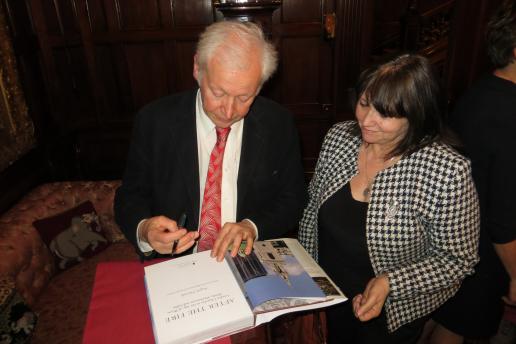 Angelo Hornak signs a copy of his book, After the Fire, for Karena Phillips during the pre-launch presentation to the Worshipful Company of Masons in London in July.

After the Fire: London Churches in the Age of Wren, Hooke, Hawksmoor and Gibbs by Angelo Hornak (ISBN: 9781910258088). Published by Pimpernel Press, London. £50 hardback.

As you might expect of a book from a distinguished architectural photographer and historian such as Angelo Hornak, the 380 pages of After the Fire are brimming with stunning photography and filled with facts about the rebuilding of the churches of London after the Great Fire of 1666. Unusually, Angelo even has a wealth of knowledge about the stone used as far back down the line as the quarries themselves.

He demonstrated his depth of knowledge about his subject when he spoke about his book to the Masons' Livery Company at Cutler's Hall ahead of its publication in July.

The book marks the 350th anniversary of the fire that led to the rebuilding of London in stone – notably, of course, Portland limestone.

The fire tooks its tool on 87 parish churches, including St Paul's Cathedral (not to mention at least 13,000 houses).

In After the Fire, Angelo Hornak explores the churches built in London during the 60 years that followed the Great Fire, as London rose from the ashes more spectacular than ever.

The catastrophe gave Christopher Wren and his colleagues, who included Robert Hooke and Nicholas Hawksmoor, the opportunity to explore monumental architecture as they rebuilt St Paul's and 51 other London churches in a dramatic new style inspired by the European Baroque.

A decade later, the pendulum of taste was swinging away from the Baroque of Wren and Hawksmoor and it was James Gibbs' more restrained St Martin-in the-Fields that was to become the prototype for churches throughout the English-speaking world – not least in North America – for the next hundred years.

Although After the Fire was published on the anniversary of the Great Fire, Angelo Hornak told the Masons Company that the date was happy coincidence rather than careful planning. He said the rebuilding of London after the fire had always fascinated him and his history was based on the study of London's churches.

The rebuilding of London after the fire was decreed by various Acts of Parliament and paid for by a tax on coal, with three-quarters of the revenue from the tax being used for the churches alone.

There was so much building required that immigrant labour had to be used, loosening the Masons' Livery Company's hold on the trade in London – a grip it was never to regain. But the family of a former Master of the Masons' Company, Thomas Strong, did particularly well out of the rebuilding work, being paid twice as much as any other masonry firms working on the rebuild. In those days, masonry companies were at the pinnacle of the construction industry and the Strongs ran one of the main firms.

The priority was to get the churches built and closed to the weather, so the steeples, which today form some of London's most recognised landmarks, were often added many years, even decades, later, although the designs of Wren, Hook and Hawksmoor were adhered to. Angelo argued that the most famous steeple is that of St Mary-le-Bow, which houses the famous Bow Bells, which is second in height only to St Brides. Angelo showed a photograph of St Bride's taken from the ground and pointed out that the dragon weathervein that tops it is 9ft (2.7m) long.

The book can be obtained from book shops and online.