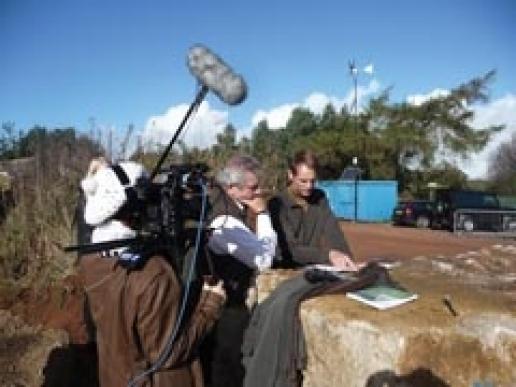 Choosing the Mandale Fossil for the Richard III memorial.

In spite of a bid by the distant relatives of Richard III to have the remains of the king interred at York Minster, the High Court has decided they should go to Leicester, where they were found under a car park in 2012.

A monument to the medieval King is to be built in the aisle of Leicester Cathedral of Swaledale Fossil supplied by Britannicus Stone, the company Orlando Boyne has established in London to supply British stones for major projects.

The tomb has been designed by Heyningen & Haward Architects and work has already started on sawing and polishing the 3.5tonne block of the Yorkshire stone for the monument.

The monument will be produced from a single block sawn into a trapezoid, polished, with a simple cross cut deeply into the upper face.

The tomb will lie on a simple plinth of Pietra Dura with the coat of arms of Richard III carved into it. Heraldic colours will be created by using Dukes red sandstone from Chatsworth and (probably) a pure blue fluorite like Britannicus Stone’s Ball Eye Blue.

The creation of the monument has been filmed by a Channel 4 team that accompanied Orlando Boyne to the quarry to select the block of Swaledale Fossil that will be used for the tomb.