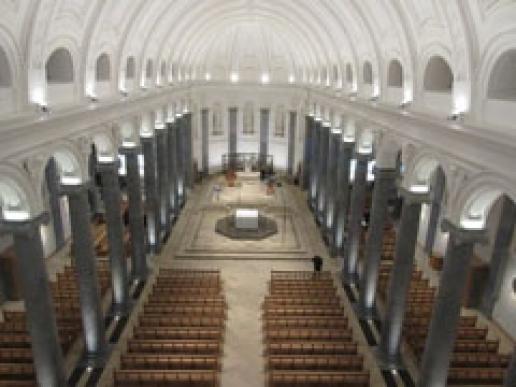 Ireland’s National Inventory of Architectural Heritage chose the restored St Mel’s Cathedral in Longford as its building of the month in January.

The cathedral was severely damaged in a fire at Christmas 2009 – so severely that it was thought at one time it might have to be demolished.

But then the stone and conservation specialist consultancy of Carrig Conservation, based in Dublin and London, was brought on to the scene and a rescue plan was devised.

It involved replacing all 28 load-bearing ionic columns made from Irish Blue limestone, which was a major engineering and stonemasonry feat (which was explained in Natural Stone Specialist magazine November 2013 issue).

The columns had been built originally using the stone on edge, which had contributed to the splitting and cracking of the columns as a result of the fire and the dousing of it by firefighters using water in the sub-zero temperatures of that night in 2009.

Carrig determined that the replacement stones would be laid on bed so that the columns would have maximum strength, but still wanted each stone of the columns to match the originals at 1.8m high. That proved impossible, although Stone Developments (since taken over by Belgians Brachot-Hermant) came close to it. The company supplied individual sections of stone for the columns at 1.75m high from its quarry in Carlow. And that was just the beginning. Turning the blocks of stone into cylindrical sections of columns, complete with entasis, to a tolerance of less than ±2mm tested both the skill and the ingenuity of the sawyers and masons, with a vertical lathe being developed to shape the segments.

You can read a report on the Cathedral renovation by Peter Cox and Mary-Liz McCarthy of Carrig Conservation on the Inventory of Architectural Heritage website at bitly.com/Carrig-StMels.

The aim had always been to see the cathedral back in use for the Christmas celebrations in 2014 – and the aim was achieved with Midnight Mass being held at St Mel’s on Christmas Eve.