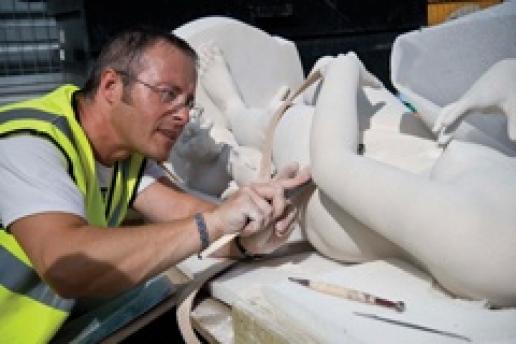 As luck would have it, just at the time Chiswick House Gardens needed a Midici Venus to replace one that had disappeared from the top of a column in the gardens, carver Andrian Melka had a copy of the original in his workshop that he was repairing for an antiques dealer.

It meant he was able to have it scanned so the Jordans Basebed limestone from Albion Stone in which it was being produced could be roughed out by the Robostone CNC robot at J Rotherham’s in Yorkshire.

The statue was still hand finished by Andrian, but he says the robot saved him five or six months of work. Knowing when he submitted his tender that he could use the robot meant he was able to offer the best price for the project, which no doubt helped him win it, as did the speed at which he was able to produce it – although he could not achieve the three- month time scale the clients originally wanted. “I told them it couldn’t be done,” says Andrian.

Even with the help of the robot the 1.56m high statue cut from a single block of Portland stone weighing 1.6tonnes took six months to produce from the time Andrian collected the stone from Albion Stone’s quarry in March last year to the time it was hoisted to the top of the column.

Andrian is now working on a replica of another Venus, this time the Canova Venus, the original of which is in Leeds, which is where Andrian has his workshop. He is producing it in French Lepine Limestone. Then he is off to San Francisco to carve a lion, among other works, for a private house, and from there he goes to Santa Barbara to put the finishing touches to a fountain.