Cembrit have the Malthouse covered 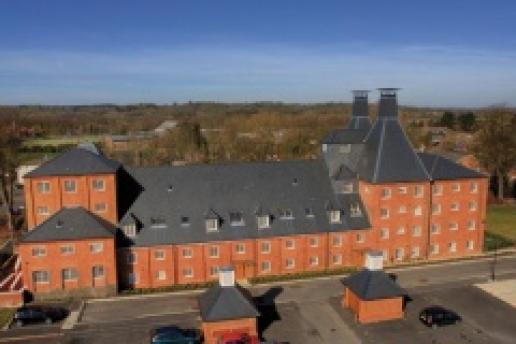 A distinctive feature of the Romsey skyline has been preserved by Glendyne natural slates from Cembrit.

It is at the Malthouse, an old brewery building that has been converted into apartments. The Glendyne slates have been used to help maintain the building’s distinctive appearance.

Built in 1899, the Malthouse was once owned by local brewer Strong & Co. The conversion, carried out by Stanborough Construction, has transformed the interior of the building into modern apartments while preserving its exterior to reflect its industrial past.

Glendyne slate is quarried from the Canadian town of Saint Marc du Lac Long in Quebec. It is a dark blue / grey, with a fine, consistent grain and no history of pyrititic inclusions.

Cembrit describe it as being similar in character to the Welsh Ffestiniog Slate. They say it offers great value for money and forms part of the range of natural slates they sell from their five outlets around the UK. They also source slate from Spain, Canada, Brazil, China, India and Western Europe, including material from UK quarries in Wales, Cornwall and Westmorland. All their slates comply with BS EN 492:2004 and are manufactured under the control of a BS EN ISO 9001: 2000 quality management system.