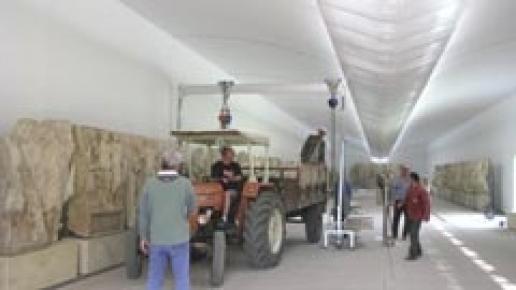 One of the most extraordinary projects by a British conservation company is Cliveden Conservation’s work at Aphrodisias in Turkey. Cliveden are now in their 18th year at this important city of the ancient world.

Aphrodisias was famous for its sculptors. The surrounding hills are of good quality white and grey marble, distinguished by a large crystal size. And recent isotopic studies of the quarries, buildings and statuary have shown that not only did Aphrodisias export sculptors to the Roman Empire, but raw marble as well.

Under the direction of the Site Director Roland Smith, Professor of Classical Archaeology at Lincoln College, University of Oxford, Cliveden have been conserving many of the fine collection of antique statues excavated at this site in south-west Turkey.

The latest part of Cliveden’s work to have been completed is the conservation of more than 70 reliefs from the 1st century AD from a temple complex known as the Sebasteion.

Aphrodisias, like many large cities in Asia Minor, looked to Rome for the design of public buildings. But at Aphrodisias the masons and carvers showed a singular, more adventurous architectural spirit, as can be seen from structures such as the stadium, which survives today largely untouched and has marble seating for 24,000 spectators.

There is a temple gateway that rivals any in Italy and not one but two agoras (open meeting areas), one with a dominating pool of running water that stretches the full length of the area.

But the piece de resistance is the Sebasteion, which rivals any temple built to display the conquests of the emperors in both size and decoration.

It is more than 90m long on either side of the street, three stories high with all three orders of architecture represented (the first storey Doric, the middle Ionic, and the third with smaller Corinthian half columns).

Along the facades, more than 180 reliefs illustrate the glory of Rome – Claudius conquers Britannia, Armenia is felled – and to place Aphrodisias in the thick of ancient myth, compositions of the flight from Troy and the birth of Aneas are set beside the more prosaic depictions of generals and horseman.

During the past 10 years Trevor Proudfoot, the proprietor of Cliveden Conservation, and his team have trained local builders and craftsmen in the use of sculpture conservation techniques of dowelling with stainless steel, the use of lime mortars and of casting replicas in composition marble.

The reliefs conserved in the latest phase of the work are now set up in a purpose built hall as an annex to the site museum.

Next, one corner of the temple complex is being rebuilt, obeying the strict rules of anastylosis that dictate only structures that have 75% of the original fabric available are rebuilt, in order to guarantee accuracy. As part of this work Cliveden’s sculpture team have made 13 replica casts.