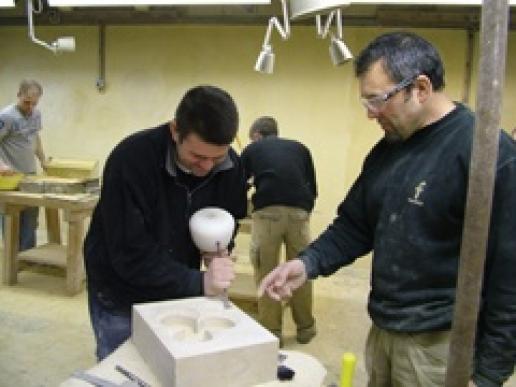 Brendan Teasdale is passionate about the built heritage. When he is not repairing buildings he is either learning more about the skills needed to carry out his work or teaching other people the crafts he has already learnt. “My work is my hobby,” he says.

Brendan Teasdale’s company, Team Force, based in Blyth, Northumberland, are not the biggest stone and conservation specialists in the North East, but it is a tribute to them that they have been awarded the contract by English Heritage to carry out the conservation work now underway at St Cuthbert’s Priory on Lindisfarne, the region’s highest profile historic site.

The significance of the site dates back to the 7th century although the ruins on the island today are from the 12th century. The conservation work taking place there will be the highest profile Team Force have ever carried out, although they have worked with English Heritage before on smaller projects.

The four-months work, with a strict completion date of 5 November, includes replacing hard cement pointing with lime mortar and carrying out stone repairs using Stancliffe’s Doddington sandstone, with its mixture of colours ranging from light buff to purple, that is local to the area.

But as well as the work, Brendan is expected to provide some training for conservation professionals while the job progresses.

Not that he minds, because training is one of his fortés. And he gets plenty of practice now he has taken over from Neville Slack, who has retired, as the ‘masonry skills’ and ‘setting out’ tutor at Orton Trust, the much respected training organisation in Northamptonshire.

Brendan has first hand experience of the value of the long-weekend courses at Orton Trust because that is where he learnt his stonemasonry skills.

He was a lead worker who had developed a speciality of making decorative replacement hoods for downpipes on guttering for the restoration of historic buildings. In 2003 Brendan and his wife, Lee, set up their own business, with Brendan offering his services as a specialist lead worker and Lee looking after the financial side of the firm.

They opened an office in Blyth Community Enterprise Centre, part of the regeneration programme of the town’s docks, and are still there, although they are in their third office, each one being a little bigger than the last.

It was while Brendan was working on historic buildings that he came into contact with stonemasons. He was impressed with their work and, as he says: “I thought I wouldn’t mind having a go at this stonemasonry malarkey.”

His brother-in-law, who is a monumental mason, gave him a leaflet from the Orton Trust and Brendan booked himself on a course.

“I had never put a chisel to a piece of stone in my life,” he says.

When Brendan arrived at the Orton Trust’s training centre, a disused church in the Northamptonshire village of Orton, the masonry lecturer, Neville Slack, told him to be careful because stonemasonry was addictive. Neville also told him he would be surprised how quickly he would progress. “And I was; I was really surprised. We squared up a block first then made a simple moulding for a cornice. I enjoyed it so much I went on every stonemasonry course that year and at the end of the year I thought back to what Neville had said about it being addictive. He was right.”

Having good hand-eye co-ordination and a feeling for working stone, he found masonry almost second nature to him. But he had a lot to learn and he attended courses at Orton Trust for three more years, culminating with him winning the ‘Student of the Year’ award in 2008.

As well as the masonry courses, Brendan has attended stone carving courses at Orton, although he says it is for his own satisfaction more than anything else.

What he learnt about masonry in that first year at Orton made him want to know more about the lime mortars used with stone, so he attended a weekend course at the Scottish Lime Centre. He went back later for more week-long courses and gained a level two SVQ in lime mortar.

He also has a level one SVQ in dry stone walling after spending a week on a course with two of his operatives learning the skills of a waller.

“I do believe if you’re going to be asked to do something you should take the time to learn to do it properly,” he told NSS, while adding: “You never learn it all. I’m going back to the Scottish Lime Centre tomorrow for a half-day course on working with lime mortars in winter, which you can do if you’re careful.”

Brendan is grateful for the training he has received and piles praise on his masonry tutor at Orton in particular. “I have to give Neville credit: the way he taught; his methods of working stone; and his enthusiasm. I couldn’t have had a better tutor.”

He was proud to be asked to take over from Neville, although the first course he took he had been booked on as a student.

Richard Tyler from the Trust did not have a tutor for the class and asked Brendan if he would step in. “I said I would and he said: if it works out, could you do a couple more? I suddenly thought: maybe something like this is what I need.

“I went down to the course a little bit nervously but within a couple of hours I was well into it. I thought: this is great, this teaching. I have learnt more than ever teaching students, as I need to be aware of everyone’s project and new sets of problems.”

Academically, Brendan had not shone at school. He left with no qualifications and went to work for a lead sheeter and tiler in Durham City who, he says, he learnt a lot from. They worked on the stone castles and stately homes of the North East that he had first been introduced to at an early age by his grandfather, who enjoyed taking Brendan to see them just as Brendan now enjoys taking his own four-year-old daughter to see them.

Brendan loves working on those buildings, whether it is on the stone walls or the lead of the roofs and gutters. He considers it an honour to be paid to work on buildings that others have to take holidays and pay to visit.

Team Force now employ four other craftsmen as well as two office staff, but Brendan likes nothing more than being on site using his own skills, as he is at Lindisfarne.

“I’m mad keen on that. I like to get out as much as I can. I started this business so I could concentrate on the work I like doing, but you can end up spending too much time behind a desk. My PA, Gillian, does a lot of the desk work. I can work from a PCâ€ˆanywhere if I need to.”

His enthusiasm for learning is not over, however. Ray Stockdale, the Technical Manager (Northern Area) of English Heritage told Brendan about courses in conservation he had attended at West Dean college near Chichester, West Sussex, and this year Brendan has signed up for a Diploma in Conservation there.

It will involve attending 10, Monday-to-Thursday courses before completing a final essay. He says it will take him a couple of years but he wanted to do it because he is always interested to hear other people’s views on historic building issues.

“Anyone who knows anything about restoration knows its about opinions, not facts. There are different views and no-one’s right or wrong. My experience of English Heritage hasn’t been that they say you have to do it this way and no other. They have been open to suggestions and I think that’s the best way. If you take all those different ideas on board you get a better result out of it. English Heritage talk to me about issues and we come up with what’s best for the building.

“You need site experience. When you get on-site you encounter problems that you haven’t been taught about. I have reached the point now where I know enough to be able to come up with solutions. Some people have been on a course and have learnt one solution which they try to impose on everything.”

He says his proudest moment was when he received the ‘Student of the Year’ award from Neville Slack. “I couldn’t have wished for anything better. But Neville said to me when he gave me that award: don’t think you know everything now. I said: I won’t; this is where it begins. He said: That’s my lad.”

It is to gain still broader experience that he is prepared to spend six-and-a-half hours driving to West Dean from Northumberland for the courses there. Then there is the fuel and lodgings, as well as the course fees. It will cost about £8,000 all together, which is a different league from the Orton Trust’s three-day courses that cost £150 plus £25 bed & breakfast.

As well as his own studies, Brendan has also taken on more teaching, helping to deliver training courses and skills days for the Heritage Skills Initiative at the North of England Civic Trust. He ran the first of these courses last month (July).

You can’t help wondering where he finds the time, because when he is not actually working, he is either finding out more about conservation and the skills needed to work on heritage buildings or teaching others what he has already learnt. Does he never get tired of it?

Brendan dismisses the suggestion. “Work is my hobby,” he says.