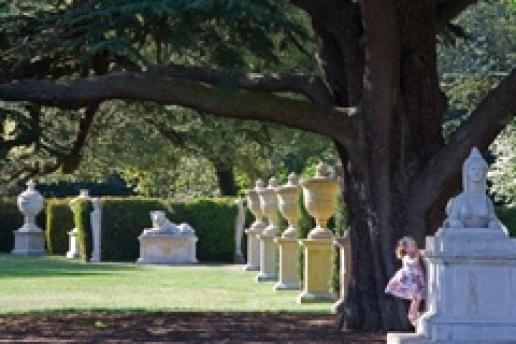 Chiswick House Gardens, the birthplace of the English Landscape Movement and the setting for one of London’s most beautiful houses, were revealed to the public again last month (June) after a two-year, £12million makeover.

The regeneration of the gardens is a result of many years of campaigning, four years of fund-raising and two years of work on the site by contractors including stone and conservation specialists Cliveden Conservation, Del Stone and DBR. Carver Andrian Melka reproduced the Midici Venus.

English Heritage manage the House and the London Borough of Hounslow own the Gardens. They established the Chiswick House & Gardens Trust in 2005 as an independent charity to drive forward an ambitious rescue plan for the gardens.

Supported by a Heritage Lottery Fund grant of £7.9million, the work recovered original vistas and design from decades of disrepair and underfunding. It included the repair and restoration of the statuary and garden buildings and the building of a new café. The result is a comfortable balance between an historic landscape and a public park.

More than 1,600 trees were planted, including trees propagated from the original 18th century cedars of Lebanon. Historic views from the Classic Bridge were opened up. The 19th century conservatory housing a rare and internationally important collection of camellias was restored, as was the Walled Gardens, which will be open to the public on special occasions.

The café is close to Chiswick House. It has indoor seating for 80 people and external seating for more than 100. There is a newly created children’s playground beside it.

Chiswick House Gardens spread over 65acres. They were originally created by William Kent with Lord Burlington. They worked on them throughout the 1720s and ’30s, creating a magnificent setting for Chiswick House, the first and one of the finest examples of neo-Palladian design in England. The gardens inspired other designed landscapes from Blenheim Palace in Oxford to Central Park in New York.

One of the many famous features of the gardens is the Exedra, a lawn lined by alternating cypresses and stone urns closed by a semicircular dark yew hedge, forming a backdrop to Lord Burlington’s collection of ancient Roman and 18th century sculpture. A lake is crossed by a Portland stone bridge said to have been designed by James Wyatt that was restored, taking care not to pollute the water below. That part of the project was recognised in the Institute of Civil Engineers’ awards scheme.

This is just some of the stone work in the garden on which Dannatt Johnson were the conservation architects working with Cliveden Conservation as specialist contractors. Project architect Caroline Filippini afterwards described Cliveden as “a pleasure to work with”.

Cliveden’s £450,000 contribution to the project was made throughout the two-year programme and they were involved before that, carrying out preliminary reports for the Friends.

Cliveden Managing Director Trevor Proudfoot says there was a wide range of statuary representative of various styles as the owners of Chiswick collected works from wherever they found them. Stone used in the garden includes Portland, Bath and Cotswold limestones that would have been easily transported along the River Thames.

Other features in the garden include an Inigo Jones Gateway, acquired by Lord Burlington in 1738, the Cascade, an Italian renaissance-style waterfall designed by Kent and Burlington dating from around 1738, and the Raised Terrace, planted with roses and honeysuckle.

Dannatt Johnson were also involved with the restoration of the Conservatory, completed in 1813 and housing the oldest collection of camellias outside of China and Japan. Here the specialist contractors were DBR who repaired the stone walls while main contractors Walter Lilly laid 300m2 of new 50mm thick York stone flooring, including a circular design in the rotunda. The stone was supplied by Keystone in Coventry.