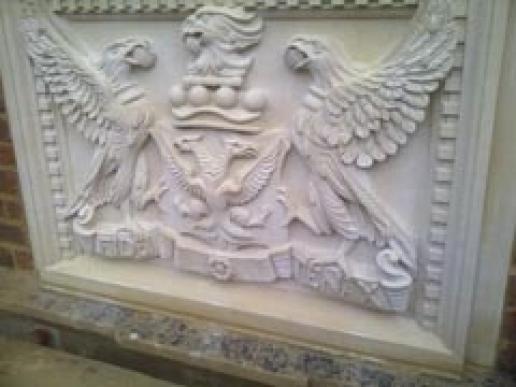 James Kirby believes he had probably the best grounding in traditional stone carving available as a student of the City & Guilds of London Art School. He says: “They are the last bastion for teaching proper carving in the whole of the country and are rather important for the preservation of carving in Britain.”

Trading as James Kirby Stonecarving, James says: “Ever since I started to train as a stonemason, my aim was to further my skills and knowledge of traditional and historic stonework. I also wish to increase my contribution to the conservation and restoration of England’s built environment.”

His background certainly stood him in good stead when he received a commission last year to recreate the badly weathered Bath stone coat of arms of the Wolverton family over the front door of Warren House, Kingston-upon-Thames.

The earliest parts of the house are Tudor, although most of what can be seen today was built in 1860, with later additions made after George Grenfell Glynn, the second Baron Wolverton, bought it in 1884. Today the house is a conference and event centre.

James Kirby believes Bath Stone was probably used for the original coat of arms because the Victorians did not want to use a French stone. James has used the French Caen limestone for the replacement.

He took the dimensions for his coat of arms from the original, 1200 x 800mm x 80mm thick. He also had a pen and ink drawing of the Wolverton coat of arms and he sought some help with heraldry in order to ensure it was correct.

James started the process of making the new coat of arms at the start of last year and the finished piece was installed just before Christmas. The main reason it took so long was, as ever, all the approvals needed to get the design agreed, even though there was all round approval of the drawings and the clay maquette that James produced. It was just a question of waiting for official approval.

The original carving has been retained on site with the intention of putting it on public display inside the building.