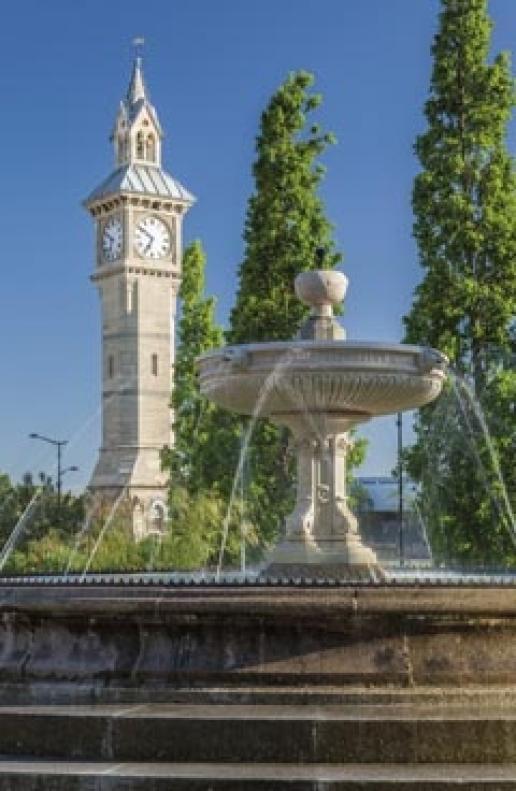 One of Devon’s much loved landmarks is the Barnstaple town square with its clock tower and fountain. The tower was built in 1862 as a memorial to Prince Albert, who died the year before. It is known as the four faced liar, because only one of the clock faces on each of the four sides of the tower ever tells the correct time.

The memorial was designed by local surveyor RD Gould and was built by a local builder by the name of John Pulseford for £216. In front of the tower is a listed fountain built of Portland limestone with a granite plinth. The fountain was erected to record the gift by CS Willshire Esq of the railings enclosing the square during his mayorality in 1876-1878.

In 2008, during renovations to the square, the clock tower was cleaned with the Stonehealth DOFF superheated water system and the fountain was restored.

Sadly with the extreme weather conditions of the harsh winter of 2010–2011, the fountain was damaged by frost. Parts of it cracked and broke off. The fountain, which normally sprays jets of water throughout spring and summer, could not be switched back on that year.

Last year the money was found to carry out repairs and Orchard Stonemasons of nearby Silverton, started the work which would involve cleaning and repairing the fountain.

In the first instance the Doff system was again used to clean and reveal the state of the fountain. The existing Portland stone was effected badly by the harsh weather and much of the lettering had deteriorated beyond recognition. Orchard Stonemasons took rubbings of what remained and the Portland stone sections were reproduced in new stone by Mike Orchard to match the original mouldings and lettercutting. It was all done by hand and the new stone was fixed with lime-based mortar.

The fountain will be in full flow again this spring and summer once the risk of frost is over.