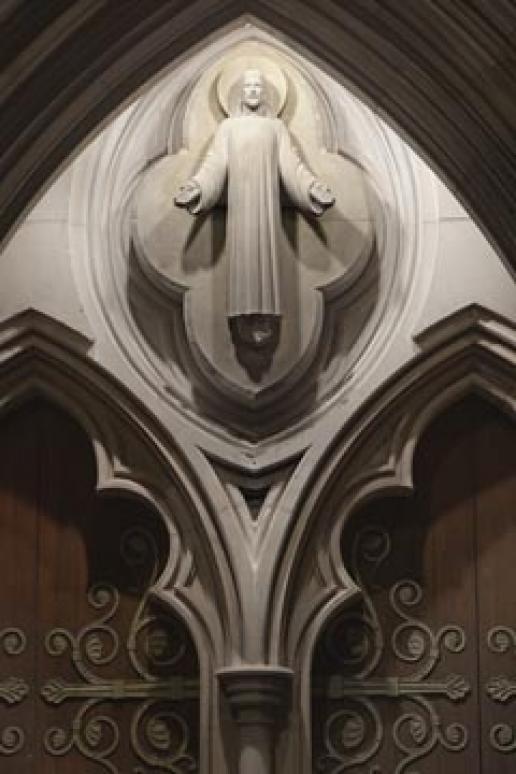 Geraint Davies, who trades as London Stonemasonry, has produced a lot of architectural masonry and even some heads and hands for statues in Roman Catholic churches over the years. But this was the first time he had ever produced feet, let alone a whole statue.

The finished piece is now positioned over the South Porch entrance of the Grade II* Listed St James’ RC Church in Spanish Place, London, a church designed by Edward Goldie and opened in 1890.

Geraint Davies was commissioned by Father Christopher Colven to design and produce the statue of the Transfigured Christ to an initial design that the stonemason had completed in June 2011.

It took a year of presentations to various planners, committees and even at the archbishop’s palace before the statue was finally given the green light. “It was all very, very formal,” he told NSS.

In September a 1ton block of Portland Basebed was delivered to Geraint’s studio. “It was absolutely the most perfect piece of Portland I have ever seen,” says Geraint.

But how to get it inside? He enlisted the help of some volunteers and “we used cutting edge ancient Greek technology”.

Portland limestone was always going to be the stone used because the surrounding stone of the Gothic revivalist church is Portland.

During the next 10 weeks the figure emerged. Geraint used traditional carving methods to work the stone, basing the face on that of a friend who he thought looked suitably serene.

Geraint:â€ˆ“We had a very narrow window for the fixing and we ended up doing eight days’ work in five. Everything that could go wrong did go wrong, but we persevered through the cold dark evenings and it paid off.

“I’d wrapped the figure in so much bubblewrap he looked like an Apollo astronaut! We had a scaffold in place and a special hoist there. We also had to work the existing stone back 300mm and dress it in. This was very time-consuming.

“Our design for fixing was a cross shape at the back, which we keyed into the stone. We used steel fixings and lots of industry-standard glue and mortar to secure the statue in place.”