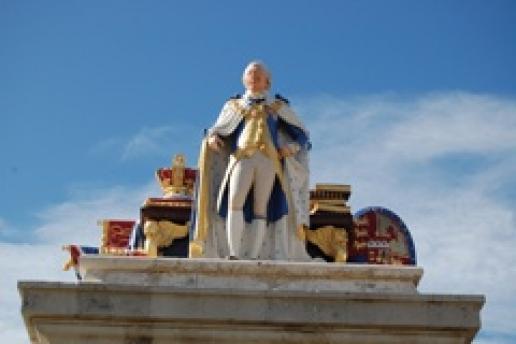 A restored Coade stone statue of George III with unicorn and lion on a Portland limestone plinth is the centrepiece of Weymouth’s Georgian townscape. Chris Daniels, Accredited Conservator, Consultant and Technical Manager of Osirion Building Conservation discusses the work involved in the project

As the great, great, great, great grandson of George III it was fitting that the Duke of Gloucester should unveil the commemorative plaque to the newly restored King’s Statue on Weymouth seafront. He also attended a luncheon hosted by the council where he met some members of the conservation team that carried out the work – Phillipa Hammond, Nigel Biffen and Mark Gallagher.

Weymouth & Portland Borough Council (WPBC), funded by the Heritage Lottery Fund, had awarded the contract for the monument’s restoration to Osirion Building Conservation based in Dorset. Using the conservation report commissioned from me by Colin Ellis, WPBC Conservation Officer, some years previously, the process was to clean, dismantle as much of the broken statuary as necessary, repair, then rebuild it before painting and gilding.

The work started in September 2007 and carried on through the winter on a specially protected scaffolding.

After the accumulation of 200 years of paint and dirt had been removed by carefully controlled high-pressure steam cleaning using the Stonehealth Doff system, the cleaned monument showed the Portland stone plinth to be peppered with holes and fractured by the expansion of rusting iron cramps. The rusting metal had caused the ashlar to break and collapse.

The figures of the lion, unicorn and the king with his symbols of state are made from Coade Stone, an early engineered stone that reached the height of its popularity during the housing boom of the 18th century. They were also in a parlous condition. Not only was rusting metal pushing the pieces apart, many years of inappropriate repair had exacerbated, rather than cured, structural and construction problems.

The most impressive discovery was the exquisite detailing on all the statuary that had been obscured by up to 5mm of paint layers. In an ironic twist, this paint had served to cushion the corrosive effect of weathering to the extent of preserving most of the fine modelling.

Traditionally, Coade Stone was produced by the best sculptors and modellers of the time and has resulted in some exceptionally fine pieces. A good example is the lion at the end of Westminster Bridge in London.

The statue was originally delivered to Weymouth and assembled four years before it was erected in its present position. The subsequent re-assembly on top of the Portland stone plinth was poorly executed, allowing metal fixings to become exposed. Pieces were mounted incorrectly (with damaging alterations carried out to get them in places) and elements such as the Cornucopia not making it to the final position. All of this gave a head start to the process of deterioration to this fine piece.

The question of which paint scheme to use had been discussed on a number of occasions. The report on the statue I had written in 2004 had noted that lead-based paints had been used originally and also discovered traces of gold leaf. A second investigation confirmed the use of lead-based paints and described the colours.

Silicate paints were proposed for the renovation work as it was determined that the durability and low maintenance requirements would suit the exposed position of the statue. The main problem would be irreversibility and lack of strong colours. After much expert discussion and analysis it was decided to use traditional, lead-based paints for the work. These were sourced, licences obtained and the palette supplied by Osirion Building Conservation was agreed upon.

The scheme for the Union Jack was created by folding a sheet with the flag design on it in the same way as had been modelled in the clay and transferring the position of the colours to get a true representation, rather than the incorrect style of the previous redecoration.

The main body of the king was originally constructed around iron bars and cramps that were all in advanced states of decay. The head and shoulders, a separately cast and fired piece, were anchored with a bolt through the head that had completely disintegrated – it was only gravity and painted lime pointing that prevented it falling off.

There is now a stainless steel armature installed, anchored securely in the Portland plinth, running through the leg and torso to a bolted fixing at the head. A dressed lead cap with stainless steel spikes was fixed to the top of the head to prevent the ever present seagulls landing and leaving their mark!

All accessible rusted cramps were carefully removed from the stonework and replaced with stainless steel. These were set in behind the original stone fragments recorded, removed and stored during the cleaning. When no original stone was available, Dutchmen were cut in, shaped to follow the lines of the missing stone rather than with straight joints because it was decided this was a good match to the way original pieces had been re-used.

The original stone had endured many decades of exposure to the coastal environment, so to reduce the visual impact of newly cut smooth stone, each insert was sandblasted to give it a texture to match the original. This meant that the pieces had to be fitted exactly as there was no dressing in carried out on site.

The Coade Stone lion had some open joints where the fired pieces were joined together, although there was no evidence of movement. The presence of cupreous stains to the stone beneath indicated non ferrous dowels. There was a section of crudely modelled cementitious mortar to the right side of the head of the beast that was removed to reveal a large section of the original material was missing. Special Coade Stone repair mortar was used to recreate the impressive leonine features.

Once ready, the lion and other elements were prepped, primed and gilded completely using thousands of pounds worth of gold leaf to give the appropriate finish. Environmentally controlled windproof and dust free ‘tents’ were constructed around each piece to provide optimum working conditions for this delicate task.

At some point in the past, probably just after World War II, the unicorn had lost its head and front leg, possibly due to the effects of war. The missing elements had been replaced with good quality castings of ‘cimente fondue’.

Unfortunately they were cast on a ferrous metal armature that is already in a state of deterioration and will eventually break the head apart. Therefore, a mould of the head has been made so that before the inevitable happens a perfect copy using more suitable materials will be produced by local students ready to be fixed in place when needed.

One ear was lost and the other was partially missing. There were also areas of the surface of the casting spalling off where the metal was just below the surface. These missing areas of the head, as well as a thumb of the King that was missing, were remodelled in epoxy putty on stainless steel armatures.

A new horn for the unicorn was made from glass fibre reinforced plastic [GRP] over a threaded stainless steel bar, primed and finished in gold leaf. The design of the horn is pragmatic to allow for its easy replacement, the stealing of it by ‘souvenir hunters’ having become traditional. Indeed, a spare has already been made in preparation for the next attack.

The vibrant colours of the statues were created using traditional-lead based paints by Warwick Brown, who also produced the naturalistic colouring of the king. With some investigative work carried out on the original finishes used (samples of which have been archived for posterity) it was decided to proceed with considered interpretations of heraldic and regal colour schemes to present this extraordinary monument at its best.

The realistic face tones were taken from an existing waxwork at Madame Tussauds that had reputedly been modelled from life, as was the Coade Stone figure, according to tradition.

This statue can be considered the centrepiece of the south coast town. And, with conservation work also carried out to other statues on the seafront, is part of the regeneration of Weymouth’s Georgian townscape.

Other statues worked on as part of this project were a marble and granite piece of local benefactor Henry Edwards that was Doff cleaned and had some small repairs carried out.

A life-size bronze of Queen Victoria was also cleaned and waxed to retain the rich patination the metal had achieved over the years. Her Portland stone plinth was poulticed to remove green cupreous metal stains, repaired with mortar and Dutchmen piece-ins, with the final step a shelter-coat of the stone to blend in the new work and provide a protective, sacrificial layer.

From Georgian, through Regency and into the mid-Victorian era, Coade stone was popular. Not least among it attractions was that it made work by some of the great artists of the day reproducible and, therefore, more affordable. And the fact that the formula for making it was kept a secret until it was unlocked by late 20th century science added to its mystery.

Coade stone takes its name from the family that made this early fired clay example of engineered stone. While no doubt the stone industry of the day took exception to it, it is highly regarded by today’s conservators who are involved in its restoration alongside stonework.

Coade stone was produced as ashlar, especially with finishes such as vermiculation that were expensive to produce in stone, and as key stones with carved figures over doorways. It made such work more widely affordable.

However, to enhance the reputation of the material, the Coade family employed some of the great artists of the day to produce original carvings from which Coade stone reproductions were made. Bacon, Rossi, Smirke and a great many others all carved work specifically for production in Coade stone.

Coade Stone reached a height of popularity when the company producing it was run by Mrs Eleanor Coade, assisted by her daughter of the same name and William Groggan, a distant cousin.

They moved the business from Dorset into Lambeth in London to supply the building boom in the city and Coade Stone quickly became fashionable in the capital. They had an illustrious list of customers, including George III himself.

Eventually the company passed into the sole ownership of William Groggan, who went bankrupt in 1833. His son, Thomas, tried to resurrect the business but the material did not return to its former popularity. The business eventually passed to one of its employees, Mark Blanchard, who was more successful and continued trading until 1870.

The secret of Coade Stone died with Blanchard and was only rediscovered in the 1990s by the British Museum. They said it consisted of ball clay with 5-10% ground flint, 5-10% quartz sand and about 10% soda-lime-silica glass that acted as a vitrifying agent.

The mixture was fired at about 1,000ºC to produce a vitrified material of exceptional durability. In restoration projects it often shows less deterioration due to weathering and pollution than the stone around it, although today’s stone companies would say it lacks stone’s much admired and distinctive patina of age.