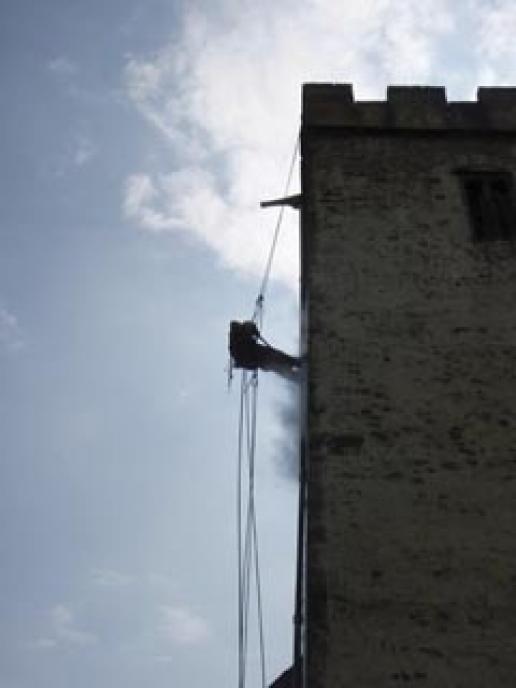 Philip Scorer, who runs his own conservation business as well as teaching part-time at Weymouth College, has made a speciality of rope access.

He usually uses the technique as a quick and relatively inexpensive way of surveying masonry at close quarters, but it can also be used as a way of carrying out repairs and cleaning buildings, as it was at St Edeyrns Church near Cardiff.

The Grade I Listed church had been limewashed some years ago, but limewash is a sacrificial coating, the point of which is that it weathers and deteriorates rather than the stone it covers. It needs replacing every few years and that was the position at St Edeyrns when Philip Scorer was called in.

Rope access might look precarious, but it is in fact one of the safest operations in construction because of the regulations governing it that build in a significant redundancy factor – for example, a double rope system has to be used and there has to be two experienced people working together at all times. “It’s safer than changing a light bulb,” says Philip, who worked alongside Arthur Needham (pictured on the right on the rope) at St Edeyrns.

Philip: “The usual pattern is that an architect or church will ask me to carry out an inspection because they suspect something is wrong. So I do a full inspection.

“If there is urgent work that needs carrying out – such as minor repairs, often mortar repairs – they will ask us back and we will carry out the work on the ropes. You can do quite extensive work – we have replaced whole hood moulds from a rope.”

At St Edeyrns, the old limewash needed removing and Philip determined that the most cost effective way of doing that was with the ThermaTech high pressure superheated water system from Restorative Techniques, which gave him the controls in his hands while he was on the rope.

By being able to control the pressure in real time he was able to respond instantly to the conditions encountered. “The ThermaTech was the perfect machine for this job. It removed the old limewash without disturbing the underlying historic render and masonry,” he told NSS.

Not that this was the first time he had used ThermaTech from a rope. He also used the technique to clean bird droppings off the statues at St Mary Redcliffe Church in Bristol.

At St Edeyrns, with the old limewash cleaned off he was able to apply three new coats of limewash to leave the church clean and bright, as the picture at the top shows. And the whole job only cost the church about £3,000. If it had been carried out on scaffolding, the scaffolding alone would probably have cost that much.

Roped access is not the answer in every case. A time consuming job such as pointing a whole wall, for example, could easily be carried out on a rope but would probably cost more than putting up scaffolding because of the extra cost of employing someone with roped access skills. And where more extensive work is to take place the criteria will be different.

Nevertheless, rope access is often worth considering, as long as the person on the end of the rope also understands stone (and this magazine’s resident Expert, Barry Hunt, is another specialist in stone who offers a roped access service).