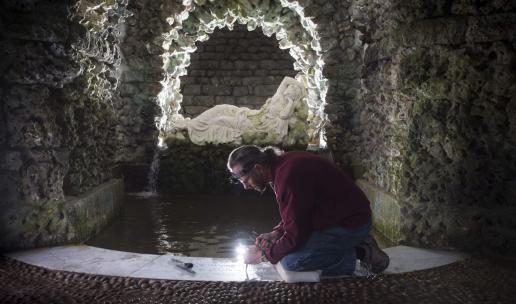 Iain Cotton refreshing the Pope inscription in the marble at the Grotto at Stourhead in Wiltshire with the nymph, Ariadne, reclining behind.

A National Trust team at Stourhead, in Wiltshire, is working with heritage experts from Cliveden Conservation to restore the lettering of a quote written by Alexander Pope in the first half of the 18th century and cut into a curved Carrara marble slab in the Grotto.

Years of people visiting the grotto and sitting on the inscription had worn the marble. But lettercutter, carver and sculptor Iain Cotton from Cliveden Conservation is working with Stourhead's National Trust team to re-cut the letters using traditional hand methods and tools.

Iain says: "A high degree of hand-eye co-ordination is required to re-cut each letter using small sharp chisels and lightweight hammers." Once the letters have been re-cut they will be given a light painted wash to make the quote easier to read.

Charlotte Toop, Stourhead’s Visitor Experience Officer, said this was a project the National Trust had wanted to carry out for a while. "To receive the funding to be able to do this work is very exciting. We are grateful to a generous donation from the Salisbury & South Wilts National Trust Association, which has made this work possible."

The inscription itself comes from Alexander Pope’s translation of a pseudo-classical poem. It reads: 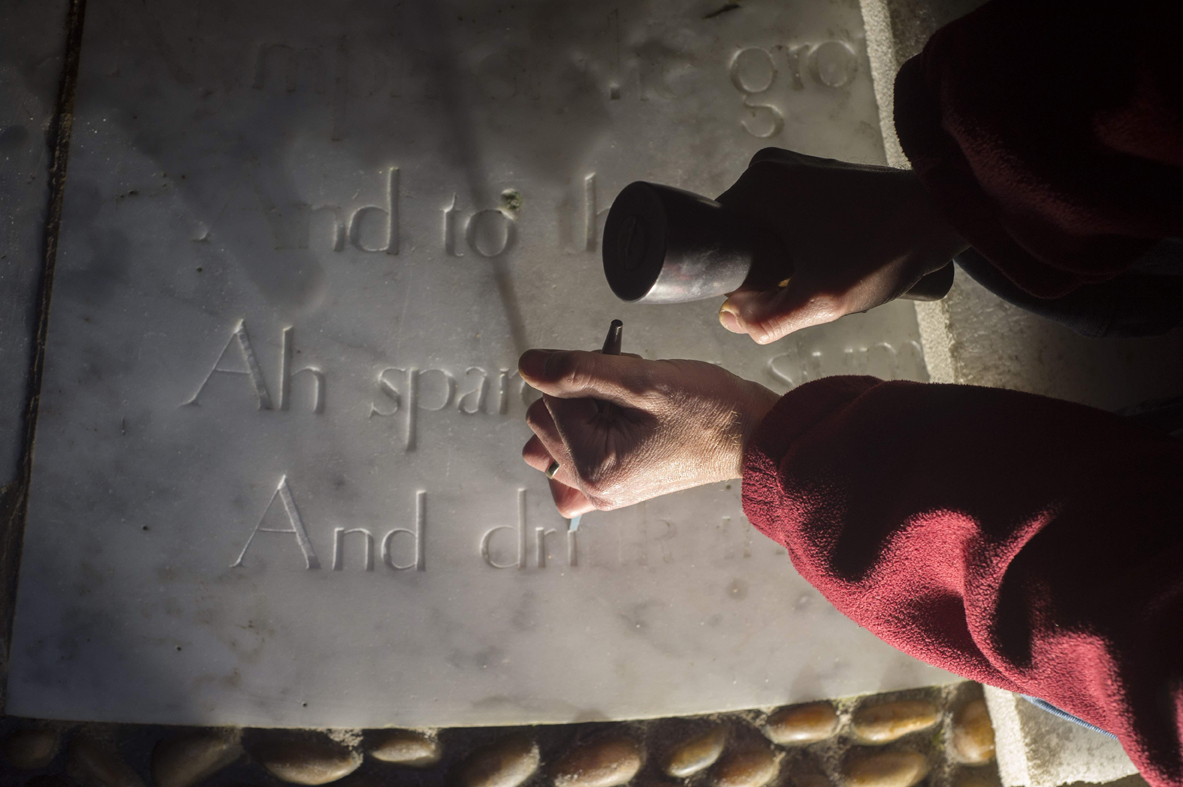 Nymph of the Grot, these sacred springs I keep
And to the murmur of these waters sleep
Ah spare my slumbers, gently tread the cave
And drink in silence, or in silence lave.

The carved lettering in the inscription is one of the earliest known examples of the revival of a sans-serif typeface (a typeface that does not have the small projecting features called serifs). It was the inspiration behind the National Trust’s first ever bespoke typeface created in 2009.

The Grotto overlooks a lake. It is a well-loved brick structure covered in Tufa, a variety of limestone formed when carbonate minerals precipitate out of ambient temperature water. It is lit from above by an opening in its dome. It features a sleeping marble nymph, Ariadne, who lies behind the inscription.

This project is a part of Stourhead’s fundraising appeal to restore the built landscape at Stourhead. It is the first of a series of small restoration projects taking place this autumn. If you feel like making a donation visit the website www.nationaltrust.org.uk/stourhead.

Other work includes repairs to the Temple of Apollo to lessen the visual impact of grafitti on it, as well as stonework repairs to it and the best online slots to win money Obelisk. Later, repairs will also be made to the dipping pond in the walled garden, which is a part of a Victorian drainage system.

Earlier in the year, Cliveden Conservation was a Grand Prix winner of the European Heritage Awards, presented in Madrid. It gained the Award for its work on the Gothic Tower folly at Wimpole Hall in Cambridgeshire. The project has also been entered in the Natural Stone Awards being presented in London on 2 December by Michael Portillo (click here to book your seat at the Awards).

The restoration of the Gothic Tower, which is in Wimpole Hall park, presented challenges. The Tower was intended as a prospect house and focal point in the Wimpole parkland, with its Lancelot ‘Capability’ Brown landscaping. The Tower is a pseudo-medieval ruin of a castle, based on a sketch by the architect Sanderson Miller in 1749 for his friend and patron, Lord Hardwicke, the owner of Wimpole Hall.

Over the following centuries, the ruin suffered extensive damage due to the vulnerability of its carefully-designed broken edges, blank windows, missing battlements and open roof. Its crenellation, which was such an important characteristic of the Tower, was almost completely missing. Public access to the area was limited and the folly itself was obscured by an overgrowth of brambles.

The restoration called for a lengthy period of extensive research and a lot of thought around the issues of restoring a structure built with the intention of appearing to be a ruin. Preserving its weathered beauty was paramount.

In the 19th and early 20th centuries, the Tower was occupied by servants from the Hall. The social history of this aspect was researched in detail and an archaeological survey was carried out with the help of volunteers.

"Intellectually, this project raises interesting questions about the preservation of a designed ruin and inspires thought about the nature of conservation. It is informed by detailed research and archaeological recordings and is a model of co-operative endeavour," reported the jury in the European Heritage Awards.

The main structure has been stabilised and is now restored and reintegrated into the walks and experience of the surrounding parkland. The masonry of the crenellation and the arrow-slit windows have been re-established fully while the interiors have been preserved 'as found'.

The servants’ quarters have been kept as they were to serve as a monument to historical and social change. "This is a unique example of a folly in its intended and specially designed idyllic landscape by Capability Brown. Its clever restoration has returned this beautiful landmark to the public and has enriched our knowledge of the social and cultural history of the estate," said the Awards jury.