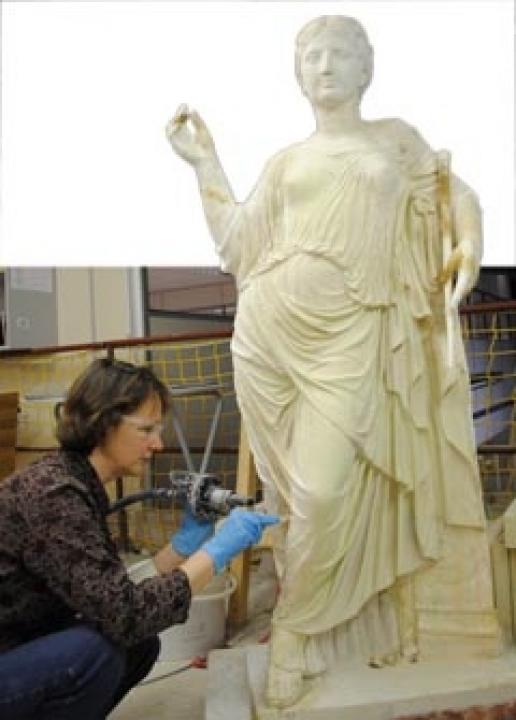 Stone conservation students at City of Bath College have been getting stuck into some live conservation work on sculptures for Bath city centre.

They have started repairing a second 19th century statue that used to have pride of place in the centre of the city.

Last summer, the students successfully conserved a precious statue of a Grecian woman, thought to have been carved in the 1820s.

The gesso statue arrived at the College’s Construction Skills Centre in hundreds of pieces and covered with more than 50 layers of paint, but was painstakingly rebuilt, cleaned and restored.

A second statue, of a Greco-Roman Muse, is now being restored by the talented trainee conservators in the hope that the two statues can be reinstated in The Corridor in Bath.

There is a question mark over the history of the statues, which were two of four that once stood in The Corridor. It is believed that they might have been damaged in the 1974 IRA bomb blast, although nobody has been able to confirm this.

Working at the College’s Construction Skills Centre, the students have remade both of the statue’s arms from the elbows to the hands and cleaned off around 60 layers of paint.

One of the students currently working on the second statue is Alice Kingma Lee (pictured below). “I’m enjoying the project so much,” she said. “The cleaning process is hard work – you have to be meticulous – but it’s very rewarding. To be working on something so old with such a history is why I chose to do this course.”

Students from the College’s Architectural Stone Conservation course have led on the statue conservation project, which is being run in conjunction with Bath & North East Somerset Council and the Bath Preservation Trust. The project is being overseen and funded by the World Heritage Site Enhancement Fund.

There are stonemasonry apprenticeships available through City of Bath College. For more information contact Stacey Harper on 01225 328729 or email [email protected]