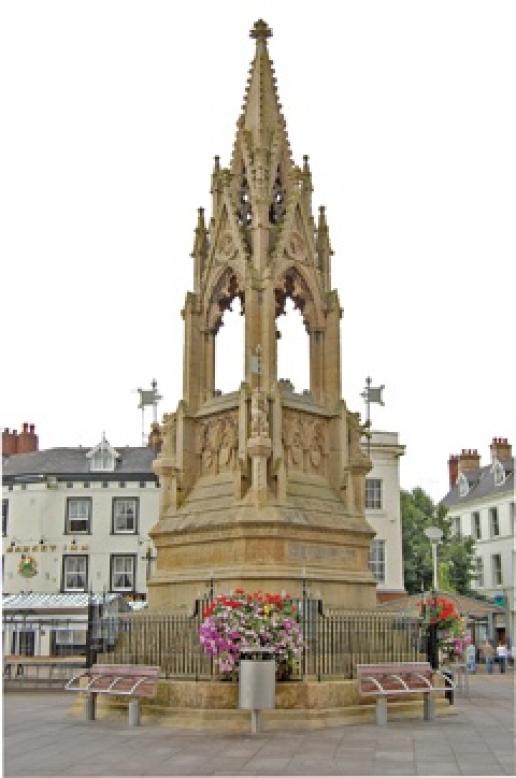 Since Jo Bonser took over the family firm where she had worked for 17 years three years ago she has put a lot of effort into expanding the business out from the masonry cleaning base for which the company is best known into a broader arena of conservation, restoration and renovation.

One of their latest projects is the restoration and extension of the 1830s Grade II listed Westfield Folk House in Mansfield, not too far from their base in Newark, Nottinghamshire.

The Folk House is pictured above right. It is Mansfield White limestone, although it does not look much like it at the moment. It will be given a Jos clean but the conservation officer does not want it to look new. The 1,000m2, two- storey extension that is replacing a smaller 1960s extension is going to be in Stanton Moor gritstone from Stancliffe. The new space will house activity areas, café bars and offices. Stanton Moor split faced and ashlar has been chosen for the extension as Bonsers could not source any new Mansfield White.

When they needed Mansfield White to repair the Bentick Memorial, also in Mansfield (pictured right) four years ago, Cadeby Stone were given permission to go into the now closed Britannia Quarry to recover some blocks that had already been removed from the face to supply to Bonsers. Some sizeable blocks were needed to carve replacement lions on two of the four corners, but the stone was not available for the Folk House extension. For repairs to the existing building, stone recovered from elsewhere that the County Council has stored will be used.

Although the Folk House is owned by Mansfield District Council, it is used by Nottingham County Council as a youth centre and it is the County Council that is the client for the £6.5million make-over.

The Government's Myplace fund is contributing £5million towards the transformation of the centre, with the remaining £1.5million coming from the County Council. The centre is one of 64 youth projects nationally to succeed in getting a Myplace grant.

Bonsers moved on to site for the Folk House project at the start of the year and expect to finish by the end of this year, with the official re-opening next year.

Another project that some of their 25 employees are currently working on is the repair of a marble reredos at St Giles’ Church in Normanton, Derbyshire.

The reredos is believed to be about 200 years old. It was erected without adequate foundations, which has led to some movement and damage to the 150mm thick marble.

Having been photo-logged, it is now being taken down so that the floor underneath can be strengthened. While it is down it will be refurbished, which involves cleaning it and repairing the marble by removing some of the material from the back of it and mixing it with clear resin to repair the face.

Bonsers have recently taken on an extra operative and say they are struggling to keep up with the work they have, although Jo says: “We’re not recession proof at all, but it depends how you manage your business. We’re still trying hard to get our name out there.

“People associate us with cleaning, which is where we came from. We don’t want to hide that, but we can do more than that. We’re very much on the restoration side, but if the project involves building work we can do that as well.”

Bonsers do not deal exclusively with stone and also have experts in brick, wood, lead and terracotta. And as well as expanding the scope of the work the company carries out, Jo is also expanding their geographical spread. Lately Bonsers have been working on a private property in Henley on Thames and have been involved in cleaning the House of Fraser at Victoria in London.