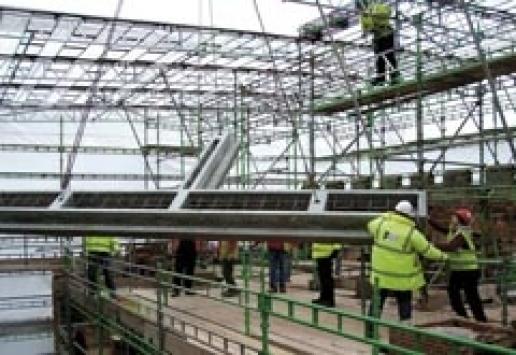 There are not many buildings with a more distinguished history than Astley Castle in Warwickshire. It was the family home of three medieval queens, including Lady Jane Grey, who was Queen for nine days before being executed by Queen Mary in 1554.

But after being gutted by fire in 1978, by which time it had become a hotel, the castle was left derelict and increasingly overgrown as the years went by. It deteriorated to the point that English Heritage put it on its Buildings at Risk register as a priority.

In 2007 the Landmark Trust stepped in to save what was left of the moated sandstone castle. It held an architectural competition to design a new building to go inside Astley’s ruins so the ruins themselves could be preserved. The aim is to rent the building out as a holiday let.

It is an interesting solution, adhering to William Morris’s conservation edicts when he established the Society for the Protection of Ancient Buildings (SPAB) 130-odd years ago that any new work should be designed in the latest style and that it should be possible to remove any interventions.

The work now being undertaken at the site by York and Manchester based building, stone and restoration specialists William Anelay under the direction of architects Witherford Watson Mann, involves putting a two-storey building within the oldest (12th century) part of the ruin.

The new building uses the existing walls and includes large expanses of glass. Bedrooms will be on the ground floor while the upper room will have an exposed timber roof supported on hefty concrete beams that were installed earlier this year. It is modern but will have the character of an open medieval banqueting hall.

The walls of the 17th century part of Astley Castle are being retained as a courtyard left open to the sky but with concrete beams tying them back to the new house to secure them.

Repairs to the existing stone walls of Astley that William Anelay are carrying out are fairly extensive but should nevertheless leave Astley being perceived as a ruin when the work has been completed. Where the original walls form part of the new building’s interiors, they will be left as raw stone to give visitors both a view of and a feeling for the original fabric of this most significant of buildings.