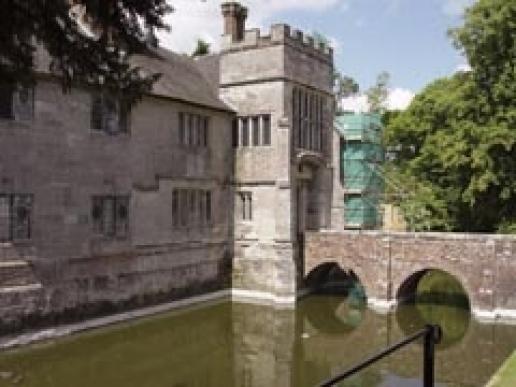 Baddesley Clinton is a moated house in Warwickshire owned by the National Trust. Repair work currently under way uses Arden Sandstone quarried from the same, local source as that used in the original construction of the house, following the re-opening of a nearby delve. National Trust consultant geologist Maurice Rogers spoke to NSS about the project.

Baddesley Clinton is a picturesque moated house that started life as a farmstead and has evolved over the years. The oldest of the existing buildings dates back to the 15th century, when they were a haven for persecuted Catholics – the house has three priest’s holes. There is a delightful garden with stewponds and a romantic lake and nature walk.

Various materials, including brick, have been used for the building work over the years as the site has been developed, but the stone used for the oldest part of the buildings, in particular the front with its bridge across the moat, is Arden Sandstone.

Warwickshire has a diverse geology that gives it an interesting range of building limestones and sandstones. That diversity has prompted geologist Maurice Rogers to say: “In many cases in Warwickshire the need to match aesthetically should override any suggestion that a first class weather resistant stone takes preference over the local stone.”

He made this statement in a technical report he has authored on the building stones of Warwickshire, which came about as a result of his involvement in one of the early surveys being carried out for the Strategic Stone Study, the ambitious project to map England’s building stones and the properties built from them. The Strategic Stone Study has been paid for and led by English Heritage and produced in co-operation with the British Geological Survey.

When the National Trust wanted to carry out repairs and renovation work to Baddesley Clinton they turned to Maurice Rogers for his advice.

Maurice describes Arden Sandstone as one of the distinctive building stones of Warwickshire. Although it is a Triassic white sandstone, it is only 56% silica, whereas other sandstones might more typically be 80% silica. It is perhaps better described as a Dolomitic siltstone.

The silica also appears in an unusual form. Under a microscope it can be seen as fine grains of quartz with white flecks of dolomite in between. The only explanation Maurice can give for the presence of dolomite is that the stone was biologically formed – ie there was a lot of algae present in the shallow river in which the silt that became the stone was laid down.

Arden stone also contains a large amount of Calcium Carbonate (lime) originating from the shells of creatures that lived in the water. Without the lime the stone would not have the reddish hue it develops over time. The colour comes from algae, Trentepohlia iolithus, that grows only on lime-bearing stone. If you rub the surface of the stone the damaged algae can be seen as an orange / ochre colour (see the photograph top left).

Triassic sandstone can be white or red and those carrying out previous work at Baddesley Clinton not aware of the cause of the colour have tried to match it by using an inappropriate red sandstone (see the picture of the window on the next page).

At a neighbouring church built of the same stone, Grinshill sandstone, which can be red and white and is quarried near Shrewsbury, has been used for repairs. It is a fine building stone but the algae do not colonise it and it is harder and less porous than the Arden stone (which has a relatively low density of less than 2tonnes per cubic metre). Using a harder, less porous stone for repairs could be detrimental to the Arden stone in the long term.

In the Technical Advice Note Identifying & Sourcing Stone for Historic Building Repair in 2006, English Heritage said that when replacing stone, porosity should be considered: “Both the overall value of the porosity and the pore-size distribution should be as close as possible to those of the original stone. If a stone with the same porosity and permeability cannot be found, use one with a higher rather than lower porosity. Any subsequent degradation is then more likely to occur in the new stone rather than in the original fabric.”

Another issue Maurice has with replacement stone is using it so it stands proud of the weathered surface to reflect the original building line. While it might be desirable for replacement stone to adhere to the original lines of the building and to be easily identifiable as new work to maintain the integrity of the structure, hard edges create microclimates around them that can cause an abrasive action equivalent to sandblasting. Simply bevelling the edges of the joining stones can reduce the effect.

Interestingly, while Arden sandstone is relatively porous and the wall of it stands in the water of the moat at Baddesley Clinton, there is no rising damp. The original quarried stone surface from which the first stones were taken for construction are in the moat and can be seen now the water level has been lowered for the restoration work. They also retain their integrity after 1,000 years of being below the water level.

Maurice believes the reason the stone is not becoming saturated and why there is no rising damp is that it is being sealed, thanks to its relatively high lime content and the calcium and magnesium dissolved in the water. He believes the pores of the stone have effectively furred up.

The repair work at Baddesley Clinton is being carried out by Croft Building Conservation. It involves the replacement of some of the window mullions, cills and hoods and some repairs to the ashlar, notably around a chimney. Hard cement pointing and repairs that have been carried out over the years are also being replaced using lime mortar.

Part of the National Trust’s reason for consulting Maurice was so that he could identify a source of stone for the repairs.

His search started with the 400 yard rule (or, these days, the 400m rule). It states the source of stone for medieval buildings can commonly be found within 400 yards of the building. Canals and railways in the 18th and 19th centuries made it logistically feasible to transport stone further but before that builders tended to use materials that were to hand.

Sure enough he found clear evidence of a quarry in what are now woodlands along the roadway to Baddesley Clinton about 400 yards from the house. Nick Rymer from Historic Stone was invited in by the National Trust to extract the stone as the result of a contact he had made at the British Geological Survey seminar, Building a Future for Stone, held in London in 2009.

Maurice chose a site to investigate next to the original workings because he assumed all the best stone would already have been taken from the worked delve. Only two trees had to be felled to allow the excavator on to the site and they hit top quality virgin Arden stone at about 2m below the surface almost immediately.

Nick Rymer is now exploring the possibility of opening other sources of Arden stone for the repair of the many other important buildings in the area that were built of it. “The important thing is making local stones available for conservation,” he told NSS.

They only removed a few blocks from Baddesley Clinton – just enough to carry out the repairs with a little spare – and then restored the site.

Maurice conducted freeze / thaw tests that resulted in no loss of material and the blocks survived temperatures in the quarry over winter of -15ºC without the slightest sign of damage.