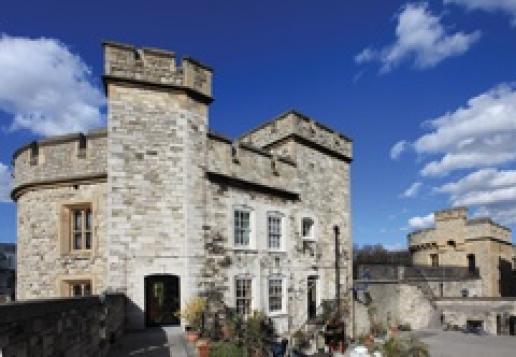 Building work of some kind or another has been almost continuous at the Tower of London since William the Conqueror started building it on the remains of a Roman fort in 1066. And it is not over yet. The latest project has been the conservation of the Devereux Tower with its ancient flanking walls, the most prominent of the outer mural towers seen from the City. The work was carried out by Chichester stone and conservation specialists CWO in close collaboration with the architects, Carden & Godfrey, the client, Historic Royal Palaces, and English Heritage. It was the first phase of a four-year programme to conserve the inner curtain wall on the north side of the Tower of London as part of a 10 year conservation plan. With CWO already having started the next phase of the work, NSS reviews the Devereux Tower project.

The Tower of London is one of the world’s most famous fortresses, visited by hundreds of thousands of people each year. In future, as a result of the latest work, those visitors will be able to walk along the entire length of the north wall on its newly laid York stone paving, which has made it accessible to the public for the first time in its long history. Visitors will be able to explore even more of the fortress than they have previously had access to on the south and east wall walks.

The Tower of London is a World Heritage Site, and although mainly known for its grim reputation of torture and death, has so many more stories to offer. This powerful and enduring symbol of the Norman Conquest has been a royal palace, served as an armoury and even housed a zoo.

The site has been developed and redeveloped by almost every monarch since the conquest. Historic Royal Palaces (HRP) is now conserving this fascinating piece of Britain’s history and, in doing so, is learning more about its long and colourful past.

The repair and conservation work to the Kentish rag stone and magnesian limestone walls of the Devereux Tower was carried out by Chichester stone and conservation specialists CWO (Cathedral Works Organisation) in collaboration with architects Craden & Godfrey, English Heritage and Oxford Archaeology, as well as HRP.

Formerly known as the Develin Tower, what is now called the Devereux Tower is named after Robert Devereux, Earl of Essex, a friend of Queen Elizabeth I until he fell from favour and was incarcerated at the Tower in 1601. He was executed on Tower Green later that year.

The walls of the tower were refaced with Kentish Rag stone when the north section of the inner curtain wall was largely rebuilt and repaired after a fire in the Grand Storehouse in 1841. On the south elevation, Portland and Purbeck limestone ashlar had been used.

The aim of this latest project was to investigate and understand the current level of deterioration of the stone, to slow the rate of decay and to preserve the fabric of the building using traditional materials and methods with as little intervention as possible. It also involved preparing the wall walk ready for visitors.

The mortar to the south-west quadrant of the Devereux Tower was especially heavily eroded, leaving stones exposed and a potential safety risk to both the structure and the people and property around it. Emergency removal of loose stone and mortar was carried out in August 2008 by the White Tower conservation contractors, Carrek, based in Somerset, using rope access.

Fresh inspections of the copper roof covering revealed a deterioration accelerated by poor fixing details at the rolls and heads of the bays, as well as excessive sheet sizes.

The Tower’s Curator of Historic Buildings, Jane Spooner, researched the history of the Devereux Tower and inner curtain wall to give an understanding of what might be found there and where special care needed to be taken.

The roof in particular was an area of interest, since the tower originally had two storeys (it now has three) and had once been used as a gun platform.

The south courtyard adjacent to the Devereux Tower was also of interest as it was due to be resurfaced and the brick vaults below are part of Henry VIII’s ordnance store (now part of the Chapel Crypt).

This area, along with the wall walks, was to be monitored by Oxford Archaeology under a watching brief. Comprehensive geological surveys and fabric history analysis of all surfaces were undertaken to complete the archaeological report.

The works were and are being carried out under the JCT Constructing Excellence Contract (CE), which enabled HRP to engage CWO at an early stage as part of the design team, with the benefit of preliminary works, samples and enabling works being carried out by the stone and conservation specialists before the contract documentation was finalised.

David Baily, a Director of CWO, says: “CWO have worked on several projects for Historic Royal Palaces over the years. It is always a pleasure for us as a specialist restoration contractor to work for a client with such dedication to the preservation of the buildings in their care.

“The necessity of preserving not only these ancient buildings but the craft skills required to make these projects possible, is something HRP have long understood. At CWO we share that ethos and believe the continued training and development of our staff is fundamental in offering our clients the best possible service, enabling us to provide them with more than just the high quality work we produce – they also get the guidance and advice of skilled and experienced craftsmen.”

Initial discussions were held with English Heritage before Scheduled Monument Consent was applied for and granted in March last year. The scaffolding went up in April.

Before work began, samples of the bedding mortar were analysed to inform the selection of a new pointing mortar. Trials were undertaken using varying ratios and constituents of aggregate mixed with moderately hydraulic lime. Cleaning samples were also carried out to determine the degree to which the stonework should be cleaned. All the materials and processes were agreed with English Heritage before work commenced.

Initially, the surfaces were dry-brushed down to remove loose and flaking mortar and friable surfaces of stone. This enabled the architects from Carden & Godfrey to identify areas that needed further cleaning and to start to identify stone and mortar for repair and replacement.

At turret level, the erosion was worse than expected. There were numerous voids, damaged stones and missing pointing. On the curved south-west quadrant of the Devereux Tower the wall was in a similar condition. There had been significantly more previous stone replacement here than in other areas and there were horizontal iron straps visible approximately every third course.

Why the straps were there is not clear. They were each about 1m long and quite close to the surface, so they did not provide any structural support. They were thin in section and narrow, like packing case straps. Such straps have been found in a number of buildings across the Tower of London in areas refaced or rebuilt in the mid 19th century.

The problem of the expansion of rusting ferrous metal used in conjunction with stone is familiar enough in old buildings, so where the straps were visible they were carefully removed.

Where stone replacement was necessary, Kentish Rag was relatively easy to source because it is still in production in Kent today – stone from Gallagher’s Quarry near Maidstone was used – but it was more difficult to find a source of matching Magnesian limestone for dressings and mouldings.

Using recommendations from the geologists, architects and contractors, and in consultation with English Heritage, it was agreed a suitable alternative in colour, finish and density was to be found in the russet coloured Hampole stone from Warmsworth Stone in Doncaster.

Where brushing down the walls had stabilised the surface no more intervention was necessary, but where there was more encrusted sulphation and dirt build-up a nebuliser spray and the Jos / Torc abrasive system were used.

Along the inner curtain wall the pointing was particularly hard in some areas and as much as possible was removed. Where areas of small rubble had been used to fill old voids and holes it was agreed these would be left as a record of past structures and repair campaigns.

The lead covering of the roof had been replaced with copper over an older repaired roof in the 1980s. The decision was likely to have been one of economy and it was felt to be important to reinstate a traditional, sand-cast lead covering.

In order to ensure adequate falls and improve the design by increasing the number of lead bays, a revised layout of joists and drips was constructed over the existing repaired roof structure.

The archaeologists were present while the existing coverings were removed to record the roof structure below. There were two large tie beams, which might have been part of the gun platform because they were over-sized for the roof. Other timbers appeared to have been re-used from other areas or replaced as repairs were carried out. Samples were taken of the tie beams to try to date them by their growth rings, although the results are so far inconclusive.

Along the north and west wall walks the surface had been covered in asphalt, which was failing. From previous records these areas were known to have been covered previously with York sandstone, so York stone paving has been used for their restoration. The stone chosen was Elland Edge from Rand & Asquith, laid in random lengths. To help minimise future disturbance to these areas, ducts have been installed under the paving to accommodate electrical and communications cables.

In the Courtyard, asphalt is being replaced like-for-like, with due care being taken not to impact on the remains of the 16th century brick vaulting t survives below. New flush pavement lights have been incorporated to replace defective modern rooflights serving the Chapel Royal of St Peter ad Vincula’s vestry below.

After eight months’ work, the overall effect of the numerous complex conservation decisions that had been made was exposed only as the dense cladding and the scaffolding it had hung on was removed and the Devereux Tower with its ancient flanking walls could be enjoyed again from within the Tower precincts. n