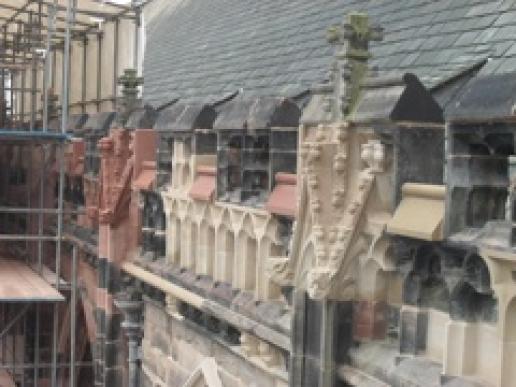 Midland Conservation have rapidly established themselves an enviable reputation in the conservation, restoration and refurbishment of historic buildings. That is not really surprising, because although the company was only formed in October 2007, the founders, Jason Graham and Andrew Cornwell, were formerly managers of the much respected restoration arm of William Sapcote & Sons.

Many of the 52 people now employed by Midland Conservation also came from Sapcotes, which left a big void when it went into administration in 2007.

The company have directly employed skills in stonemasonry, carpentry & joinery, traditional lime plastering and brickwork and a well-established supply chain of sub-contractors specialising in traditional lead work, roofing, leaded light repairs, metal fabrication, decoration and all the other specialities involved in heritage work.

One of their current projects is at the Lady Chapel of Lichfield Cathedral. It includes £971,000 of masonry work alone. Midland Conservation have 18 people on site (including two apprentices), working in masonry shops that have been set up there and fixing the stone – most of which is Corsehill stone from Dunhouse with some Stanton Moor from Stancliffe.

It was part of the contract that the masons should give public displays of their skills every now and then for the benefit of the public who visit the site. The Master Masons share the task. They are expected to stop and talk to the public who ask them questions. Among the visitors has been the Duke of Gloucester, Patron of the Inspires project, who praised the quality of the masons’ work.

The masonry is impressive but stealing the limelight are seven immense 16th century Herkenrode glass windows in the Lady Chapel. They represent the greatest collection of unrestored Renaissance Flemish glass anywhere in the world.

While Lichfield Cathedral is a major feather in the cap of Midland Conservation, it is only one of 12 projects they are currently undertaking, many of scarcely lesser standing.

They include £400,000-worth of work on the facade at Hagley Hall, again using Corsehill; the £350,000 dismantling and rebuilding of the Wychbury Obelisk, with an estimated replacement of 35% of the stone using Hollington Red and Mottled stone; the £700,000 internal re-ordering of St Osbury RC Church in Coventry; and internal works at Aston Hall, Compton Verney and Derby Cathedral Centre.

Jason Graham says Midland Conservation have achieved their four-year growth plan after just over two-years. He says because heritage projects can easily take a couple of years from inception to starting on site the sector might have been cushioned from the effects of recession so far, but he has not noticed any reduction in the number of projects Midland Conservation have been asked to tender for. However, he says he has noticed more names appearing on the tender lists.