Heritage : PAYE put the Cross back into Charing 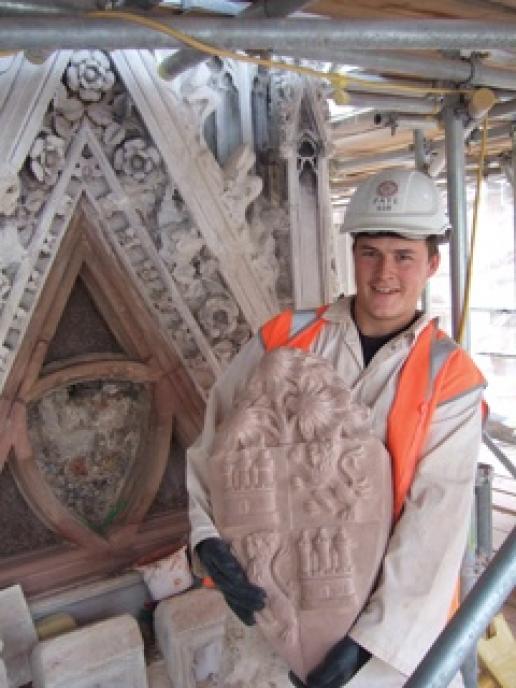 This month (July), after NSS had gone to press, London stone and conservation specialists PAYE were due to remove the scaffolding from around the Grade II* Eleanor Cross at Charing Cross railway station to reveal the restored and cleaned memorial to Eleanor, the wife of Edward I.

The original cross stood a little way off from the site of the current cross. It was said to be the finest of 12 crosses erected at each of the resting places of the body of Eleanor as she was returned to London following her death near Lincoln. The original memorial was destroyed in the Civil War. The cross that exists today was built, mainly from Portland limestone but also with some contrasting stones, in 1865 and is even more ornate than the original. It was designed by EM Berry based on George Gilbert Scott’s Martyrs Memorial in Oxford.

Working on the restoration gave PAYE’s masons a renewed respect for the work of their Victorian counterparts. For example, chequer-boards on the cross have 200 castles carved on them, each a week’s work on its own.

As PAYE removed stones to carry out repairs they found initials, masons’ marks and dates recorded on the reverse of the masonry and have continued the tradition. The picture (right) shows mason Rob Bessell holding a Red Mansfield shield on the back of which the masons have inscribed their initials below the name of the company and the year (see inset picture).

As well as restoring and repairing the stone and the gilded cross itself that sits on top of the monument, the work also involved cleaning the memorial. It had been some time since it had received a thorough clean and various techniques were employed, including steaming, low pressure abrasive, poultices and a traditional masons waterclean. The aim was to remove harmful atmospheric pollutants from the surface of the stone, remove harmful cement mortar repairs that had been carried out previously, remove accumulated debris and vegetation and clear out drainage holes.

PAYE have been employed as a sub-consultant for the cross since 2005, undertaking surveys, making safe and developing the scope and budget of the work that needed to be undertaken. Stones used as necessary for replacement masonry are Portland limestone, Red Mansfield sandstone and Aberdeen granite.

The cross is just one of 25 projects PAYEâ€ˆhave been working on this year.