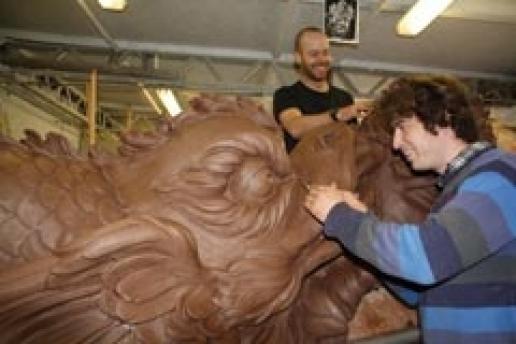 Nobody beats the Royal Family in the heritage stakes and stonemasonry scholars of the Queen Elizabeth Scholarship Trust (QEST) played their part in the Diamond Jubilee celebrations.

First to be seen was the work of Bernard Johnson – a commemorative Welsh slate monolith (pictured right) unveiled by The Queen on the first stop on her jubilee tour, Leicester.

Bernard made a mid-life change of career from publishing to stonemasonry thanks to a bursary from QEST and the guidance of Memorials by Artists. He studied at the City of Bath College from 2003 to 2006 to gain an Intermediate Craft Award. He is now in business concentrating on memorials and other lettered stonework.

He says he does not usually have to work as quickly as he did for the Jubilee memorial, commissioned by the director of St Martin’s House (Leicester Cathedral's conference centre) less than five weeks before he had to install it.

“I was to design something modern and unfussy and had a fairly free hand with the lettering. Following approval of my roughs by the church and Buckingham Palace, I started work on the Welsh slate from Cwt-y-Bugail quarry supplied to me by Barham Stone in Leicestershire, who supply a lot of my stone.”

The stone is 95cm heigh x 28cm wide x 3.5cm thick. Another 25cm is below ground, anchored with steel pins into concrete. It was installed by Bernard and maintenance staff from St Martin’s House. It took Bernard two days to lay out the lettering and five days to cut it using a 5mm lettering chisel.

Two more QESTâ€ˆscholars, Will Davies and Tom Nicholls, were part of the team of seven from the City & Guilds of London Art School (where they are currently expanding their stonemasonry and carving skills thanks to the QEST scholarship) that made the magnificent gilded sculpture on the prow of the Royal Barge at the head of the 1,000-boat Thames Pageant.

The sculpture was designed by Alan Lamb, head of historic carving at the art school, with Emmy-winning Production Designer Joseph Bennett. It was modelled in more than two tonnes of terracotta clay. A cast was taken from the clay in acrylic resin and gilded with 22ct gold leaf to adorn the front of the Royal Barge.

Two of the students involved, Will Davies and Tom Nicholls, are at the City & Guilds of London Art School furthering their skills in stonemasonry and sculpture thanks to bursaries from the Queen Elizabeth Scholarship Trust (QEST).

The sculpture included images of

Royal Barge Production Designer Joseph Bennett said: “The magnificent sculpture that will adorn the front of the Royal Barge will truly be a thing of beauty. We’re delighted to have been able to tap into the vision and expertise of some of Britain’s highly skilled craftspeople and it has really been a privilege to work with them. The Royal Barge will be the jewel in the crown of the river pageant and with the eyes of the world upon it, it’s a chance for us to display just what Britain and its artisans can achieve.”

Alan Lamb said: “We want to produce a work of art worthy of the occasion but also something that people will find interesting and entertaining as well as majestic .While still based on traditional images, the dolphins and other sea creatures should appeal to children’s (and adults’) sense of fun, while Old Father Thames and Britannia lend the grandeur that the sculpture needs to perform its ceremonial function.”