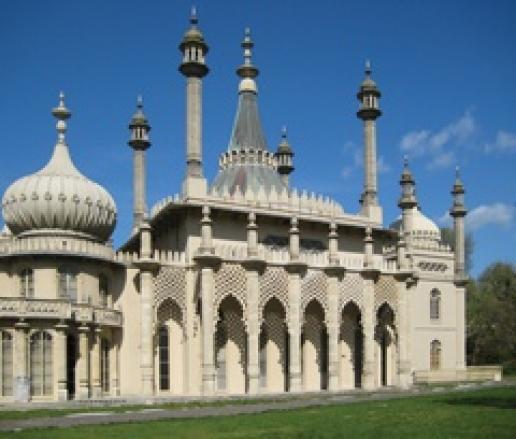 The finishing touches of a major, five-year programme of phased restoration work at the Royal Pavilion in Brighton carried out by Croydon stone and conservation specialists Stonewest are just coming to an end.

Decorations and minor repairs to rendered cornices and soffits should be completed by the end of this month (July) and Stonewest will leave the site where they have had a team of six masons / carvers, a labourer and up to four decorators working at any one time throughout the seven phases of the project, overseen by Stonewest’s Contracts Manager Jeff Dymock. The clients were Brighton & Hove City Council.

Recognition of the work has already started, with a special commendation in the Georgian Society Awards for the exceptional stonework on the Jali screens.

The Pavilion is an extraordinary oriental fantasy created as the seaside residence of George IV while he was Prince Regent. It began as a simple farmhouse, but was transformed first by Henry Holland then, between 1815 and 1823, by John Nash into the extravagant building that can be seen today with its domes, towers and minarets, and rich interiors with elaborate furniture and furnishings.

Stonewest were selected as principal contractors to carry out the phased, five year external refurbishment of the building under a Partnering Contract using the PPC 2000 Contract.

The scope of work was determined from close-hand surveys combined with associated costings. The work included the repair and conservation of the ornate Bath stone and Stucco facades together with redecoration of the domes using lead paint.

The pavilion has been subject to a number of previous refurbishment contracts over the years that have included major internal works to return ornate decorations to their original condition.

Maintenance of the external fabric has presented more of a problem because while the sea air might have been good for George IV, it has not been so good for the Bath stone.

From the initial survey it became clear that the use of hard cement-based mortars to repair weathered and defective stonework was now seriously contributing to the accelerated decay of the masonry.

This was even more noticeable in the case of the Jali Screens, the intricate carved stone panels that are one of the buildings most striking features. Following a process of analysis and approval of samples it was decided to use Stoke Ground Bath Stone from Bath Stone Group for the repair and replacement of masonry. The original stone is believed to be Coombe Down Bath stone.

Having examined the screens in consultation with the architects on the project, Julian Harrap Architects, it was decided to carry out a combined programme of repair and replacement to maintain as much of the original material as possible while ensuring the features were structurally sound.

Before any dismantling began, the method of construction needed to be thoroughly understood. This led to in-depth research of the works undertaken during the 1980s.

Using one of these screens and information taken from the originals, bed moulds and sections were established. More than 50 individual pieces of information were required to replicate theses highly crafted embellishments accurately.

To maintain continuity and minimise additional trimming in, a banker shop was set up on site.

Blocks of the Stoke Ground stone sawn six sides were delivered to site, where they were hand carved, some of the larger sections taking more than three weeks to complete. New merlons for the roof, decorative column bases and projecting carved capitals were also hand worked on site.

“This project was not without its challenges,” says Jeff Dymock. “One of the most testing jobs occurred when we discovered a fracture to the steel shaft under one of the capitals. This had to be treated and the stone surrounding the fracture re-made, but it did finally turn out to be a successful approach and the amount of new stonework required was kept to a minimum.”

On another occasion, as the masons were working around one side of the Pavilion, a leak was discovered on one of the flat roofs, which was damaging the interior. To solve this, the Stonewest team removed the lead, treated the roof, then re-layed the lead.

The process of fixing the new screens was complex as the sections had to be individually supported until their mirror image was in position and they could be pointed and grouted up. In the columns, stainless steel plates were introduced, replacing the original iron fixings.