Heritage : The true art of restoration 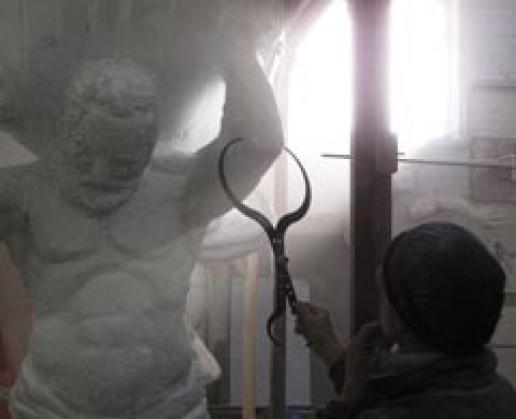 In the March issue of Natural Stone Specialist, sculptor Tim Crawley, a Director of masons and carvers Fairhaven & Woods in Cambridge, argued that the reinstatement of an Elizabethan garden at Kenilworth Castle with the Carrara marble fountain he designed did constitute restoration, even though he could not know precisely what the original fountain looked like. Some conservation purists have argued otherwise. Whatever your opinion about the decision to recreate the garden with its fountain, there is no doubting the excellence of the carving of the marble fountain produced. Here, Tim Crawley continues the story by explaining how the fountain was actually made and installed in the garden.

When I discussed the design of the new fountain at Kenilworth Castle in the March issue of Natural Stone Specialist I tried to show how the greatest effort was made to create an ‘authentic’ design, incorporating evidence from archaeology, documentation and art history.

The techniques used to create the design corresponded exactly with those established in the Renaissance period, using sketches, measured drawings and clay and plaster models.

Having arrived at the completed design in this way, it remained to realise it in marble, transport it to Kenilworth and to fix and commission the fountain.

The intention of this article is to describe the way in which this was achieved, referring back to historical evidence to demonstrate how the techniques used, like those of the design process, derive from past traditions.

A very demanding deadline meant that only 15 months were available in which to complete the project. This made the first priority the sourcing of the marble, so that the carving work could begin as soon as the models were completed.

The use of white marble in England in the Elizabethan period was rare. It was only used in work of the highest quality because of the expense and difficulty of its importation, presumably from Italy. The tomb of Henry VIII, for instance, was produced in marble, as was that of Mary Queen of Scots, carved by Cornelius Cure in 1607-12.

There is documentary evidence from the period that in 1586-7, 84 cubic feet of white marble which had been kept in store for the royal tombs was assigned to Hampton Court for use in the making of a fountain.

This is a revealing reference, demonstrating the importation of the material and its obvious high value.

The evidence for the use of marble at Kenilworth is twofold. Firstly, in a letter written in 1575 as an eye-witness account by Robert Langham, a “rich and hard white marble” is described as being used for the fountain. Secondly, the archeological investigations of the site discovered some small fragments of marble, identified as consistent with the type found at Carrara.

A visit to Italy to select suitable blocks for the work was essential. There are numerous quarries producing a wide range of different categories of marble in Carrara. ‘Statuario’ is regarded as the highest quality. It is a translucent ivory white. The most prized is that without veins, but is extremely hard to find in blocks of any size. Statuario is best suited to internal work, where its fine quality can be better appreciated and it is not exposed to the elements, as it is not particularly durable and is subject to deterioration.

For these reasons the use of Statuario for the fountain was not appropriate. The marble selected as most suitable was a Carrara ‘C’ (there is no ‘A’ or ‘B’), which has a light greyish colouration when polished.

The selection procedure involved identifying blocks that would be large enough for the carving of the Atlantes to be produced in a single piece, free of heavy veining and also free of vents or faults.

When unpolished and left ‘from the tool’ as the Kenilworth carvings were planned to be the marble is white in appearance.

It was decided in addition that the plain and moulded surfaces of the plinths, jambs and copings and the turned column of the central pedestal would be produced in a veined Carrara, fine honed to a light polish to accentuate its character and to contrast with the carved elements. Just such a selection may be seen in one of the fountains illustrated in the Lumley Inventory of 1593 (a list of artifacts made for Henry VIII’s Nonsuch Palace).

After an exhaustive tour of the many stockyards in Carrara which hold the freshly quarried marble, two blocks were selected, weighing in at 17 and 22 tonnes.

Primary sawing was carried out in Italy, along with core drilling the statue and column blocks. This was necessary in order to accommodate a central armature pipe in stainless steel, which was demanded by contemporary structural engineering and health and safety requirements. This was one feature of the modern fountain that would not have been incorporated in the original. From a technical point of view this was a difficult operation. The diameter of the core was 140mm, and the length 2.2m, thus requiring boring from both ends of the block.

Six months after the commencement of the project, with the models completed and the marble delivered to the workshop in Cambridge, carving could finally begin.

For bronze statuary, a model the size of the completed sculpture is required from which to produce the necessary moulds. In stone and marble sculpture, the model is transferred into the final material by a method known as ‘pointing’, which is taking co-ordinates in three dimensions from the surface of the model, transferring these into the stone by drilling, then removing the excess material around the point found. A series of points is selected which establishes the relative positions of key elements, such as the tip of the nose and fingers, for instance. Using these as a guide the carver can confidently rough out the work.

The beauty of the system is that it is not necessary to work from a full size model because in the final ‘pointing’ into the stone the co-ordinates taken from the model may be enlarged to whatever scale is required. In the case of the Kenilworth project, it was decided to make the large scale model two-thirds life size – large enough to fully resolve all the necessary detail, but demanding less time and materials in the modelling and casting process to follow.

The history of the pointing process goes back to the classical period of Ancient Greece and Rome and there is evidence of several methods. In the early Renaissance period of the mid 15th century Leon Batista Alberti’s treatise De Statua described a ‘definitor’, a simple pointing device consisting of a circular disc with a pivoting rod attached to it and a plumb line hanging from the end of the rod from which measurements in depth could be taken.

About 1490, Leonardo da Vinci described his own method for pointing, although it would have been entirely impractical to use.

Another recorded example relates to the marble block used for Michelangelo’s colossal figure of David. This had originally been part worked by Agostino di Duccio for a figure commissioned by the Cathedral authorities in Florence and the existence of a wax model for this statue is recorded.

When Michelangelo took over the block he removed a protruding knob of stone on the existing figure’s chest. This would have been the ‘capo punti’ (chief point) which is the critical reference point used for the compass method of pointing (too involved to describe here but still used in Italy today).

The technique used for the Kenilworth statue employed a system that could easily have been manufactured in the 16th century by a skilled craftsman. It is known as the chassis method. Firstly, a frame was set up around the model to provide four cardinal planes. A ‘T’ square was constructed to hang from the frame, which was provided with a sliding stock through which a pointer could be moved in and out. With calibrations on the frame, the square and the pointer, it was possible to take three co-ordinates from any point on the surface of the model.

The carving technique then employed to realise the finished statue was perfectly traditional.

In the past, the hand carving of marble was a punishing and laborious task. Things are no less arduous today, although the use of power tools speeds up the process.

The primary roughing out stage is now assisted with the use of diamond cutting discs, which allow for rib cutting and the pitching off of large chunks of material. When chisels are used they can be driven by pneumatic hammers.

The sequence of tools used is just as in the past: points, punches, claws of varying grade, flat and bullnosed chisels.

The basic principle of carving is the systematic refinement of the form from initial broad planes and masses towards increasing detail and finish. The pointing technique allows confident roughing out, but the success of the piece still depends on the skilled eye and hand of an experienced carver to interpret and reproduce the forms of the model.

Marble is a demanding material to work but is rewarding for the carver because it retains fine detail and is capable of a great range of finishes up to a high polish. Also, being slightly translucent, marble has a depth and life to its surface that makes it ideal for use in figurative sculpture.

Six weeks before the Easter deadline for the opening of the garden to the public the various components were crated up and delivered to Kenilworth for installation.

The structure was based on the town fountain of Freisach in Austria, dated 1568. The Kenilworth fountain is a traditional solid masonry construction of moulded and carved elements laid on to a foundation and a central core, bedded and pointed with lime mortar. Being octagonal in plan, dog-cramps linking together all the components across the perpendicular joints and dowels inserted into the top and bottom beds ensure an extremely strong construction more than capable of restraining the outward pressure exerted by the weight of the water when the fountain is filled.

All the elements were lifted into position using slings or lewis pins with a block and tackle hung from a scaffold. The process would have been just the same in the Elizabethan period, although more primitive equipment must have been used – wooden scaffolding; blocks and tackles and ropes as used in ships rigging; rubble or brick infill and foundations; horses and carts for transport (there is plenty of documentary evidence for road haulage of statuary going back to the late medieval period).

In conclusion, the principle adopted for the design, construction and fixing of the fountain was to reproduce as far as possible the materials and techniques that would have been used originally. With the exception of the concrete foundations and a few stainless steel components replacing lead or iron, this was achieved.