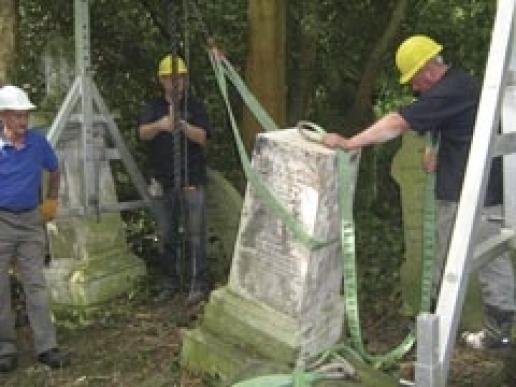 David Francis, who writes the Grave Matters column in this magazine, has this year been involved in making safe and refixing some of the memorials in the historic London cemetery of Abney Park, Stoke Newington.

During the time he and his colleagues were working on the site, David also ran a two-day Memorial Course for Islington & Camden cemetery staff, which included using Abney Park for the second day of training.

Abney Park Cemetery is now run by a Trust with support from the London Borough of Hackney.

It was opened in 1840 on its 32acre site when the City of London burial ground at Bunhill Fields had run out of space. It is a non-conformist cemetery with memorials to William Booth, founder of the Salvation Army, and many of his followers.

A large statue to Isaac Watts, the hymn writer, is prominent near a war memorial, although Isaac Watts’ body was buried at Bunhill Fields. The statue is in Abney Park because Watts wrote many hymns on a mound on the boundary of the cemetery.

A life-size sleeping marble lion monument to Frank Bostock, who owned a menagerie, is on the west path, which is now known as Lion Road.

The Victorian Gothic Chapel in the centre of the site has suffered badly from the ravages of time. Built of brick and Bath stone, the fabric is eroding and cracks are evident in the yellow bricks.

These days the cemetery is a nature reserve with a small visitor centre, a children’s garden and an artist’s carving workshop.

When Abney Park opened in the 19th century it was a landmark for religious tolerance. It was a garden cemetery with magnificent trees and other plants. But it stopped being used for burials in the 1970s and became overgrown and derelict. The Trust has saved it and returned it to being a place of tranquil, though still wild, contemplation.

It is now designated as a Historic Park & Garden by English Heritage.

Partly as a result of suffering from decades of neglect, Abney Park requires work from time to time to keep its large, Victorian memorials safe, as all areas are open to the public. However, it is also a place for nature and there is a policy of minimal intervention, with just the paths kept clear and rubbish removed.

The contract for the safety work was carried out by David in conjunction with Douglas Swan & Sons from Kirkcudbright in Scotland. A number of memorials had been identified as dangerously leaning or loose. This was mainly the result of sinkage and the memorials had to be taken down as a safety measure. Fortunately, some prominent memorials could be dismantled, levelled and refixed. One listed memorial was included in the work.

A number of the memorials taken down were of pedestal and cap construction in both Portland limestone and marble.

Some of the pedestals were built from four pieces of stone held together with iron clamps. These were strapped where possible and lifted apart. They were placed on or near the grave space with inscriptions uppermost so they could be read.

For the larger memorials, a mobile gantry was required, the use of which was demonstrated to the Islington & Camden team, who were also shown how a full grave memorial could be refixed and heavy pieces of stone could be moved with boards and rollers.

In this kind of contract, much time has to be spent finding memorials and cutting back the foliage for safe working, although the Trust was anxious that no tress were damaged.

David says: “We worked to the Trust’s guidelines so that trees were preserved and there was as little disturbance to wildlife as possible – especially the bats.”