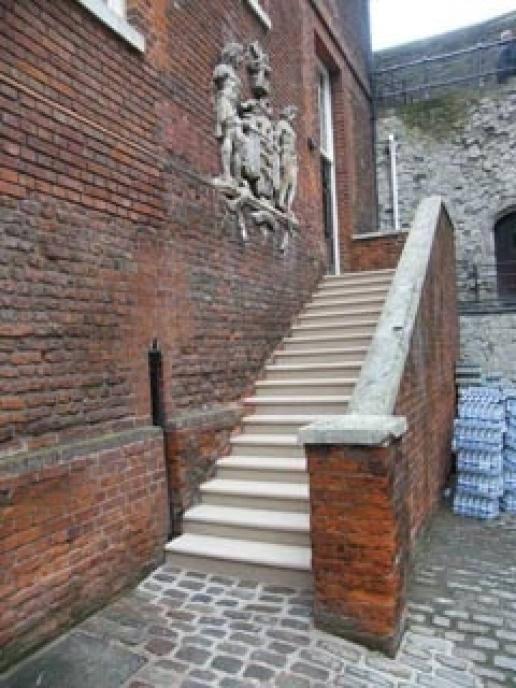 A building the size and age of the Tower of London requires constant attention and the latest project there was to refurbish the southern steps of the New Armouries building in the south-eastern corner of the castle’s inner ward using Portland Whitbed limestone.

The New Armories was built of red brick in 1663-4. It is now the only Ordnance storehouse to survive at the Tower, the rest having been demolished in the 19th century, and is the oldest surviving Ordnance building in the country.

The southern steps that have now been restored by London Stone Conservation, HM Royal Palace’s nominated specialist sub-contractor for work at the Tower of London, allow access from the ground floor of the building to the inner ward.

The steps are not part of the original 17th century brickwork but have been sympathetically constructed in a similar red brick in the same English bond as the rest of the building. Plans of the Tower dating from the 1680s and 1845 show steps in this position, although pre-cast concrete steps were added in 1933 when the stores were converted to barracks.

London Stone Conservation were required to remedy the failing cement screed on the southern steps, which was a modern, poor addition to the 1930s concrete steps. It was removed and new Portland Whitbed treads and rises from Stone Firms were installed.

They were fixed using joggles rather than physical fixings and were bedded using NHL3.5 hydraulic lime mortar, washed sharp sand, fine washed sand and stone dust at a ratio of1:2:1:0.5. It was agreed that the stone, bedding and pointing mortar should be allowed to ‘mellow’ naturally and no attempt was made to match them to the adjacent pointing of the brickwork in terms of patina.

The works were required due to the deterioration of the modern cementitious surface screed layer over the brick core. The stairs, treads and risers were both uneven and delaminating and had become unsafe as well as being unsightly.

The bottom step was significantly lower at its northern point where it abutted the building than at the other end because it sits on a distinct slope. This was remedied by lifting and re-bedding the granite sets at the bottom of the stairs. The work was closely monitored and supervised by the Tower of London Curator to ensure that there was no disturbance to any archaeology.

The end result is in keeping with the embellishments made in the 1940s. The work has been carried out to a high standard and significantly enhances the presentation of the site.