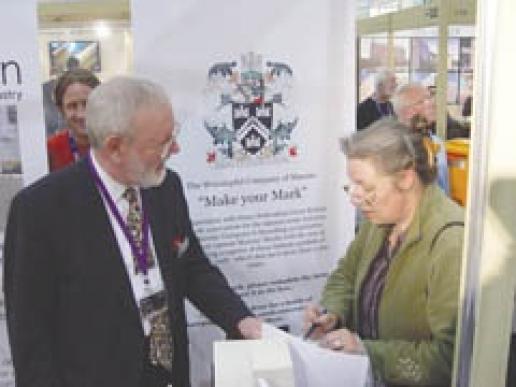 For centuries masons have cut their individual marks into the stone they have worked to identify it as theirs. But the marks left over the millennia cannot normally be traced back to the craftsmen who left them there. The Masons Livery Company is compiling a register of today’s masons marks for posterity, so that future generations will be able to put a name to the stonemasons who have built and repaired some of today’s most important buildings.

Most people who have worked on old stone buildings will have come across the marks left on the masonry by previous generations of stonemasons. These ‘masons marks’ are usually discreetly hidden away so they are seen again only during renovation work, a nod across the centuries from one generation of craftsmen to another.

It is not usually possible to identify the individual who left the mark, which the Masons Livery Company thought was a shame. So, in 2013, it, in conjunction with Stone Federation Great Britain, decided to start a register of today’s masons marks to enable future generations to put a name to the masons who are carrying out repairs to the nation’s historical buildings and producing the masonry for some of the finest contemporary architecture.

The Masons Livery Company, known as the Worshipful Company of Masons, that is compiling and maintaining the register was formed in medieval times as one of the trade guilds of the City of London. Its records date back to 1356 and it is one of the oldest of the Livery Companies that still play their part in the administration of the City.

In medieval London, the main role of the Livery Companies was to regulate the trades they represented. For the Masons Company that meant ensuring stone buildings were constructed to the highest standards by properly apprenticed and suitably skilled stonemasons working in the Cities of London and Westminster – although the Livery Companies were also instrumental in maintaining the influence of London well beyond the city walls.

The Masons Company is still closely associated with the trade of stonemasonry and has ties with many other Livery Companies (of which there are now 110), especially those related to the construction industry. And it is still playing its part in ensuring the skills of stonemasonry survive and prosper by supporting training, not just in London but across the country.

In 2007 The Company launched the Duke of Gloucester Awards to encourage skilled stonemasons and craftsmen from all over England to develop their careers. The Award recognises the contribution made to the craft of stonemasonry by individuals within the sector. Then, in common with several other Companies, last year it started awarding Master Craftsman certificates to particularly outstanding stonemasons, wherever they may be based in the UK.

The register of masons marks was launched in 2013 and introduced at the Natural Stone Show that year, where the Company had a booth on the Stone Federation’s stand in its ‘Village’ to collect the marks of masons at the Show.

Those collected to date can be seen in an on-line register on the Masons Company website at bit.ly/masons-marks. You can add your mark there – or do it at the Stone Show and you could win a bottle of Champagne.