A model Cotswold Listing at Bourton-on-the-Water 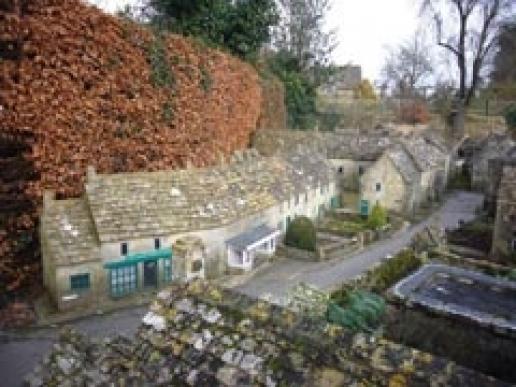 The model village at Bourton-on-the-Water in the Cotswolds is, unusually, a one-ninth scale accurate depiction of the village itself, built from the same Cotswold limestone as the full size houses that it represents, including their limestone roofs.

The model village, which has just become the first to be listed by English Heritage, even has its own stonemason in Lucas Ovecka, who returned to it in September after previously working there eight years ago under an earlier builder who looked after the village.

This summer, Lucas will have the distinction of adding the first new building to the model village since it was opened in 1937 to coincide with the Coronation of King George VI by the landlord of the New Old Pub to attract a burgeoning class of motorists.

The full-size village of Bourton-on-the-Water contains 117 listed buildings. Planning permission to add to those is rare, but it was given for a new shop, Cotswold Sheepskin, to fill a gap in the High Street in 2001.

In order to obtain planning permission, the new shop had to be built sympathetically to its neighbours in the local stone – the same stone that Lucas will now use to produce the scaled-down version of the shop in the model village.

The Grade II Listing status was bestowed on the model village in recognition of its rarity, craftsmanship and historical value.

Unusually, when the model village was constructed it was by eight local craftsmen, rather than model-makers. It took them five years and the buildings are so detailed that you can even see pews inside the church through delicately traceried stained-glass windows.

The model village is also rare in that it was built between the first and second World Wars. Most model villages were constructed in the 1950s and ’60s, or even later.

It was the boom in motoring between the World Wars that prompted Mr and Mrs Morris, who ran the Old New Inn in 1937, to create something to attract this new group of visitors to their pub. The Old New Inn is now also Grade II Listed. These days it only opens daytimes between April and September to cater for the visitors.

The pub stayed in the hands of the Morris family until 1999. They and the subsequent owners have worked to keep the model village as up-to-date as possible, putting up new shop signs and windows as the full-size buildings on which they are modelled undergo changes.

Bourton-on-the-Water is believed to be only the second ever model village built in the UK. The first was Bekonscot at Beaconsfield in Buckinghamshire, created by Roland Callingham in the late 1920s.