New English Heritage to get its own team of stonemasons 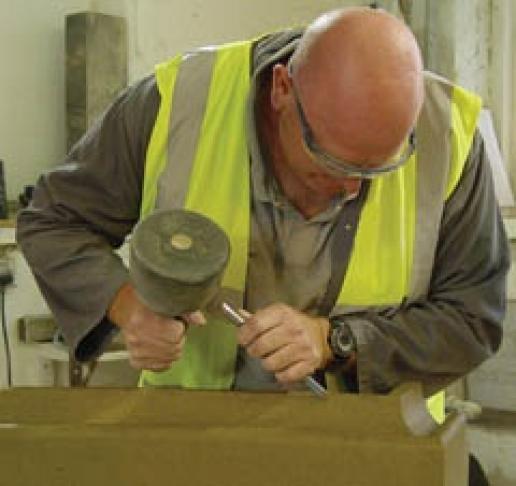 The new English Heritage will have its own team of in-house stonemasons.

The new English Heritage charity, taking over part of the work of the old English Heritage quango (after the dissolution of the quango on 1 April) will have its own team of stonemasons, it was announced yesterday (26 February) at an event officially launching the two new bodies that take over from English Heritage in April.

Following a pilot programme next year, English Heritage will establish the new in-house team of expert stonemasons to provide an invaluable resource of traditional crafts and skills for the maintenance of the nation's historic built heritage.

The new English Heritage charity will use a Government investment of almost £80million to bring and keep the story of England alive through a major programme of interpretation, presentation and conservation. This will allow the stories of individual properties to be fully told and will help the new charity towards self-funding status.

English Heritage already engages with over 10million people each year.

Historic England will champion the historic environment all around us. It will provide expert advice, promote constructive conservation, carry out research and give guidance and grants to everyone from local communities to national policymakers, from owners of listed and older homes to volunteers saving a building at risk.

Historic England will also licence the new English Heritage charity to look after the sites in the National Heritage Collection and appoint trustees to the charity’s board.

Speaking in the Chapter House yesterday, Culture Secretary Sajid Javid said: “For both the people who live here and the scores of visitors who flock to our shores, England’s heritage is easily one of our greatest national assets. But preserving our heritage cannot just be about protecting buildings; we have to understand them better and be able to explain their value and importance to the world.

“The new model launched today allows for just that and will give these bodies the freedom they need to explore new and entrepreneurial ways of protecting, promoting and bringing our heritage to life. By safeguarding our nation’s heritage in this way we will continue to attract visitors to our heritage sites, boosting the country’s tourism industry and driving economic growth for many years to come.”

Sir Laurie Magnus, the Chairman of Historic England Commission, said: “We’ve reached this landmark moment for the future of England’s heritage because of the commitment and support of the whole heritage sector represented here today. I know we can count upon your continuing support for the vital work we all do to ensure that England’s heritage is understood, protected, championed and loved.”

Sir Tim Laurence, Chairman of the English Heritage charity, commented: “People are increasingly looking for experiences that bring history to life. I believe the new charity will be particularly well placed to do this through a combination of imagination, scholarship and an unwavering desire to inspire and entertain visitors to our remarkable collection of historic sites.”

Highlights of the years ahead for English Heritage include the launch of inspirational projects at sites that will capture the imagination of our visitors. This year will see the re-presentation and restoration of the Art Deco Eltham Palace in Greenwich, while to mark the bicentenary of the Battle of Waterloo there will be new exhibitions at those sites associated with the Duke of Wellington (namely, Wellington Arch and Apsley House, in London, and Walmer Castle in Kent.)

Next year at Rievaulx Abbey in North Yorkshire, it will open a new museum to tell the 900-year story of the abbey and display its nationally important collection of artefacts. At the 1066 Battle of Hastings Abbey and Battlefield, it will improve the presentation of the most famous battle fought on English soil, and the abbey and great house that were later built on the site. A new exhibition in the Great Gatehouse of the medieval abbey will incorporate previously unseen artefacts and for the first time visitors will be able to enjoy the view from the roof over the town of Battle, gaining a better understanding of the landscape on which the battle was fought.

There will be the launch of a £52million conservation programme – the biggest in the history of the National Heritage Collection – to clear the backlog of the highest priority repairs at sites across the country, including Hadrian’s Wall, Queen Victoria’s family home, Osborne House, Framlingham Castle and Iron Bridge.

Historic England’s highlights of the year ahead include the launch of 'Enriching the List', a project enabling the public to upload their own information and images to the National Heritage List for England.

Heritage Action Zones will be created, where Historic England's different areas of expertise will be brought to bear to work with local people to unlock the potential of the historic environment.

Major buildings on the Heritage at Risk register will be restored. They include the Wedgwood Museum, Stoke-on-Trent (in partnership with the Prince’s Regeneration Trust), the Grand Hotel, Birmingham, and St Luke’s in Liverpool, known locally as 'the bombed out church' that has stood derelict since World War II.

Murray’s Mill in Ancoats, Manchester, will be regenerated to bring back into use buildings in one of the earliest industrial places in England. Grants will help to restore Temple Mill, an extraordinary Egyptian style textile mill in Leeds, and Wolfeton Riding House, Dorset, one of the oldest in England, dating from the late 16th century.

There will be new online access to more than 620,000 historic photographs of cities, towns and villages all over the country.

This new resource, to be known as England’s Places, will be the digitised version of the famous Architectural Red Boxes that English Heritage had. It will make it possible to delve into the past of favourite places and will complement new websites for Historic England and the English Heritage charity that go live on 16 March.