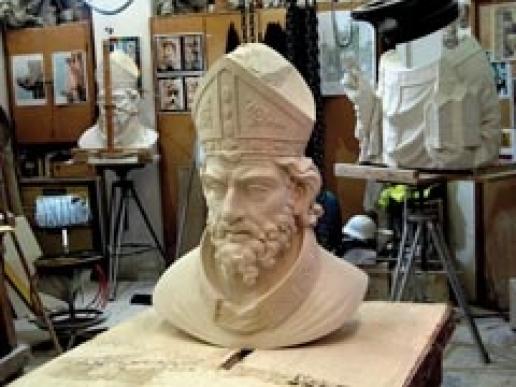 A replacement statue of St Peter in Lepine limestone has been carefully positioned at the top of the East Front of York Minster.

The three sections of the statue were carved to dimensions taken from a clay maquette produced by carver Martin Coward (see NSS March issue), who also carved the head of the stone statue. The other two sections were carved by Dave Willett and Matt Hodgkinson. A new plinth supporting the statue was carved by Tim Foster.

The original statue was badly weathered, so there was some conjecture about exactly what it would have looked like. By using other historical references and a cast of what was left of the original it is hoped the replacement is authentic.

York Minster is built of Magnesium limestone, but it was always appreciated it would be unlikely that blocks of the stone large enough to carve the statue in three sections would be found, so the French oolitic limestone was used instead.

As the head was positioned on the statue the clouds parted and the sun shone on to the face of the new statue of St Peter, adding a poignancy to the moment for the masons.