A new narrative in stone – a reredos for Great Bromley Church, Essex 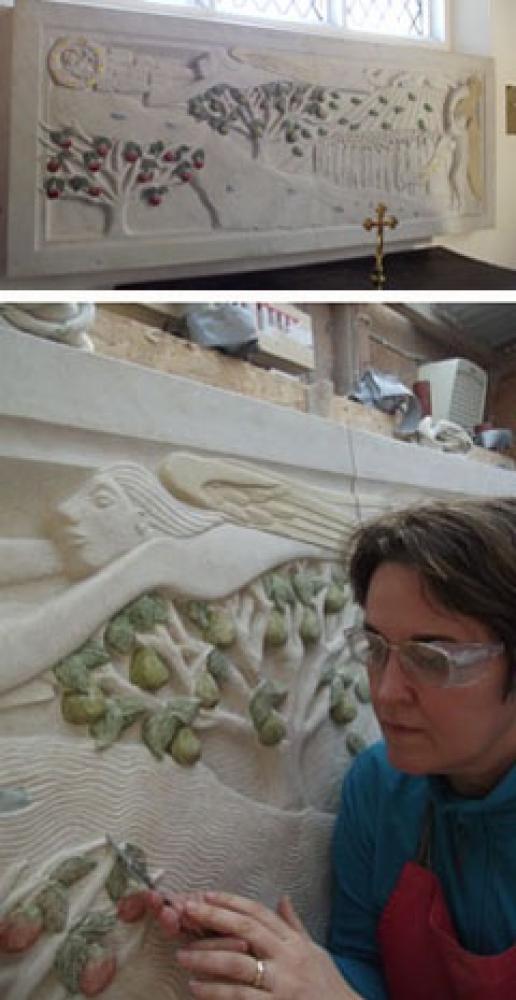 Antonia Hockton working on the reredos in her workshop and the finished work in the church.

The south light plays across the surface, picking out fruit from one of the trees that rest on the bank of a body of water, the river of life. The stone is Ancaster Hard White and I have picked out some details with pigments and gold leaf. As the entrance to the church is at the other end of the aisle, the colour works well to draw people down to look at it and, hopefully, sit and take a little time out of their day.

A passage from Revelation was taken as a source for the new reredos at St George’s Church in Great Bromley, Essex. The space behind the altar table was a blank wall of patched plaster, some raw, the rest a pale green. There lacked a focal point, nothing to offer a contemplative moment out of the day. The brief for me was to find that moment in the bible, a Christian message, and translate it into a narrative to be read and re-read.

The format of a carved narrative is very familiar to me from the Romanesque friezes I have helped to preserve. My introduction began with the one across the west front at Lincoln Cathedral. After art school I had been given an apprenticeship in sculpture conservation there in a small department consisting of one qualified conservator and myself, a trainee. When that came to an end I was able to be part of the much debated work on the crumbling frieze panels. In piecing together the many fragments, making sense of the lost detail, I immersed myself in the heady medieval world of moral messages of life.

This journey with Romanesque friezes did not stop then but continued on to Notre dame la Grande in Poitiers, France. The Lincoln knowledge could be applied to a new set of problems. This exposure to a feast of carving reawakened in me a need to produce my own work again. When I left the French company and returned to England I set up my own business so I could combine the conservation with my art practice. This has continued for the past 20 years – and stone still holds the same fascination for me. To take and shape it from the earth has been going on since humans first learnt to use tools.

Now in the 21st century the rhythm of the hammer and chisel still comes out of my Ipswich workshop to mix with the birdsong. I use the free carving method to give the carvings life and soul and create surprises along the way. The 12th century carvers who tried to guide the population with their stories would have done the same. Now in a side chapel of a beautiful church in rural Essex the narrative continues.