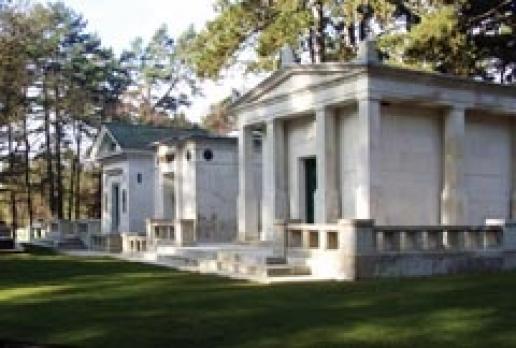 Triton Building Conservation were established in March last year as a sister company to Triton Building Restoration, an external refurbishment company in London. The aim of the new company is to place more emphasis on the specialist refurbishment of buildings with an architectural or historical interest. The move coincided with winning high profile projects including the Foreign & Commonwealth Office, the Old Admiralty Building and the Swan & Edgar Building in Piccadilly.

One of the more unusual projects carried out by the new company has been the conservation of the Portland limestone Tata Mausolea at Brookwood Cemetery in Surrey, which has just been designated Grade I Historic Park and Garden status.

The three mausolea are the resting places of the founding members of the wealthy Indian Tata family.

Following consultation at pre-tender stage, Triton Building Conservation were appointed for the refurbishment of the three buildings and surrounding area on behalf of Calford Seaden.

The mausolea are built in a style that combines Egyptian and Classical features and have, in addition to elaborate gates made of bronze, decorative features such as rosettes, a winged sun on the frieze and polychromatic ceramic plaques to either side of the entrance.

As well as cleaning the stone, the work involved installing a new Aco drainage system and soakaway, a new lead roof, cleaning and repairs to the internal mosaic ceiling, re-gilding the head stones, and re-toning bronze caskets and external motifs. The tomb doors were overhauled and redecorated. A surrounding dwarf wall was dismantled and reconstructed the surrounding areas were landscaped.